Hotdesking, no car parking but a real drive to help children and parents in social work play 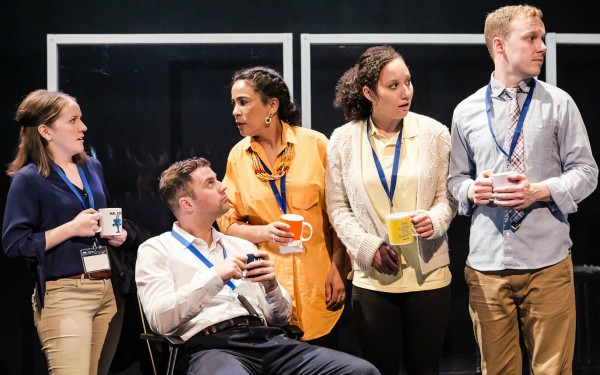 “You’ve been away from your desk for 20 minutes so I’ve logged you out,” says the dull, petty council worker who has nicked Becca’s desk. It’s one of the minor annoyances of Becca’s days – too few desks, being kicked out of meeting rooms by ‘democratic services’, the new management deciding that not everyone needs a parking space – that make up her working life as a senior social worker in an unspecified town in the north.

This may feel all too real to any social worker reading: hot desking and lack of car parking are fairly universal problems in councils across the UK. But Becca is actually a fictional character in new play Left My Desk, an hour-long exploration of what being a social worker in today’s social and political climate is really like. Based on interviews with social workers and research with Frontline, it is perhaps more accurate and supportive of the social work profession than many TV dramas that have aired in recent years. 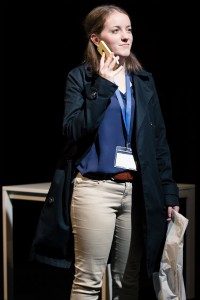 Becca, the senior social worker at the heart of the play, is clearly driven to help the children and parents she works with. There’s the teenage boy she takes to KFC, who skipped school because it’s cooking class and he doesn’t have money for the ingredients. There’s the 23-year-old mum, who has already had several children taken away; she is pregnant and Becca is desperately trying to help her keep the new baby. There’s the dad who is struggling with his toddler daughter, newly in his care and affected by the abuse and neglect she’s already experienced. But the relentlessness of the work and the trauma she witnesses are taking their toll, and we see how it affects her relationship with her partner, a cheery teacher who is worried that her work might make her ill – is perhaps already making her ill. One of the most affecting scenes in the play is when Becca lists the names of all the children and families on her caseload: what will happen to them if she leaves, focuses on herself for a bit?

But despite all this, there are funny scenes in the play too. Becca goes to Boots to buy a pregnancy test, and ends up gabbling to the bemused sales assistant about how it’s a planned baby, she’s not as young as she looks, and her partner is probably going to be made head of department soon, so…. When she and her partner find out she is pregnant, they try out possible baby names, neither of them wanting to pick a name that the kids at work have. As a teacher and a social worker, you suspect they’ll be there a while. And even at work there is humour and support among the team; the resident police officer is called Craig David, leading to much hilarity whenever his namesake’s songs come on the radio. Just like social work, it’s not all bleak – there are uplifting moments too.

Left My Desk is a production from theatre company Lost Watch and is at the New Diorama Theatre in London until 16th June.

2 Responses to Hotdesking, no car parking but a real drive to help children and parents in social work play