By Judy Cooper on October 1, 2018 in Social work leaders, Workforce 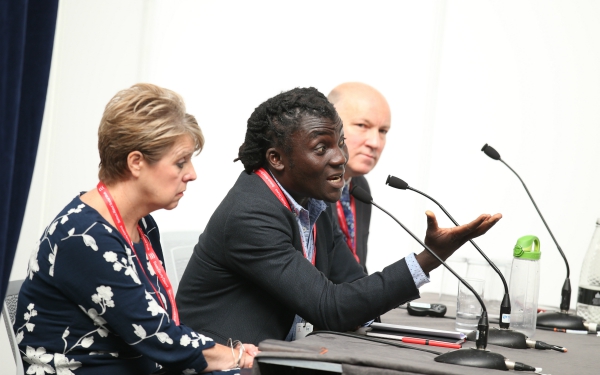 Social work employers and educators must do more to ensure practitioners are supported in handling emotional distress, according to sector leaders.

Speaking at Community Care Live on the issue last week, Paul Angeli, assistant director of children’s social care and youth inclusion at the London Borough of Merton, said emotional distress was at the core of all social work, but employers and managers did not take it seriously enough.

“Distress is the stuff of social work and if it’s not then I don’t know what is, because when you hear a distressed child or a vulnerable adult, if you’re not hearing that distress than as a social worker what is your job? What are you doing? Your job is to help them manage their distress. In order to do that social workers internalise that distress so they can help that person make sense of it. So I would say the management of emotional distress is at the core of social work practice.”

He said senior managers often switched off from it as part of an organisational defensiveness because they weren’t sure what else to do. Instead they should be ensuring they were noticing social workers in distress and the organisation was equipped and able to help them manage it.

He added that emotional distress did not just have a mental impact on workers but there was often a physical impact as well from adrenalin, anxiety and feeling tense.

“If that social worker ends up carrying that distress around with them for days, weeks, even months then surprise, surprise they’re probably going to start looking for another job or even look to leave the profession.”

Louise Grant, head of school for applied social studies at the University of Bedfordshire and a leading researcher in the field of resilience, said social workers were often taught to be very self-critical as part of their reflective practice.

“But the research shows that self-care and self-compassion are some of the most important elements in building resilience amongst social workers.”

Grant said organisations needed to create the right conditions to help social workers recover from difficult experiences and one way to do this was to act as a secure base for social workers to return to.

“It needs to be a safe place for them to talk about things and help explore their feelings. The organisation needs to wrap around them and help them understand that such feelings are not a sign of weakness or failure. Some senior managers shy away from this because they seem to fear distress will become infectious or they don’t want to listen because they don’t know how to deal with it.”

Godfred Boahen, policy and research officer at the British Association of Social Workers (BASW), said the nature of some of the incidents social workers experienced was traumatic, and yet many social workers feared telling their managers in case they were reported to the Health and Care Professions Council (HCPC).

“I’ve got anecdotal evidence of this so we need to think about the regulatory framework that surrounds social workers as well.”

Responding to a question from the audience about poor resilience to distress among newly qualified social workers (NQSWs), Grant agreed some academic institutions were not screening course applicants rigorously enough.

“There are key competencies and capacities that social workers need in order for them to be able to manage difficult situations, and not all social work education provision actually encourages or assesses for them when recruiting to courses.

“The research that I’ve done shows that a key competency is being able to communicate reflectively – to be able to communicate the impact of an experience on you and those around you, and research seems to show that this isn’t a competency that can be taught, it is inherent. So if we are not recruiting people who have that capacity then we are putting them into situations where they will not be able to cope with emotional distress.”

Angeli also made the point that many NQSWs in children’s services were recruited to roles where they were likely to experience the highest levels of emotional distress, such as in referral and assessment or safeguarding teams.

“So we are taking our most vulnerable workers who are in the most need of support in this area and putting them in the most stressful places in the organisation.”

The panellists also agreed social workers had responsibilities in this area such as understanding their own responses and needs, being kinder to each other, encouraging group supervision or peer support in workplaces and helping managers understand what were helpful and unhelpful responses.

How direct work that empowers families is delivering big benefits for social workers in this council
‘Let’s learn’: one council’s path to refreshing its social work practice