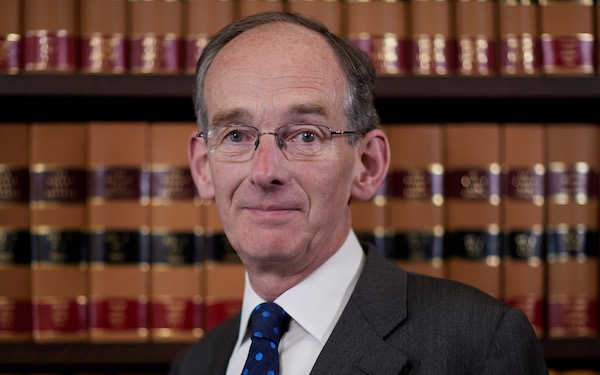 Sir Andrew McFarlane, president of the family division of the High Court

The new family courts president has called on local authorities to increase their focus on the pre-proceedings process in order to ease pressures on the system.

In a speech at the Assocation of Lawyers for Children’s annual conference on Friday, Sir Andrew McFarlane warned sustained strains on the child care system had gone beyond a “crisis” and that professionals were stressed to the point of “collapse”.

McFarlane, who took over from Sir James Munby during the summer, said that addressing the volume of care order applications – up from 11,000 in 2014-15 to more than 14,000 in the last two full financial years – was his priority.

But, he argued, such forces “are well outside the control of social workers, lawyers, judges and courts”. Echoing a recent report by the chief social worker Isabelle Trowler – which his speech quoted from – McFarlane said more consideration needed to be given to families’ pathways into the justice system.

“[Pre-proceedings is an] area which I believe is ripe for attention, with the aim of diverting some cases away from court or, at least, ensuring those cases that come to court are ‘match-fit’ for engagement in the court process at Day One,” he said.

McFarlane said in his speech that he was part-way through a tour of family courts in England and Wales, during which he was talking to local authority social workers and Cafcass guardians as well as legal professionals.

His assessment of the system was very much a “work in progress”, McFarlane emphasised. But he had formed a clear view that social workers and other professionals were often attempting to work at “well beyond capacity”.

The president added that even at this early stage he had learned enough to be concerned that some councils were not carrying out pre-proceedings processes thoroughly or effectively enough.

“The result is likely to be the issuing of care proceedings at a time when the case does not have a sound basis in up-to-date evidence, assessment and professional opinion, or the opportunity to divert a family away from the issue of proceedings has not been adequately provided,” he said.

Too many cases, McFarlane said, were arriving at court “not properly formulated and focused”, thereby requiring legal professionals and Cafcass to spend excessive time “unpacking the issues”. Some children’s cases were coming before judges at a stage when there was “no need to do so”, he added.

McFarlane said that if pre-proceedings practice was to be reviewed, consideration should be given to how Cafcass should be involved “so the voice of the child, and the likely view of Cafcass if proceedings are issued, are heard at that stage”. Raising parents’ legal aid provision should also be looked at, he suggested.

The family courts president also queried whether the 26-week timescale that care proceedings must follow was in some cases having an adverse effect on outcomes for children.

A recent academic study drew attention to the rise in special guardianship and supervision orders in an era of shrinking resources, and questioned whether the 26-week deadline was hampering decision-making in some cases – a theme McFarlane picked up on.

“Where a child is to be rehabilitated home, or placed with relatives or friends with whom he or she has not previously lived, the child’s welfare may justify a further period of oversight by the court, within the ongoing care proceedings,” he said.

McFarlane said he would welcome debate as to whether a provision within the Children Act enabling proceedings to be extended to enable courts to “resolve [them] justly” could be used more widely.

He proposed that if judges were to make cautious use of extensions to proceedings, the relatively small number of resulting cases could be exempted from statistics around the statutory timeframe.

2 Responses to Focus on pre-proceedings to ensure right cases in court, urges McFarlane