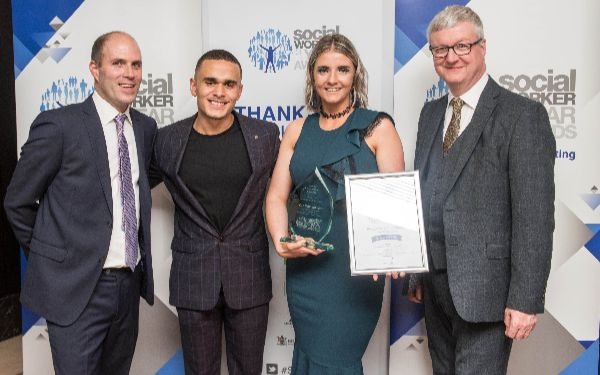 Photo: Zoe Williamson, who was named overall social worker of the year

The winners of the 2018 Social Worker of the Year Awards winners have been revealed following a presentation ceremony on Friday (30 November).

Awards were presented to individuals and teams of social workers across children’s and adults’ services, mental health and the charity sector in 17 categories, with each having a gold award winner for the practitioner or team whom the judges were most impressed by.

Social Work Without Borders, which provides support for asylum seekers and refugees from social worker volunteers, won the gold award in the championing social work values category, having withdrawn from the awards over outsourcing firm Capita’s joint sponsorship of the category. In response to its withdrawal, the organisers announced an ‘ethics audit‘ of the awards, including sponsorship, though Capita later withdraw its sponsorship.

Following Friday’s ceremony, Social Work Without Borders declared that it was “as surprised as anyone” to learn it had won the gold award after withdrawing.

The ceremony was hosted by BBC News reporter and care leaver Ashley John-Baptiste.

The gold award winners were:

3 Responses to Social Worker of the Year Award winners revealed