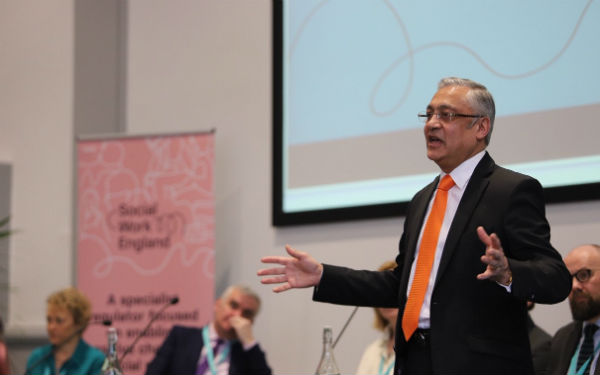 A new fitness-to-practise model being consulted on by Social Work England can offer a template for other regulators, its two senior leaders have said.

Speaking to Community Care ahead of an event to launch its consultation on professional standards and rules, the new regulator’s chair Lord Patel of Bradford and chief executive Colum Conway pledged the proposed new system for fitness-to-practise cases would be faster and more transparent.

Social Work England’s operating framework gives it latitude to deal with different cases in different ways. This will enable it to process more minor alleged transgressions without the need for practitioners to proceed to a full tribunal, and to tweak the system without consulting MPs.

“[This is an opportunity] for social work to lead the charge and say, this is how you should inspect and regulate,” said Lord Patel.

Conway added that the process would be “consultative” right through. “One things people complain about is getting a paper saying, here is a complaint, ‘and that’s the last I hear about it for months while I sit in anxiety’,” he said. “People will be involved at all stages and we’ll keep talking to them and let them know where we are.

The effectiveness of the decision-making process would be kept under review to ensure reasons for different sanctions were “explicit”, Conway said.

He added that the aim of tribunals would be to operate “in an open manner and in an understandable way”.

As well as rules around fitness to practise, Social Work England’s consultation, which closes on 1 May, also covers standards around professional conduct and education and training.

Conway said the draft standards that have been published could be open to considerable revision within legislative and regulatory boundaries.

“There is room for manoeuvre,” he said. “What we are trying to test is: do people feel we are being ambitious enough? Do they get a flavour of what we are trying to do around social work? How we engage with people and the sort of relationship we want to build? If not we are ready to make amendments and adjust.”

He added that some points – for instance around what constitutes “ethical” use of social media by social workers – had been left deliberately vague but that more detailed guidance would be published soon after the consultation closes.

Conway said that Social Work England and the HCPC were working towards a handover date – and had made preparations for a “smooth, safe and efficient” transfer” – but that ministerial sign-off, with Brexit looming, was holding the process up.

‘Our bottom line is to produce the best social workers’

A key point within Social Work England’s draft plans is to make statutory-setting placements mandatory for all trainee social workers.

Some practitioners have questioned the viability of this, given pressures on employers’ capacity, and the fact that universities are now competing with fast-track training providers for councils’ availability.

Lord Patel, who said he had spoken to around 1,700 people involved with social work since taking up his role last year, acknowledged there would be challenges.

“[But] our bottom line is to produce the best social workers – and if the evidence says a statutory placement is key, then we have to push that,” he said.

Conway said that giving time to adjust to the measure was one main reason why the new educational standards are not due to come into force until autumn 2020.

“It’s important we put a marker down that this is what needs to happen,” he said. “We are willing to work with people and are recruiting a significant number of regional engagement leads, who will work on the ground with everyone, including universities and other providers.”

‘Engagement has to be about more than just paying a fee’

On mooted hikes to social work registration fees – which have just been controversially raised 18% by the HCPC – Conway said there would be further detailed conversations but claimed Social Work England’s financial independence was important to practitioners.

“All we can do is be honest and frank about, here’s what it costs, here’s what we are trying to do, here’s why it is valuable, so here is our proposition,” he said.

Making the case would involve persuading practitioners that the new organisation hadn’t just been set up to collect a payment every 12 months, Conway added.

“Engagement with the regulator has to be about more than paying the fee,” he said. “Part of what we have heard back through talking to people is, ‘Show us the value,’ and we will endeavour to do that.”

‘I’m not that bothered about Ofsted. If you want to make a big improvement you’ve got to own it’
Social Worker – Brent

10 Responses to New fitness-to-practise process can be model for other professions, say Social Work England bosses