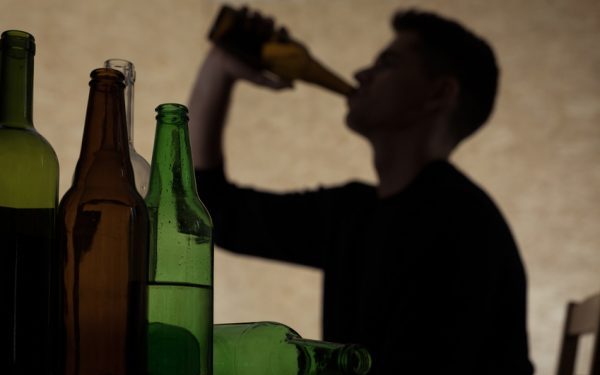 I arrive at 9am – the time we’d agreed last week, and the time I’d written on his whiteboard to remind him of this home visit. I rang the doorbell and waited the usual ten seconds. Any longer and that’s when I wonder if he’s okay, home, or even dead.

Jim’s lived in this city centre studio flat for nearly four years, ever since he left the sober surroundings of a specialist care home on the edges of the city. He now has a home – with walls painted a colour of his choosing – for the first time in fifty-six years.

He looks forward to his daily support sessions and uses them to do things like visit coffee shops, go for lunch, play a few games of pool or to go for a walk, while chatting about everything and nothing. He’s a sociable character and always polite.

This is Jim when he is at his optimal best and sober. Something that, despite confidently overcoming the cycle of addiction many times, is only ever temporary.

Jim’s main living area houses his couch, his bed and his dining table, but it’s the couch that acts as the epicentre. This is the control hub where he navigates his way around the rest of the flat, the place from where everything is measured. Three steps to sit at his table, five to get to his bed, six to the bathroom, and seven to the kitchen.

The front door is right next to the kitchen, so experience has taught me that if he hasn’t answered the door within ten seconds of ringing the bell, something is wrong.

More than ten seconds and he won’t assertively answer the door with a smile on his face, greeting me politely. Instead, it’s likely he will have experienced a relapse.

Between ten and twenty seconds indicates a manageable relapse – the early stages where an indulgence in lager or cider has made him feel jolly, but hungover. He will still be able to walk, but may wobble, and will still be able to converse coherently. But he will be disappointed in himself and ‘annoyed for allowing this to happen again’.

We’ll try to talk over the events that led to the relapse and boredom will likely be the cause. Regularly, Jim also expresses that he ‘simply likes the taste of alcohol’, and to the untrained observer, both of these reasons might sound like unacceptable explanations. But to Jim, in the absence of any other rationale…this is all he has.

Anything over twenty seconds suggests that this isn’t the early stages of a relapse, but casual lager and cider use has escalated and advanced into the use of spirits, probably vodka. When Jim uses vodka, that’s when his diagnosis of alcohol related brain damage (ARBD) is more evident and worsens. He will be physically sick and neglect food, but still consume alcohol. After much effort, he will be able to stand up, but will need to hold onto the walls to keep upright. He’ll forget the words he wants to say, only able to express feeling of remorse, guilt and shame repeatedly.

Going to have a game of pool, or lunch in a cafe or a walk in Jim’s community will be out of the question. I’ll offer practical and emotional support to make sure any harm is reduced and his basic needs are met. I’ll make sure Jim is as safe as possible.

It’s probable Jim won’t have eaten a hot meal that day, but he won’t feel safe enough to manoeuvre around the kitchen using knives, kettles and ovens to prepare anything. So I’ll help him use his tablet to have a meal delivered to his door. I’ll make sure his mobile phone is charged up and switched on so he can call for help if he needs it. I’ll prompt him to take any medication he is due, which is to reduce the cravings of alcohol, to combat mood and control alcohol induced epileptic seizures.

It’s also unlikely Jim will accept all of his allotted support time, preferring to lie down in an attempt to sleep it off. As I prepare to leave, I will observe him experiencing tremors – a sign that his body is faced with withdrawal symptoms. He is aware of my organisation’s policy that he can’t consume alcohol during a support session, and despite his physiological need to do so at times, to his credit he never has done.

Ever the gentleman, Jim tries to walk me to the front door – all seven steps, but I assure him there’s no need, I’ll see myself out and say he should stay in bed to get some rest. Jim’s relapses can last for between a couple of weeks to a couple of months, but they all seem to conclude the same way – by coming to harm after falling and hurting himself, being hospitalised or being violently sick for days on end.

A period of abstinence will then occur, sometimes for up to a month. This is when Jim will answer the door before the count of ten. This is the period we’ll go for long walks and talk about what his future could look like. This is when Jim is at his best.