Do we think enough about love for children in care? 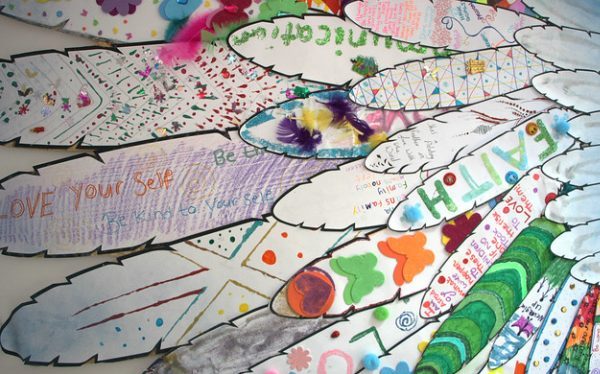 Artwork on display at the conference. Photo: Flickr/LiverpoolHopeUniversity

On the 26th April 2019, the first conference organised by those who had experienced the care system was held at Liverpool Hope University.

The vision of the conference was two-fold. One, to create a space where the care experienced community could have an opportunity to share their views about being in care. The other, to offer an event which was aspirational and celebrated the many care leavers who had achieved success within their life.

Care experienced attendees were given a t-shirt and goodie bag which included positive messages of affirmation. Raffle tickets were provided to each attendee on entry and they all won a gift; authors donated signed books for some of the prizes. There was an artwork installation created by children in care councils.

Workshops designed for both care experienced people and social care professionals took place throughout the day, three of which I facilitated. I led the introductory session for care leavers over the age of 25. The group had between 17-20 care experienced adults, and after some brief introductions, there was a sense of a shared purpose in the room.

One woman who shared her story told the group that two of her children were removed from her care and that after trying everything in her power to get them back, unfortunately they still remained apart. She now sits on a national campaign board called Every Child Leaving Care Matters, which seeks to raise awareness of how isolating being a care leaver can be for many.

Another woman told the group how she had moved foster families so many times and the effect this had on her going into adulthood, feeling she had no one to turn to. She now works with young people in care, managing an independent visitor service to try to ensure that children who move foster families are still able to have a consistent person in their life.

The other two sessions I led were on Love and Relationships and were attended mainly by those who are currently in care. Discussion within the group was encouraged. One young lady spoke of a negative experience she’d had with her social worker: she felt she was never treated with respect. She told us how she had questioned this and posed a good suggestion: if the local authority have all of her information, why was she not able to know basic information about her social worker by way of a profile?

Many other topics were raised throughout the sessions and as a group we listened, discussed, and considered what could be done differently. Many attendees spoke of positive experiences and strong relationships with foster carers and social workers, and of the need to have their own friendships supported.

Towards the end of the day, all attendees came together to share insights from the days’ sessions. A key theme that arose was the seeming lack of priority for mental health support: many felt as though mental health was not joined up enough and that there is a difficult transition between children and adult mental health services.

Another recurring theme was the lack of ‘love’ felt by some children in care, for example the debate about whether foster carers can hug children, and what challenges this can lead to later in life. Some attendees in senior local authority roles pledged to look into the feedback regarding ‘love’ and an MP also agreed to raise the issues from the conference at the forthcoming prime minister’s questions.

My own takings from the conference were around questioning how much hope and aspiration is promoted in children’s social work practice. There are always small ways in which we can build a child’s confidence by sharing success stories of other care experienced adults. I also question more generally if we, as social workers, are really doing enough to support care experienced people from childhood through to adulthood. At times, in social work, I see many short-term decisions being made that might not take into consideration the potential longer-term impact.

As a proud social worker myself, I acknowledge that the conditions for being able to prioritise relationships over paperwork and caseloads is never easy. However, I do believe that if these messages continue to grow at conferences like this, continue to feature in the news and continue to have a powerful voice as spoken by those who are care experienced, then maybe those who run the services will have to take some notice and adjust accordingly.

A full report of the outcomes is going to be published and is available at:  www.careexperiencedconference.com

Social work cartoon: ‘Hot desking’
How a council is helping staff work creatively by giving them freedom from bureaucracy

2 Responses to Do we think enough about love for children in care?