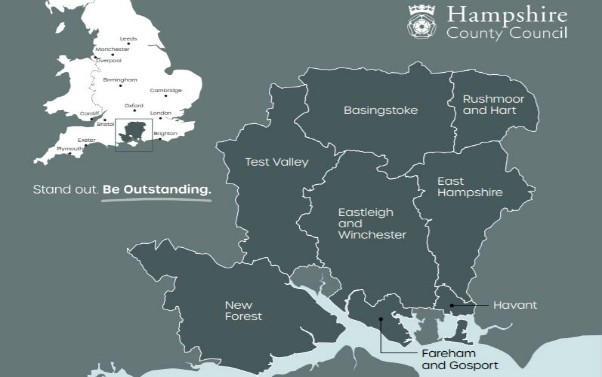 Whether you already live in Hampshire or have plans to relocate, there is a pace of life to suit everyone and wonderful places and spaces to inspire a career in children’s social work..

Hampshire is the third-largest shire county in England and has a population of over 1.3 million.

Set within Hampshire’s backdrop are the cities of Winchester, Southampton and Portsmouth. These, as well as many towns and villages, offer fascinating history and culture with historic buildings, thriving theatres, award-winning museums and state-of-the-art shopping centres.

Enjoy the exhilaration of indoor skydiving in Basingstoke or a tranquil afternoon by the waterfront in Gosport.

Eastleigh sits between Winchester and Southampton and is easily to commute to from London. The town is undergoing a change as it becomes recognised as a hub for contemporary arts. The Point – converted from the old Town Hall and adjacent library – is now a centre for performance, with emphasis on dance, innovative new productions, community clubs, and classes.

Winchester is in heart of the county and is known heritage and historical landmarks. These include the Winchester Cathedral, which plays host to one of the country’s best-loved Christmas markets every year. Beyond the history of the city, the University of Winchester and Winchester School of Arts and more restaurants, bars and cafes are joining the high street.

Children’s social workers in East Hampshire are based in the town of Alton. They serve a rural community that is surrounded by picturesque villages. It is often referred to as Jane Austen country because the home she lived and wrote her classic novels is in nearby Chawton.

Social worker teams in Hart and Rushmoor are multicultural to reflect the district’s diverse community where over 6% of residents have English as their second language. Farnborough and Aldershot offer a range of activities including the Farnborough Airshow and Runway’s End Outdoor Centre.

Basingstoke is an old market town which expanded in the mid-1960s. It includes several picturesque villages within a couple of miles of the town centre and continues to undergo transformation and development. The Festival Place Shopping Centre is among the latest developments, and includes a wide range of shops, cafés and restaurants, a trampoline park, and large multi-screen cinema.

Test Valley incorporates some of Hampshire’s most picturesque and photogenic villages and open spaces. It includes the towns of Andover, Romsey, parts of Southampton such as North Baddesley, and areas of Tidworth. There are several good and outstanding primary schools and secondary schools in the area as well as one special school.

If you are working at the Havant offices, you will be in the heart of a vibrant town where the mayor is often seen leading ceremonies and hosting royal visits. Beyond the office building is a thriving market town, with its Tuesday and Sunday markets. Havant is also host to Staunton County Park, a great day out for all the family.