As the fast-track provider's latest cohort prepare to start their placements, Community Care finds out how it is evolving its teaching and intake

By Alice Blackwell on August 29, 2019 in Children, Workforce 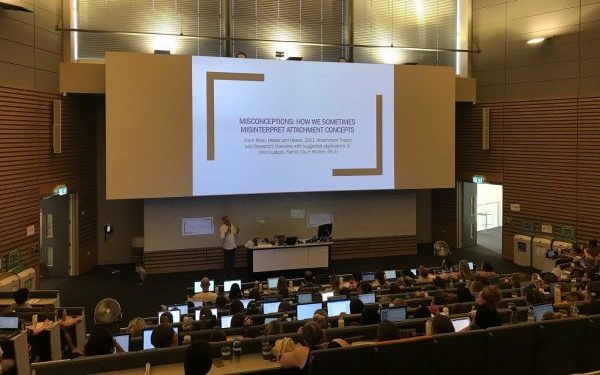 Next week, the latest crop of Frontline students start their year-long training placements in local authorities. Like their five predecessor groups, the 2019 cohort will begin their placements armed with the grounding in social work theory provided by the five-week ‘summer institute’ that kicks off the fast-track social work course.

Last month, on the hottest day of 2019, Community Care visited the institute, based at the University of Warwick, to see how the latest group were acclimatising to the training and how Frontline is evolving.

Already well into the drill of all-day lectures and seminars that comprise the summer institute, the students were quickly into the day’s first task: a true or false quiz testing misconceptions on attachment theory.

The pressure-cooker environment is characteristic of Frontline’s intensive – and sometimes controversial – route into children’s social work. Earlier this year Community Care reported on Frontline scrapping a decision to make its master’s degree compulsory, amid concerns that too much stress was being put on participants, and on complaints that the expanding organisation was not looking after students well enough. Figures published this week under the Freedom of Information Act show the proportion of students who completed the master’s dropped significantly for the 2016 cohort, the latest for which figures are available.

In response the organisation has defended its record, pointing to feedback from participants and to a 2016 Cardiff University study that praised its graduates’ practice skills. But Frontline acknowledged mistakes and said its approach, “like that of effective social workers and children’s services teams, is to learn so we keep improving”.

For Frontline’s new starters, the summer institute presents an immediate test of those learning abilities. In the placements they are about to start in local authority children’s services, they will be supervised in small units by consultant social workers; after a year they should be qualified social workers. After two, they should have a master’s and a completed assessed and supported year in employment (ASYE) under their belts.

On our visit, everyone in the room was focused on the man – Professor David Shemmings – explaining what attachment is, and how to correctly use the term in practice. Shemmings is one of a number of experts who deliver Frontline’s curriculum along with in-house tutors. He has also recently been appointed to advise the provider and identify new ways of retaining knowledge gained in lectures and seminars, and how to bring it through to practice.

One criticism often levelled at Frontline, compared with traditional routes into social work, is that, however intensive, a five-week crash course can’t prepare trainees for placements and practice. The approach, and training model, has been replicated on the Think Ahead programme focused on training social workers for mental health practice.

Shemmings points out that he and his colleague, Dr Alice Loving, also teach on ‘recall days’ in both year one and two. Frontline says there are 22 recall days in year one and five coaching sessions in year two.

Shemmings compares this to the lecture time on traditional academic courses and says that in his opinion the fast-track route likely has more taught hours: “I think if you were to add it all up, it’s more than a mainstream course,” he says. “It’s the issue that it’s condensed and collapsed into a short period of time, people tend to talk about, ‘Oh, it’s five weeks in the summer institute,’ but that’s only part of it.”

Another bone of contention has been Frontline’s fully funded status, which also applies to the Think Ahead and Step Up to Social Work schemes, as bursaries available for undergraduate and masters courses have been frozen or cut. In year one, tuition fees and accommodation for Frontline’s five-week summer institute are paid for and students receive a tax-free bursary of £16,756 to £19,591 dependent on location.

Students we spoke to – sitting in small groups and enjoying some much-needed ice cream during their lunch break – acknowledged that financial benefits represent a key attraction, without which some would not be here.

One student used to work as a minute-taker within adult safeguarding at Wiltshire council. He had been “dancing around social work”, he explains, with other roles in admin support for the Pause project, which works with women who have lost children to care, and as a teacher.

“The main draw [of Frontline] if I’m being honest is that it was all free and all paid for, which was a big thing because I couldn’t afford to take time out of work to study, and I certainly couldn’t afford all the fees [of a traditional academic route],” he says

Frontline has also been criticised in the past for drawing its students disproportionately from more privileged backgrounds. The 2016 evaluation of the scheme found that, compared with mainstream programmes, its participants were more likely to be younger, white, from higher socioeconomic backgrounds and to have attended one of the elite Russell Group universities.

The programme is aiming to increase the diversity of its intake year on year. There has been significant increases in the proportion of students who were eligible for free school meals, rising form 5% in 2017, to 16% last year and 19% this year. There has also been progress, though slower, in the proportions from black Asian and minority ethnic communities, who made up 15% of the 2017 cohort and 18% of the 2018 and 2019 groups.

While there was a sharp increase in the proportions of those who were among the first generation in their family to go to university in 2017-18, from 43% to 56%, this has dropped back to 48% this year. However, the proportion of career changes, as opposed to recent graduates or those fresh from university, has grown, from 40% in 2018 to 46% in 2019.

One of those career changes is Ria, who was working in a youth offending team and says she had been asking her local authority for three years if she could get social work training so she could register with the Health and Care Professions Council and work with different groups. Emily, who worked with disadvantaged adults, and Alison, who was in office work, both nod in agreement when Ria says the summer institute is helping her to get out of her “bubble”.

“To come out and meet people from other authorities, other backgrounds, other experiences and different age groups: it kind of puts you out of your comfort zone but it’s good because it shakes you up,” Ria says. “I think we’ll all take elements of this differently back to our own practice.”

The government has invested in Frontline year-on-year from its first cohort of 100 in 2014, and awarded the provider a £45 million contract in January to train 450 participants each in its 2020 and 2021 cohorts. More students mean more placements, and the programme has expanded its geographical reach from an initial group Greater Manchester and London authorities into the North East, Midlands and other parts of the North West and South East. This year it has also partnered with local authorities in the South West.

However, as we report today, the quota of 452 for 2019 has not quite been filled. The cohort size has grown by 16% from 2018, but the final number of participants is only 393 – 59 short of the target set by Frontline by the Department for Education as part of its contract to deliver the scheme.

A spokesperson for Frontline said the final cohort size is determined by a number of factors, primarily the standard of applications. They said they also require local authority partners to meet exacting standards, to ensure participants receive the necessary support, which determines where and how many participants they can place in each region.

Frontline’s 2017-2018 report (page 8) illustrates the importance of local authority partnerships for the programme as the number of offers made in the 2017–18 season exceeded the number of placements in local authorities available, which meant a small number of participants deferred until 2019.

Tell us what you think
We’d really value your feedback on how Community Care can deliver more of the content you want in a way that works for you.Take our short survey to help us do this, and give yourself a chance to win an Amazon Alexa in the process.

On the academic side, meanwhile, Lancaster University will in 2020 replace the University of Bedfordshire as Frontline’s academic partner to provide accreditation, quality assurance, administration and welfare support. Karen Hewer, Frontline’s principal practice tutor for the North West, and Hannah Thompson, a practice tutor from the Midlands, say they do not envisage the new partnership bringing major changes.

The academic teaching will continue to be managed in-house and Thompson stresses that all Frontline tutors are qualified to teach and have areas of specialism. “If anything, we’re using the knowledge and skills [we have] internally a lot more to develop the curriculum,” she says. “That’s happening regardless of whether we’re with Bedfordshire or Lancaster.”

Both tutors express excitement about Shemmings’ new advisory role, which they say will contribute more research-mindedness.

“It’s bringing in his research perspective but also his ideas about how we share that information in the context of the participants being in the first year of practice, actual qualified practice and the demands of trying to do research at the same time,” says Hewer.

Shemmings, meanwhile, says he will be working alongside the fast-track provider to “make the links between theory, research, values and practice”.

“It’s an action research project so it’s working with processes. It’s not ‘what are the outcomes and how are they met?’, it’s ‘what does this process look and feel like?’

“Even the best lecture only really accounts for about 10% of people’s learning,” he says, citing research by US academics Bruce Joyce and Beverly Showers.

“It’s demonstrations, films and bits of coaching. It’s how do people out there with their consultant social workers use the ideas [from] the formal lecture arena to then take that to the workplace? And I think that’s where the learning takes place.”

Shemmings’ project has just got underway, while for the students the realities of local authority practice are just about to begin.

Social Work England will be setting out its approach to regulation in a session at this year’s Community Care Live, which takes place on 15-16 October in London. This is one of over 30 free sessions providing social workers with critical learning for their practice at their event. You can also reserve a place at one of our eight paid-for legal sessions. Register now to ensure you don’t miss out.