Mental Health Act detention rates are three and a half times higher in the most than the least deprived parts of England, while racial disparities have also widened, new data shows, according to new data

The findings, which show that risk of detention rises steadily with an area’s level of deprivation, has prompted calls from a social work leader to tackle the social causes of mental illness, rather than focusing on individual pathology. 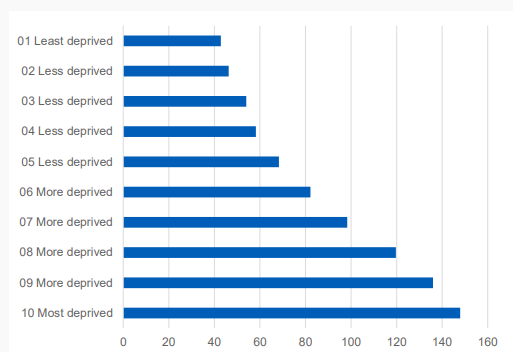 Steve Chamberlain, chair of the AMHP leads network, said the findings were unsurprising but should prompt action to tackle the root causes of mental health crisis.

“There is a remarkably consistent relationship between the two and I believe it should prompt more exploration about the impact of socio-economic factors on people’s mental health, as opposed to focusing on individual pathology,” he said.

The issue needs more than “just tea and sympathy”, Chamberlain said, adding: “Given the considerable cost to the economy of mental illness, surely investing in communities is an economically sound strategy, leaving aside the issue of the trauma that individuals experience who are in mental distress.”

The data showed a slight increase in racial disparities in detention rates and a significant rise in inequalities for use of community treatment orders (CTOs).

Chamberlain said there needed to be a “fundamental change in the proportions” to start addressing racial inequality in mental health.

As with previous years, the accuracy of data was compromised because not all providers submitted data while some submitted incomplete data. Using the subset of providers that submitted good-quality data in each of the last three years, NHS Digital estimated there was a 0.8% increase in detentions from 2018-19 to 2019-20.

Chamberlain said he “continues to be amazed” that NHS Digital is unable to obtain complete data regarding the use of the Mental Health Act.

“Given the enormity of the decisions that are made and the impact on each individual, it seems to me absolutely necessary that each and every provider which has the ability to detain patients or place them under some form of compulsion must keep clear and accurate records and be able to make full returns on an annual basis,” he added.