New ADCS president: this is the year to ‘reset the ambition for children’

Charlotte Ramsden says she will use her platform to urge a long-term plan for children and families as part of pandemic recovery, and that the care review will only succeed with the investment to back it up

By Alice Blackwell on April 27, 2021 in Children, Social work leaders 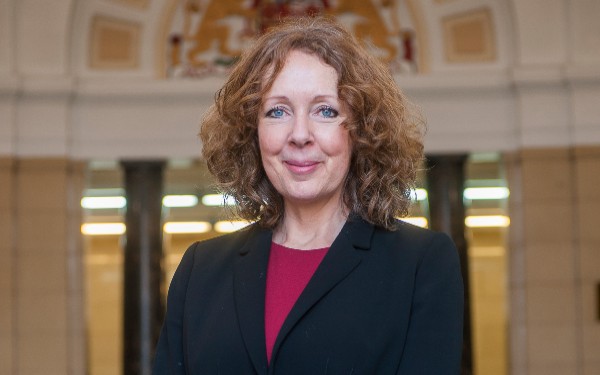 With a feeling of hope at lockdown restrictions lifting, incoming Association of Directors of Children’s Services president Charlotte Ramsden says this year “feels like the year to reset the ambition for children and young people” and that now is a “really exciting time for children”.

Following a year in which children have missed months of school and been separated from friends and loved-ones, and mental health problems have deepened as child poverty and domestic abuse have increased, this strikes a highly optimistic note.

However, Ramsden, who spoke to Community Care last week before she took on the presidence, is clear that being ambitious for children and families requires a long-term plan from government – similar to the 10-year plan for the NHS issued in 2019 – backed by sufficient investment.

At the same time, amid conversations about a lost childhood, Ramsden, director of people at Salford council, says the Covid story that needs to be told is of children’s resilience and strength.

‘Children have been incredibly resilient’

“Lots of children have done incredibly well during this year of Covid, have been incredibly resilient and are bouncing back, but they’ve suffered loss, they’ve suffered missing seeing people, just in the same way that we all have. So, it’s about trying to keep that message balanced so that there is that real sense of hope for the future.

“We don’t want children to be over-anxious about all that’s happened in the past year, we want to support them where they’re at as part of that long term plan to building back better.”

In her inaugural presidential speech last week, Ramsden said it would need to focus on “enabling all children to achieve their potential, whilst retaining a focus on the poorest and the most vulnerable”.

She also said it would require a long-term approach to government funding for children’s services, ending the short-termist approach that ADCS has criticised previously for stifling councils’ ability to plan for the future

‘Stop the waste of time and money’

“Please stop the waste of time and money that results from dangling disparate, small, time -limited pots of funding to tackle complex, multi-dimensional and entrenched social and cultural problems,” Ramsden said in her address. “Short-term investment is not a sound basis for resourcing sustainable joined-up services.”

However, she also made clear that “building back better” for children, particularly the most vulnerable, would involve increasing the quantum of investment in services, not just the timeframes over which it is provided.

With ministers due to deliver a long-awaited comprehensive spending review later this year – setting out government funding plans for the next three years – Ramsden said ADCS’s view was that children’s services needed an additional £12.5bn over this period. Councils were due to have spent £9.8bn on children’s social care in 2020-21, according to government figures.

Ramsden said the additional money was required “to stabilise, sustain and adapt services to meet the needs of the growing number of children and families who need our support to thrive, not just survive in the wake of the pandemic”.

She added: “That’s a lot of money but it would be worth every penny to create a country that works for all children.”

Feeding into the spending review will be the initial findings of the government-commissioned review of children’s social care, led by Josh MacAlister, and due to report next year.

The government faced substantial criticism last month, when it revealed that its contract with MacAlister set out that the care review could not assume any additional funding to implement its recommendations. Any additional resource would need to be paid for by savings elsewhere in government over time.

Ramsden tells Community Care that the status quo in resource terms is not an option: “Whatever comes out of the review, we would want to make sure that it was properly invested in in order to deliver. There’s no point in making recommendations without then also making sure that we have a sustainable approach to resources.”

She says she hopes the review will help to identify “the right shape of services”, making sure the best prevention methods are used and that the best support and care for children is available when necessary.

In terms of specifics, she says there are “very big concerns about the residential care market at the moment”, both in terms of its ability to meet need and cost. She says there needs to be a better understanding of what is and isn’t working in this sector and how to reshape it to better meet needs. This is also the subject of a review by the Competition and Markets Authority, which is examining the sufficiency and price of placements in children’s homes, fostering and unregulated accommodation. This will feed into the care review.

She is also concerned about vulnerable teenagers: “There’s been lots of discussion around the increase in serious youth violence, of the continuing concerns around complex safeguarding and exploitation, concerns around children’s mental health, so we really want to build on that and say how can we collectively prioritise the needs of our vulnerable teenagers and meet their needs – what does that look like, what have we learnt that works well?”

Ramsden says ADCS are “very keen to be able to influence [the care review] and showcase good practice about what works well, but also be open to learning about things that could be done differently.”

She is in a prime place to influence the review as part of the recently-created ‘design group’ it has set up to help those involved in children’s services feed into its work.

Ramsden is a social worker by background and remains a registered practitioner.

“I came into social work really because there was something about families in poverty and families who were vulnerable and I just wanted to do something, so I’ve always been incredibly passionate about enabling families to support themselves and to be able to make a difference and to see that difference for children,” she adds.

Her career has been entirely based in the North West, starting out as a social worker in Salford, before taking roles in a number of other Greater Manchester before moving back to Salford as director of children’s and families services (DCS) in 2014. Less than a year later, she added adults’ services to her brief as director of people.

Of Salford, she says: “It’s a really proud vibrant city with lots going for it but at the same time, a lot of need.”

OBE for services to children

Alongside her director role, she also got involved in work supporting the development of services for children and young people across Greater Manchester, which saw her receive an OBE last year.

She says she hopes that the work she’s done in Greater Manchester, which was centred around influencing and brokering for the good of children “will be helpful to me in the ADCS presidency because that’s about influencing and supporting a much larger national system”. Ramsden is now stepping back from the Greater Manchester work to enable her to focus on the presidency and her role as at Salford.

Like all directors, Ramsden has had to manage the substantial and repeated changes, in services, interactions with families and for the workforce, necessitated by the pandemic, include widespread remote working.

As the country comes out of lockdown, Ramsden says she envisages “a new normal” involving a blend of face-to-face and virtual practice.

She says unexpected bonuses of the past year has been high attendance at virtual meetings, reduced travel time and costs and the ability to have quick meetings.

“So you can have a half hour conversation on something with people from wherever. That massively helps working  on a national basis because you can connect around the country, bring people together to discuss things quickly, so that the opportunities for much wider for professional engagement have really grown out of this and we’ve certainly seen the benefits of that in ADCS.”

One Response to New ADCS president: this is the year to ‘reset the ambition for children’