‘It’s right to focus on race, but we must look at equality in social work in the round’

Social Work England's new head of equality, diversity and inclusion, Ahmina Akhtar, sets out her priorities for tackling inequalities within her organisation and in the profession as a whole

Earlier that day, Akhtar had tweeted her solidarity with Floyd’s loved-ones as she reflected on the progress that had been made on race since his death and how far there was to go.

Can’t believe it’s been a year since the murder of #GeorgeFloyd. Thinking about his family and all that loved him. Reflecting on the pain, the progress, and the work we still have to do. We must never give up!

Her comments – and her new role – have their roots in a childhood in Lancashire that was characterised by racist abuse and racial segregation between white and Asian communities. 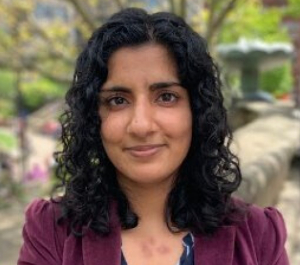 “It’s always been an interest for me,” she says. “I grew up in a town that was very segregated in Lancashire and experienced racism from an early age.”

Her experiences left her feeling a sense of difference and anger, but from her teenage years she channelled this into mentoring and representing other young people, before considering a career in social work.

Qualifying in 2008, her social work career, she says, has been focused on working with marginalised communities, whether people with visible differences or disfigurements, for the charity Changing Faces, or victims or survivors of child sexual abuse through the Independent Inquiry into Child Sexual Abuse’s truth project.

“I worked around supporting and amplifying the voices of those who weren’t always able to share, those who are deaf, those from black and ethnic minority communities, people who didn’t have a fixed abode.”

On joining Social Work England in 2019 as the regional engagement lead for Yorkshire and the Humber, her role in engaging with that region’s social work community extended to focusing on EDI within and outside the organisation, natural preparation for her current role, which she took up on 4 May.

Social Work England’s 18 months as the profession’s regulator have coincided, not just with Covid-19, but with an increasing focus on social inequalities and injustice that was turbo-charged by Floyd’s murder and has brought social work’s own record under the microscope.

As part of the social work establishment, albeit a new part, the regulator’s record, and its leaders public pronouncements, have been subject to scrutiny. In an article for Community Care in April, Wayne Reid, professional officer at British Association of Social Workers (BASW) and the association’s anti-racism visionary, explicitly criticised Social Work England’s record on a number of grounds:

Akhtar engages with all aspects of Reid’s critique but is keen to stress that progress will not be immediate.

On fitness to practise, the organisation is looking to manage the twin challenges of Covid-19, which has made evidence gathering harder and in-person hearings impossible, and higher-than-anticipated referrals, leading to delays described as “life-changing” for practitioners by the Social Workers Union’s general secretary, John McGowan.

“Fitness to practise processes have not been where we’ve liked them to be,” she says. “Alongside that we are going to be looking at EDI issues and exploring the impact of those. It will take some time to get that data.”

This is, in part, because protected characteristics are not included in the data Social Work England is required to collect from practitioners through registration.

“We are working on developing our data monitoring survey, which we’re asking social workers to complete and they will be able to share some information about their own diversity data. That’s not mandatory. We’ll be able to use that to have a better understanding of the impact of our policies.”

Focus on substance, not just language

On the social work standards, she says: “We carried out a consultation with the sector and published a huge document on how we responded to that. In past 18 months, there’s been a focus on language. I appreciate anti-oppressive practice, anti-discriminatory practice and anti-racist practice are not explicitly mentioned but the standards encourage us to take forward challenges of discrimination. Amendments to the standards would require significant change.”

Instead of the standards themselves, she is focusing on the guidance underpinning them.

“The standards are the only the umbrella statement. Because of the feedback I will be reviewing the guidance and will be looking at whether that language can be strengthened.”

As well as reviewing the functions of the steering group, Akhtar says: “I’m looking to establish champions within every team within the organisation so we know EDI is being embedded in all the work we do and we are building internal confidence. Different people have a different understanding of EDI – it’s so broad so we need to make sure we’re bringing everyone with us and making sure it’s seen as core business.”

In relation to benchmarking, Social Work England is part of the Employers Network for Equality and Inclusion and using its talent, inclusion and diversity evaluation (TIDE) to benchmark itself on its workforce, employment practices, strategies, communications and procurement.

“It allows us to really value and monitor our workforce and progress to date,” Akhtar says. “It’s providing some really good insights and I’ll be using that to develop the strategies and action plans going forward underpinned by our statement of intent on EDI.”

While acknowledging and welcoming the focus on race post-Floyd, she is also keen to stress that equality, diversity and inclusion goes well beyond, encompassing the other eight protected characteristics under the Equality Act 2010 (age, disability, gender reassignment, marriage and civil partnership, pregnancy and maternity religion and belief sex, sexual orientation) and the intersectionalities between them.

“More generally we need a real balance between single issues. I recognise racism has a lot of attention – it’s the anniversary of George Floyd’s murder. What I am concerned about we’re not looking at issues intersectionally. In my role as head of EDI I want to be thinking about everything.”

For example, she says there has been rightful focus on the disproportionate representation of black and ethnic minority social workers in fitness to practise, “we don’t mention men as frequently but they are also disproportionately represented”.

Likewise, in relation to representation within Social Work England itself, she says: “Not all diversity is visible. I’m conscious that, in terms of ethnic minority colleagues people are concerned that there’s not enough diversity within the organisation. But diversity is much broader than ethnicity.”

Looking forward, she is optimistic about the impact of her role and the EDI infrastructure that surrounds it, but stresses that “there’s a balance between patience and pace and I want to get that right”.

“I’ve been given a lot of support from the board and executive leadership,” she adds. “Everyone has said that EDI is high up on our agenda. Everybody who is going to be a champion, all of their managers have said they can dedicate a certain amount of time to this work. We can ensure those individuals are able to look at everything through an EDI lens and really allow it to be embedded.”

But she says: “One of the things we’re conscious of is that we’re a new organisation and it will take a while for EDI to be embedded.”

49 Responses to ‘It’s right to focus on race, but we must look at equality in social work in the round’