What is happening to people in inpatient care, 10 years on from Winterbourne View?

Statistics show many people with learning disabilities and autistic people are still in hospitals, despite repeated government targets to tackle this, but several unanswered questions remain, says Chris Hatton

It is 10 years since an undercover Panorama programme reported on the horrendous abuse of people with learning disabilities and autistic people by staff members at an independent sector ‘specialist’ inpatient unit, Winterbourne View. The programme triggered a series of investigations, government reports and policies, and attempts to tweak the system with the aim of drastically reducing the number of people in inpatient services (continuing a history that started much earlier than the Panorama programme).

What can publicly available statistics tell us about what’s happening to these inpatient services and the people within them, and what don’t they tell us that we need to know?

How many people are in inpatient services?

Monthly snapshots of how many people are in inpatient units are available from two sources, published by NHS Digital.

The first is the assuring transformation (AT) dataset – collected retrospectively by health service commissioners in England on ‘specialist’ inpatient services for autistic people and people with learning disabilities. The second uses the mental health services data set (MHSDS) to record information from service providers flagging people with learning disabilities and autistic people in any mental health inpatient service.

There are some big differences between these datasets. The MHSDS includes people in mainstream mental health inpatient services, often for short durations, which the AT dataset tends to ignore. The AT dataset reports more detailed information on service processes (reviews, transfer plans etc), while only the MHSDS reports information on restrictive interventions (restraint, seclusion and segregation). 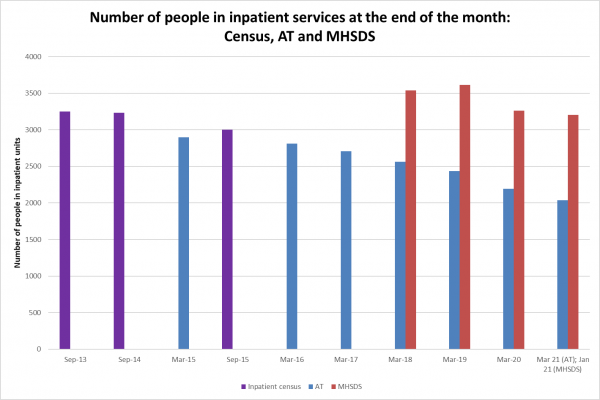 According to the AT dataset (blue columns), the number of people in inpatient units has been gradually reducing over time, although not nearly quickly enough to meet successively redrawn government targets. The MHSDS dataset (red columns) also show a reduction over time, although the number of people reported is much higher than in AT (typically an extra 1,000 people).

Even these gradual reductions might overstate ‘progress’. First, AT numbers are retrospectively reported by commissioners, with around 100 people typically being added after the figures are first reported. So, when looking at the latest month’s AT numbers, add 100. Second, we are still living through Covid-19. During the first lockdown, the number of people going into inpatient services dropped sharply and there are still ongoing restrictions – is this drop permanent or will the number of people in inpatient services creep back up?

How many people are leaving and entering hospitals?

The government has emphasised the number of people ‘discharged’ from inpatient units. Information from AT, which I’ve put together from the monthly statistics, shows that in the five years from October 2015 to September 2020 there have been 10,830 ‘discharges’, with numbers increasing from 2015-16 to 2017-18 but decreasing since.

Second, because in both datasets, the deaths of people in inpatient services are recorded as a type of ‘other discharge’. How many people have died in inpatient units? We don’t know. Because of standard NHS Digital rounding rules, all the data in the AT and MHSDS datasets are rounded to the nearest five, or suppressed if the number is less than five. With the exception of April 2020 (the first peak of the Covid-19 pandemic), where AT recorded 5 deaths and MHSDS 10 deaths, no individual month in either dataset has recorded any figures on the number of people who have died. If any month with suppressed data can represent 0-4 deaths, then over the course of a year this could be anything from 0-48 people’s deaths not represented publicly.

Plans for getting people out of inpatient services

The AT dataset has a lot of information on care plans, reviews and transfer plans – what does it tell us?

Less than half of transfer plans were agreed with important people and organisations, like the person themselves (41%), the person’s family/carer (36%), the local community support team (44%) or commissioners (47%).

Lessons for social workers, 10 years on from Winterbourne

How can social workers uphold the human rights of people with learning disabilities and autistic people, 10 years on from Winterbourne? Social work managers Claire Webster and Jack Skinner share their tips.

A wide range of restrictive interventions are reported (and these numbers don’t include most independent sector inpatient services), including:

What do we need to know?

The statistics that are made public give us quite a detailed picture of policies that are falling far short of their ambitions. But there is so much these statistics don’t tell us that we really need to know:

Where will we be in another 10 years?

2 Responses to What is happening to people in inpatient care, 10 years on from Winterbourne View?