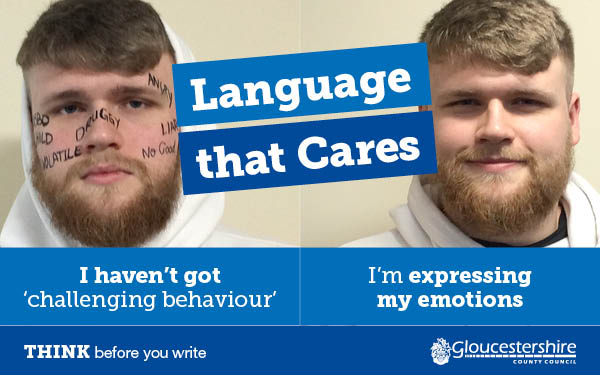 A poster from Gloucestershire's participation team's language that cares campaign

“It’s one thing saying you’ve captured the voice of the child but how do you do it?” So asks Rob Tyrrell, principal social worker for children and families at Gloucestershire County Council.

He adds: “How do you, as a stranger, with a lot of authority, engage with, connect with or build a relationship with that young person?”

Like authorities across the country, Gloucestershire seeks to answer Rob’s questions by asking the experts: children and young people with lived experience of services.

However, the authority, which received an improved rating from Ofsted last week (see box below), is doing it in a way believed to be unique.

And the approach, which has been in place since 2014 but evolved significantly since, is bearing fruit, particularly in how social workers carry out direct work with children and young people.

Says Rob: “Having contacts with young people with experience of social work involvement is massively important and has been a real privilege. It brings home that these are real people, real children and real families that we are working with rather than one part of a process with a beginning, middle and end.”

He adds: “The ambassadors have a huge amount of insight into how we perceive young people and how they perceive us. Social workers like being involved with the ambassadors and feel validated by the contacts they have with them.

‘A temperature check when you are bogged down’

“It’s a bit of a temperature check for when you are bogged down with process, to think what that’s like for the child or family who are receiving services from us, made harder when that service is not altogether voluntary. It’s a privilege to have that.”

Following an inspection in February, Ofsted rated Gloucestershire as ‘requires improvement to be good’. Inspectors found:

They spend much of their time meeting with children and young people to get their feedback, which they then relay to practitioners and managers, through producing resources and running training workshops.

They also meet regularly with a network of participation champions – 50 professionals, including social workers, who seek to embed the learning and resources the ambassadors produce into their teams.

The ambassadors are all aged 16-25 and come with a wide range of experience, covering the full range of children’s services.

One of them is Henry Wells, whose parents have been foster carers for many years. Growing up, he felt there was a lack of recognition for the children of foster carers.

“We’re the fostering family, not just the foster carers,” he says. “You all play a really big role. Younger [foster] children would usually come to me first rather than my parents, to play football.”

In his role as an ambassador, he is able to champion these unsung heroes.

“It’s a big role to fulfil,” Henry adds. “The main thing I do is tell them they are doing a great job.”

Along with his fellow ambassadors, Henry is in touch with children and young people receiving services through a variety of forums, designed to give them voice. The messages from these are then fed into practice.

A flagship project the team have worked on is ‘language that cares’, a national campaign initiated by fostering charity TACT to humanise the words social workers and others use to talk about, and write about, the children they are supporting.

For this, the team developed materials, held workshops with practitioners and ran a campaign urging them to “think before you write”, to avoid children later finding themselves being described in “cold, negative and impersonal” terms in their files.

Henry says the project’s impact has been “massive”.

“It’s about changing the language to make it less blaming and more understandable for children,” he says. “They don’t want to feel confused – they want to know their social worker is on their side. The language has definitely changed. One change has been from ‘contact’ to ‘family time’. I’ve heard the children who live with us use ‘family time’. It’s much more positive.”

‘It’s made us think’

Participation champion Grian Councer, a social worker in one of the county’s safeguarding teams, says: “It’s been really helpful in making us sit back and reflect on who we are doing the work for and what’s important within that. It’s made us think about the language we use. We all agree it’s important to use more child-friendly language but sometimes you get so bought into the bureaucracy that you need to take a step back.”

Achieving and embedding this change has involved the constructive challenge that the ambassadors specialise in.

Says Henry: “There have been a few times when words have slipped through the net, like ‘case’ instead of ‘child’ or ‘young person’. That’s been a word in social work for a long time. It’s not like people mean to say it, it’s just a habit. We’re keeping a close eye. We’re looking at audits, we’re checking policies and procedures, we’re checking language used in meetings.”

Rob adds: “They can be quite vocal when they get tokenistic responses to things. Language that cares is an example of that. Everyone signed up to it – how could you disagree? But what the ambassadors want to know is ‘what are you doing with it, what does it feel like for you as a practitioner to make that conscious effort to think about what you write?’.”

The ambassadors are not standing still and are currently refreshing their language that cares materials.

Another aspect of the ambassadors’ work is mentoring senior leaders, which eight of them do currently, meeting every six weeks with their mentee.

Participation manager Della says: “It’s an opportunity for the ambassadors to speak directly to the directors about what they are doing. So, if there are messages coming from the forums, ambassadors have a direct line to them.”

Rob is clear that the ambassadors’ and participation team’s work is bearing fruit in improved direct work.

“In good or outstanding audits of practice, there will be an immediate focus that you can feel about that social worker’s attention to that young person and what skills they might use to encourage them to tell their story.”

Rob adds: “Social workers are looking more deeply into words like direct work and asking ‘what do I bring of myself into this relationship, how am I going to connect with this particular child with all of the stuff I know or assume about them?’. That’s the sort of thing the ambassadors have encouraged by asking us to think about what it’s like to be that child.”

He and Della highlight the value of champions like Grian in relaying messages from the participation team to their teams and thereby embedding relational approaches to practice.

“They are pointing everyone to resources for direct work and trying to create examples of where things work,” he says. “It creates benchmarks of expectation of how we should be working with children and young people.”

Says Della: “We’ve got some really good examples of teams who are embedding different things because they’ve heard it from the champions. It works best when the team manager is behind it and gives it the space and the time.”

‘A language and culture around participation’

But both are clear that embedding the voice of the child is always a work in progress, with no room for complacency.

“We are quite good at  gaining the voice of the child at service and strategic level, but there’s more to do at that individual level,” says Della.

She and the participation team are now looking at different ways they can engage frontline workers.

Rob adds: “What we are doing is creating a language and culture around participation, which is a challenge when you have backlogs of work. But we know that, longer-term, sustaining that relationship with families is going to be far more productive than completing processes by rote.”

Are you interested in opportunities at Gloucestershire County Council? Check out the latest vacancies here.