Manageable caseloads, admin support and promotion opportunities: why we left our ‘good’ councils for this one 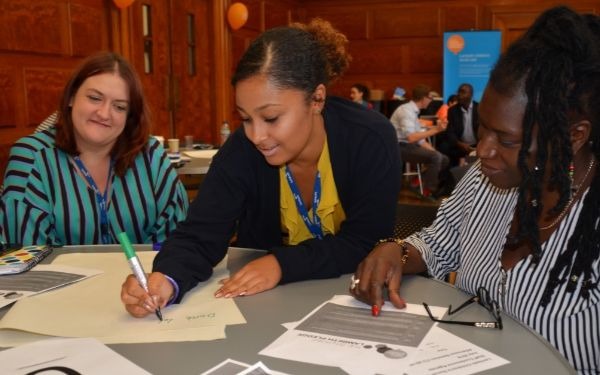 A sponsored feature from Lambeth council

See how you can take the next step in your social work career and become a part of the innovative practice supporting children in Lambeth.

Why would a social worker leave a ‘good’-rated authority for one in the process of moving out of being ‘inadequate’?

At the time the London borough was still rated ‘inadequate’ but Adam had no doubts about his decision.

“I was attracted to the Lambeth model of social work, so I came to the interview to see what the atmosphere was like and I was completely blown away.”

The model that persuaded Adam to make the leap is unique to Lambeth. It’s called ‘Children at the Heart of Practice’ and builds on Signs of Safety and relationships-based approaches. The model embeds systemic practice throughout Lambeth through extensive training for its social workers.

And the positive impact of the model is undeniable. The council’s new leadership team implemented the model in 2016 and it played a crucial role in Lambeth leaving behind its ‘inadequate’ rating at its most recent Ofsted inspection in May this year.

Adam wasn’t the only social worker who left a ‘good’-rated council to join Lambeth in its transitional period. Simone Martin also made that choice and for her the appeal was the chance to be part of a service that would support her to progress.

“Where I was before I was there for a long time and I was ready to be promoted to a higher position,” she says. After joining as a more senior social worker, she has since moved into an advanced practitioner role and later this year will take on a consultant social worker role.

This kind of rapid career advancement is made possible by the council’s commitment to finding development opportunities for social workers on the cusp of, or not quite ready for, management roles.

One way Lambeth does this is through its new ASYE assessor role. This arms-length role gives frontline social workers the chance to supervise and review the professional goals of newly qualified social workers. The social workers who take on the role are rewarded with extra pay and their first taste of management experience.

Being attracted to Lambeth’s model, and staying in the service, is not unique to Adam and Simone. From a position of high agency rates, the council has recruited successfully and now has a turnover rate lower than the national average.

Naeema Sarkar, assistant director, Quality Assurance in Lambeth, puts this success down to the council focusing on the quality of relationship based practice using systemic approaches.

Like Adam and Simone, Naeema joined Lambeth after its 2015 ‘inadequate’ inspection. What impressed her was the council’s desire to improve practice and not become solely focused on performance indicators in response to its ‘inadequate’ rating.

Naeema adds: “We are not saying we have jettisoned all performance indicators. We think they are helpful because they flag up areas where we need to do a bit of work to understand the story behind what the numbers appear to be telling us. They are just one tool amongst many others to help us know what we are doing well and what we need to improve. We value conversations. Feedback from children and young people, partners and social workers themselves is key to doing better. Key performance indicators are not about naming and shaming social workers.”

The commitment to improvement is not just done through the working culture, it is supported by bespoke training. A third cohort of 30 social workers is currently undertaking the protected 14-day systemic practice training. At the end of this training, which is spread over seven months, social workers walk away with a post-graduate foundation degree.

“The big shift has been giving practitioners time and skills to believe they can intervene and do the direct work with children and their families to make a difference as opposed to being a referral agency that signposts families to other service’.’

Adam adds: “Lambeth is very innovative, we invest in this systemic approach. We unpick how we’re questioning everything and our work is not just an assessment, it’s an assessment and intervention together. You can actually do all your work in the 45-day assessment by making it more holistic and working with the family.”

Key to making the model work is giving social workers the time and space to practice. This is ensured by a commitment to manageable caseloads – Adam says his has “never gone above” the preferred caseload in the council – and with business support staff at a ratio of one per every six social workers on a team.

“They do minutes for meetings, they upload things, deal with the admin and financial side of things, this means you have time to go out and work with families,” Adam says.

The different elements developed by Lambeth since the shock Ofsted report three years ago – the training, the model, the support for social workers – have combined to make a previously struggling council become confident about where it is now and the future.

“The commitment from my employer makes me give that commitment back,” Adam adds.

See how you can take the next step in your social work career and become a part of the innovative practice supporting children in Lambeth.