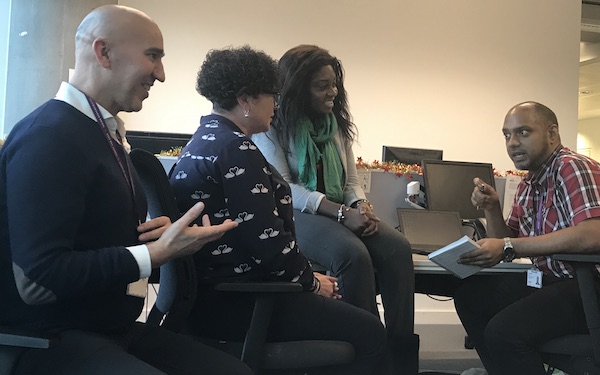 A sponsored feature from the London Borough of Croydon

Croydon Council is seeking children’s social workers who want the time and space to deliver the high quality work that can help some of the country’s most vulnerable families. Check the latest opportunities to join Croydon today.

In the past eight months the caseloads being carried by children’s social workers in Croydon have come right down. The average caseload in the London borough is now at 16, below the target the borough set for itself in all service areas.

This is the story of how Croydon did it and by doing so freed its social workers to deliver the high quality work with children and families they went into the profession to do.

Listening to the social workers

It’s April 2018 and Croydon’s regular staff reference group meeting is underway. In the room, frontline social workers are letting the senior leaders and councillors on the borough’s Improvement Board know how they feel about their caseloads. And they are pulling no punches.

“This many cases are unmanageable – we’re drowning,” one declares. Another chips in: “The volume of work is stopping me from having the time I need to build the strong relationships with children and families that will make a difference to their lives.”

Kerry Crichlow, the director of children’s improvement at Croydon, remembers the meeting as open, honest and – above all – bruising. “It wasn’t a good place to be,” she recalls. “The staff in the room felt we were not listening and never going to get to grips with the problem.”

“Our staff knew the reality and we needed to listen to them,” says Kerry. “After the meeting we decided to bring in managed teams of social workers to get caseloads down and give our staff the time and space to complete the high quality work we know they want to do in Croydon.

“We also did a deep dive to make sure our caseload reporting is accurate and enables managers to support staff with a real-time view of the caseloads.”

Croydon’s plan was to use the managed teams of social workers to support its staff by taking rotations on the duty desk over the summer, taking on the new cases and allowing staff to get on top of their caseloads.

“You can have all kinds of wonderful plans but if your social workers don’t have the time and space to do a good job your plans are not going to gain traction,” says Kerry.

“The market leaders were there but we chose a smaller provider who we felt understood what we were trying to do,” says Kerry.

“We didn’t want an off-the-shelf model based around remote working. We wanted good quality social workers on site and accountable to our service managers and heads of service.”

In June 2018 the managed teams moved in, bringing an additional 18 social workers and two team managers to support with the increasing demand on Croydon’s assessment and care planning services.

Within weeks the difference was clear and caseloads began to fall.

Croydon also focused on ensuring managers were providing good support and supervision to their staff.

Consultant practitioners added practical value through regular group supervisions that looked in depth at aspects of casework in a supportive, learning environment.

By November the action on caseloads had paid off. The average caseload per social worker dropped to an average of 16, a level that gives Croydon one of the lowest caseload averages in London.

A service with a buzz

Barbara Baah joined Croydon’s care planning service in October on her assessed and supported year as a social worker.

“I knew students at uni who were on placement here in early 2018 and complained about the number of cases they were expected to take, even with the reduction,” she says.

“Croydon has really listened to the feedback, and I’ve been impressed by my two-week induction period alongside the support from my team and my manager.

“My caseload is protected, and my manager and I look at the complexity as well as the number, so I feel I can learn my craft effectively here in Croydon.

“I know about progression routes already, which is great as I really want to be a part of Croydon’s future.”

“The service is in a much better place now,” she says. “Caseloads are manageable and morale is really, really high in the teams. I can feel a buzz about the service that wasn’t there at all six months ago.

“Our social workers now talk about Croydon as a place where you’re supported by skilful managers to do the best job you can to make a positive impact on children and young people, and word of mouth is drawing in staff to come and be part of our team.”

The extra time social workers can now spend working with the families is an important change says Rob Henderson, the new executive director for children, families and education who joined Croydon in November.

“Ensuring our social workers have the time they need to do great social work is critical,” says Rob, who came to Croydon from Achieving for Children where he led good-rated services of Richmond and Kingston. “Croydon has its challenges and complexities, but it’s a place where you can really make a difference and that’s what every social worker goes into this job to do.

“It’s got a highly diverse community, there are high levels of domestic violence, and there are real issues around risky behaviour among young people and serious youth crime issues. You can really grapple with social exclusion and with vulnerabilities.

“If you are motivated by improving the lives of others, Croydon’s an incredibly rewarding place to work. Alongside this there is a real emphasis on quality reflective supervision, relational and reflective practice and innovation.”

Five more reasons to live and work in Croydon

“Croydon’s a place where you can really grapple with social exclusion and with vulnerabilities.

“For a social worker, Croydon’s an incredibly exciting place to work. Alongside this there is a real emphasis on quality reflective supervision, relational and reflective practice and innovation.”

Having brought average caseloads down to a reasonable level, the service now focused on ensuring that things stay that way.

To help do this the council is collaborating with the British Association of Social Workers (BASW) on its a push to maximise the amount of time social workers spend doing direct work with families.

“The partnership with BASW is about ensuring our social workers have the right amount of time to do a good job for children and families, and for themselves as professionals,” says Rob.

“The partnership is also about being open and transparent. By doing it we are putting ourselves on the line about our commitment to maintaining manageable caseloads, particularly for those at the sharp end of the business – the single point of contact, assessment, care planning.”

“There’s a real commitment here. Caseloads are now at a rational level but the investment the council’s putting in has actually increased because we want this to be sustained,” he says.

“As an organisation there’s very much a focus on developing strong, trusting relationships with children, young people and parents, and creating a workplace where social workers can do high quality work and get satisfaction from seeing the positive impact they are having on children’s lives.”

Croydon Council is seeking children’s social workers who want the time and space to deliver the high quality work that can help some of the country’s most vulnerable families. Check the latest opportunities to join Croydon today.

Read more from the London Borough of Croydon

– ‘Improving is about having the right social workers in place’
– Can you see the real me?