Timescales for care and supervision cases have averaged 33 weeks since start of 2019, as government allocates more days for applications to be heard to tackle issue

By Mithran Samuel on December 19, 2019 in Children

The length of care proceedings has lagged seven weeks behind the 26-week target since the start of 2019 on the back of year-on-year declines in the family justice system’s ability to deliver on the objective.

The average time from a care or supervision application to the first disposal – when an order is made – was 33 weeks from July to September 2019, quarterly Ministry of Justice figures showed, the same as in the first and second quarters of the year.

This figure has risen consistently since 2016 when it was 27 weeks, hitting 30 weeks last year. The 2016 number marked a successful decline from a high of 55 weeks in 2011, and followed the introduction in legislation on the 26-week target in 2014 (see below). 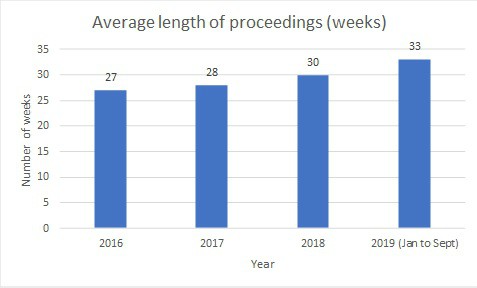 Just 42% of cases in the latest quarter were completed within the 26-week limit – a similar proportion to the first two quarters – which marks a significant fall from the high of 61% in 2016. Last year the figure was 49%.

The latest rise in the length of care proceedings does not appear to be driven by demand, as the number of children involved in public law applications, most of which are care cases, fell by 1% on the same quarter in 2018, following equivalent falls of 8% and 5% in the first and second quarters respectively.

Responding to the figures,  Sara Tough, chair of the Association of Directors of Children’s Services’ families, communities and young people policy committee, said there were several reasons for the increase in average duration of cases.

These included that “the number and complexity of cases we are dealing with has increased and sometimes assessments must be completed for family members who have emerged during court proceedings”.

She added: “There is also a national shortage of judges which has an impact on timescales. That said, it’s important to note that we are performing better for children and families than we were eight years ago. Timeliness is important but it should never be put above securing the very best outcomes for each child and young person, even if this does fall outside of the 26-week time limit.”

The Children and Families Act 2014 amended section 32 of the Children Act 1989 to state that a court hearing a care or supervision order must draw up a timetable for its disposal within 26 weeks of the application being issued.

The court may extend the timetable but only if it considers this necessary to resolve the proceedings justly, and in deciding whether to do so, they must the impact on the welfare of the child, and on the duration and conduct of proceedings.

Extensions are of up to eight weeks and there is no legal limit on the number of extensions that may be granted. However, the legislation states that extensions should not be routine and require specific justification.