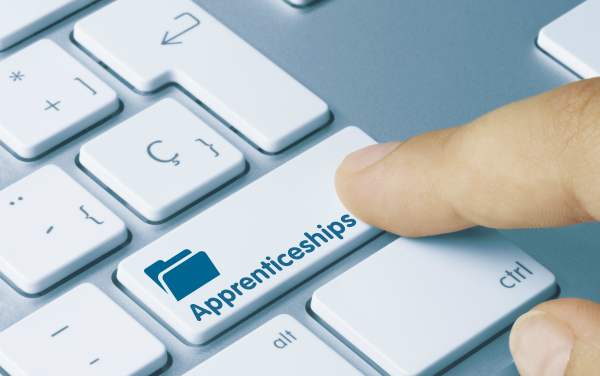 Mental health social work training provider Think Ahead has removed references to apprenticeships from adverts displayed on Google search pages after being contacted by Community Care.

The organisation, which delivers a fast-track postgraduate training programme but not an apprenticeships scheme, said it ‘mistakenly’ included the term ‘apprenticeship’ in a list of keywords, on which Google Ads users place bids that give them the opportunity to appear at the top of search results. 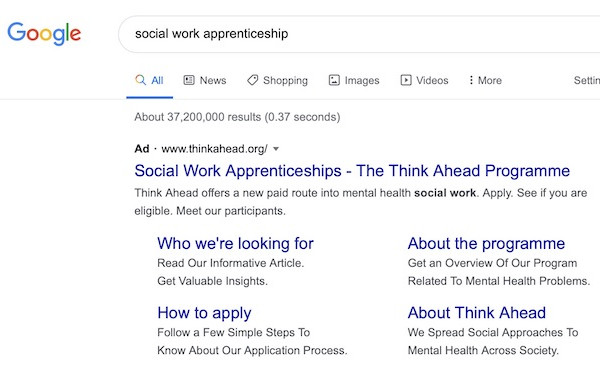 Social work apprenticeships, which were launched last year, offer a job-based route to gaining a qualifying degree, typically over three years, and are currently delivered by 29 providers, funded, in most cases, by the apprenticeship levy by local authorities and other larger employers.

They are a longer route to qualification than the three workplace-based fast-track schemes – Think Ahead and the children and families-focused Frontline and Step Up to Social Work. However, some councils have expressed a preference for apprenticeships over fast-track schemes – because they offer opportunities to develop experienced local social care staff who otherwise might not have considered a move into social work – while others are using them as one of a range of options for bringing in new qualified staff.

Think Ahead is set to expand its annual intake of trainees from 100 to 160 from September 2021 having recently benefited from a government funding injection of at least £18m.

Think Ahead’s Google Ads were first brought to Community Care’s attention in early October by sources alleging the provider may be in breach of the Enterprise Act 2016, which forbids the mis-selling of apprenticeships.

The legislation adds that “‘offering’, in relation to any course or training, includes offering or marketing it to the public generally or to any section of the public”.

Lawyers said that had the term ‘apprenticeship’ appeared on Think Ahead’s own website or marketing materials then it may have broken the law, but that by simply bidding on an adword the organisation could not expressly be said to be describing its course as an apprenticeship.

Anyone searching for genuine apprenticeships who clicked on Think Ahead’s link would soon find that the qualifications are not directly offered by the provider.

Samantha Baron, professor of social work and head of the school of health, wellbeing and social care at the Open University, the largest provider of social work apprenticeships, said the courses were “an important addition to the range of educational programmes available to study to become a social worker”.

“We support them and recognise the opportunities they provide,” Baron said. “It is important that educational providers accurately describe what they are marketing to potential applicants, and take active steps to ensure they do not mislead people looking to get into social work – especially as the educational options have become more complex.”

A Think Ahead spokesperson said the organisation had taken advantage of a scheme offering charities and not-for-profit organisations Google Ads for free, rather than having to pay for them as commercial organisations must.

The spokesperson said: “We make use of free Google Ads to promote mental health social work as a fulfilling career, and encourage as wide an audience as possible to join us in making a difference to people’s lives.

“We want to make people who search for apprenticeships aware of our programme, which is also a paid, work-based route into the profession, but had mistakenly included the term ‘apprenticeships’ in the text displayed – an error which has now been fixed,” the spokesperson added. “We are grateful to Community Care for bringing this to our attention.”