Trusting instincts and the evidence: NQSWs reflect on the past year 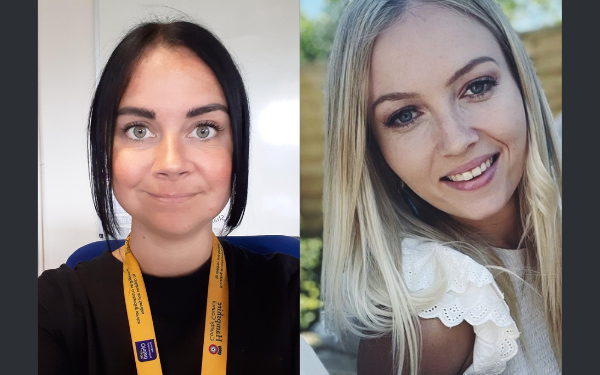 “I think it’s made me learn to trust my instincts and myself more than if I had been in the office.”

Gemma Anders and Scarlett Matthews are almost at the end of their Graduate Entry Training Scheme (GETS) in Hampshire and are reflecting on the experience of having had to do their formative social work training largely from home and via remote meetings during the coronavirus pandemic.

Luckily, both were familiar with Hampshire, either from student placements or working in social work support roles, before embarking on the GETS.

However, while Gemma had managed to complete four weeks of the scheme before the first national lockdown began in March 2020, Scarlett had not even finished her degree.

“So far the only face-to-face contact I’ve had with any colleagues from within my cohort, since we started GETS, was on the first day when I had to go to the office to pick up my laptop and direct work toolkit,” Scarlett adds.

Working from a one-bed studio

Initially, she was also having to work from a one-bed studio flat – talking to families and colleagues while sitting on her bed.

“That was hard. I found it really difficult to separate my personal space from my work – thank goodness I’ve now moved so I have a separate loungeroom space,” she says.

But while both agree it hasn’t been the ideal experience, they are grateful to have been in Hampshire where the support has been unwavering, despite the difficulties.

Scarlett says: “As an employer, Hampshire has made the training as interactive as possible with breakout rooms on Teams and using quizzes and other online activities. They are always asking for feedback and trying different things.

“My manager has also been really supportive and checks in with me every single day. I do feel I’ve been able to build a good relationship with her as a result of that.”

Gemma agrees. “Even though we can’t shadow workers in other teams they did make sure those workers attended our meetings, to talk us through their roles and referral processes. And, when we’ve been allowed, we’ve mixed things up a bit by having supervision sessions in person and going for a walk together, for example.”

Gemma was in the unusual position of having finished her social work degree in 2012 but, for personal reasons, had chosen to work in social work support roles until last year.

“When I was contemplating taking on a social worker role, I was really nervous because it had been so long since I did my degree. But my manager helped me find out what I would need to do to get onto the GETS programme in Hampshire and supported me through the whole process.

“I’ve always had good working experiences wherever I have been in Hampshire. I’ve always felt supported and safe. From talking to social workers in other local authorities, I know this isn’t the case everywhere. But in Hampshire, if I’m ever worried or not sure about how to do something, I know there are systems and processes in place which work really well and there are people to support me.”

Scarlett agrees: “Even though I haven’t been able to regularly meet up with my team in person everyone is really friendly and smiley and they are always happy to answer my questions. That support and friendliness is a sign of the culture of the local authority, I think.

Reflecting on the positives of lockdown

“I also do feel that Hampshire has really eased me into my caseload, so I’ve never felt overwhelmed.”

Gemma says she also appreciates the smoothness of the technology in the local authority.

“When lockdown first happened there were so many things that I had no idea how we were going to do them remotely. But it only took a couple of weeks until they worked it all out and got the tech in place and then it all worked well.”

And whilst she has sorely missed the shadowing opportunities and the opportunity to offload to colleagues face-to-face after difficult visits, she says there have been some positive outcomes.

“I’m a real worrier. I used to get tongue tied on the phone if I knew experienced people were around me and might be listening. Or I’d listen to others on the phone and think ‘I could never do that’.

“But my manager pointed out that everyone has their own way of doing things and the point is to all end up in the same place.

“I really reflected on that. And being at home on my own forced me to get over my panic and realise I did know how to do it and I could do it and I just had to be true to myself and get on with it.

“I think that’s been good for me and my confidence levels. I’ve always had my team available if I need them and we catch up every day to discuss concerns.”

Coincidentally, both Gemma and Scarlett point to section 7 reports they have completed as being one of the memories that will stay with them from the GETS experience so far. Unusually, in both cases they recommended the children stay with their father rather than the mother.

Gemma says: “I trusted my instincts and the evidence. I did worry about it though, but I was praised by the judge for the report and by my district manager. And most importantly these children just bloomed after that decision was made. It really boosted my confidence to know that I had been able to stay child focused and made the right decision for those children.”

Scarlett agrees she lost quite a bit of sleep over making a similar recommendation. “But it has worked out so much better for the child – she’s really thriving now.”

Perhaps the biggest testament to the support they have received is that both Gemma and Scarlett say they can’t imagine working anywhere other than for Hampshire when they finish their GETS year.

Are you interested in working for Hampshire County Council? Check out their employer profile to find out more or search for jobs.