By Rob Preston on November 16, 2021 in Children, Social work leaders 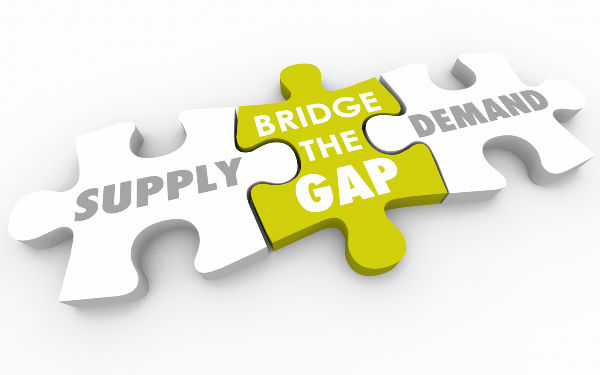 But despite the latter being a record figure, Ofsted said the statistics painted a “bleak picture”, with “too few carers with the right skills” to support the number of children needing a placement.

Over the past five years, the number of approved places and approved households have only increased by 2% while the number of children in placements rose by 9%.

And this increase  has been driven by a rise in family and friends carers, who are usually approved to care for specific children and the vast majority of whom do not offer other placements.

These figures correlate with the government’s children looked after statistics for March 2020, which showed that the proportion of children in foster care not with a relative or friend had decreased to 57% from 60% in 2018.

Lucy Peake, chief executive of charity Kinship, said the figures showed that it was becoming “increasingly urgent” that the government recognises and values kinship care. 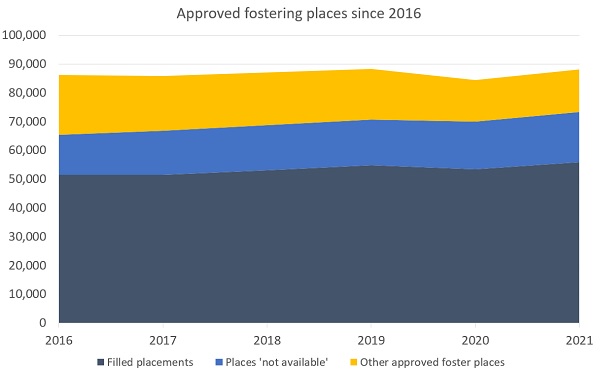 Ofsted’s figures also showed the effective capacity of the system had fallen over the past five years, with the number of vacant places plummeting from 21,160 to 14,005.

“[Year] on year we see more children coming into foster care, and too few carers with the right skills to give them the support they deserve. How long can this go on before the care system reaches breaking point?

“We rarely see children coming into care who don’t need to be, but with the right help earlier, some may be able to remain with their families. We also need to urgently boost the number of foster carers, making sure they, and the children they care for, get the right support.”

Ofsted also highlighted the fact that the proportion of enquiries from prospective fostering households that led to applications has decreased in recent years.

Sixty five per cent of foster carers approved in the year to March 2021 were over 50 while 26% were over 65, both similar rates to the year before.

“A wider pool of foster carers, who can meet the diverse needs of children and young people coming into care, will lead to greater placement choice, and as a result greater placement stability,” said Edwina Grant, chair of ADCS’ health, care and additional needs policy committee.

“However, without the support from national government this is becoming increasingly difficult as the number of children coming into care continues to rise.”

Grant also called for an end to “significant profits being made by a small number of organisations from fostering” and urged the care review to address this.

“Such practices cannot be justified, and we reiterate our call on government to introduce legislation, similar to that in Scotland, which prevents for-profit operations in this area,” she said.

Elvin alluded to his idea – proposed for consideration by the care review –  of a “national care family”, where responsibility for recruitment of foster carers would be taken out of councils’ hands.

“152 local authorities working separately are never going to join up effectively to do this. We need to move towards larger regional and/or national structures to operate the care system and take responsibility for adopter and foster carer recruitment,” he said.

The network said the increases in carers reported by Ofsted fell short of what was needed to meet demand.

‘Children should be listened to’

It previously estimated that 7,300 more foster families were needed in England when considering the specific need for households willing to care for teenagers, sibling groups, disabled children, and unaccompanied asylum-seeking children.

Katharine Sacks-Jones, Become’s chief executive, said the recruitment of carers had to be specific to children’s needs.

“They need foster carers in their local area to enable them to retain the relationships and links to the communities which matter to them.

“Children and young people in care should always feel their thoughts are listened to and acted on where possible during the process of matching them with suitable foster carers”.

More recruitment ‘could be costly’

“If it were possible to recruit many more foster carers to offer more choice for children, we would have to be willing as a society to fund vacancies,” he said.

“Foster care, as well as being a vocation, is also income for foster carers to be able to pay their bills, and they only receive fees when a child is living with them.”

Gallagher called for better support for children in placements and also said tackling poverty and poor mental health in families could ease demand on the care system.

‘Not everyone can be a foster carer’

He defended IFAs’ lower rate of applications resulting from enquiries about being a foster carer.

A spokesperson for the DfE said: “Local authorities are responsible for all children in care in their area, including those in foster care.

“We have made significant additional funding available in response to changing pressures on children’s services and we are investing in different approaches to help councils provide foster care places, including through digital tools that make it easier to match children with foster carers, and by trialling different ways to plan placements.”