Most children in care not satisfied with frequency of family contact, study finds

Survey of almost 8,000 children and young people finds many want more say over contact, and satisfaction with arrangements are worse among those in residential care or children who have had multiple moves 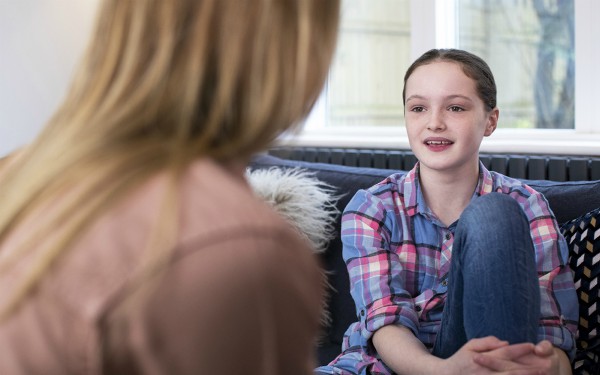 A mother having a chat with her daughter (iStock)

Most children in care either do not see their parents or siblings at all or feel they are seeing them too little, according to research with almost 8,000 looked-after young people published today.

While family circumstances were mentioned by many as a barrier to seeing family more, respondents to the survey for Coram Voice and the Rees Centre at the University of Oxford also mentioned being placed far from loved ones, visits being scheduled for inconvenient times and workers not taking wishes into account.

“My social worker is supposed to be doing police checks,” one young person wrote. “I have been here since September and the checks have not been done.

“It’s not like I can just visit – I live five hours from home,” they added.

The Staying Connected study  also found that half of young people – those aged 11-18 – did not feel involved in the decisions social workers made about their care.

It was based on responses to online surveys for the Bright Spots programme – a partnership between Coram Voice and the Rees Centre, which seeks to understand children and young people’s experiences of care – carried out from 2015-20.

The report found many children felt they lacked a voice and that decisions were taken for them by social workers or foster carers.

This resulted in missed opportunities for contact visits, which had the potential to “help repair fractured relationships, provide children and young people with an understanding of why they were looked after, and enable all family members to work towards care plan goals”.

The report was based on responses from 2,417 children aged 8-10 and 5,372 young people aged 11-18 from 36 English and six Welsh local authorities, who were broadly representative of the national care population. It found that:

In general, satisfaction with the frequency of contact increased with the length of time spent in care. But young people in residential care – who are likelier to be placed further from home – more often said they had too little contact with mothers, fathers and siblings compared with peers in other placement types.

There was also considerable variation among young people’s experiences depending on the local authority area they were in the care of.

Between 36% and 72% of young people felt contact with mothers was ‘just right’, depending on which council was involved, with satisfaction with sibling contact ranging from 40% to 71%.

Again, this was linked to geography, with up to 10% of young people in the care of some local authority areas reporting having had multiple placements compared with none in others.

Greater flexibility and support for families

The choice of location for contact was highlighted in comments by children and young people as being one key factor that affected how satisfactory it was for them.

Survey respondents said they wanted contact to be interesting, outdoors or in large enough rooms, and that they wanted to have more privacy, without being watched closely by supervisors.

“I would like to see my mum without social workers listening to everything,” one young person said.

Others said they felt authorities needed to do more to facilitate contacts at times to fit around family members who work, including at weekends.

The study recommended local authorities conduct work with family members to support them in improving their relationships with their children, so time spent together can be more enjoyable.

“Some of the difficulties that led to children entering care, such as parental mental health problems, may also be apparent during contact visits and additional support for parents could be put in place,” it said.

Lack of information, voice and involvement

Children and young people also reported a lack of involvement and information from professionals regarding contact.

Some young people felt that decisions about contact had been made some time ago and not changed in line with their age and current circumstances.

Others felt contact frequency was reduced without them understanding the reasons for the decision or said they were not informed about why they did not have contact with certain family members.

Young people who wrote positively about their involvement reported that they felt that they were being listened to, with their views respected, or they were trusted to manage their own contact arrangements

‘Services and workers must listen to children’

Recommendations made by the research team included:

Linda Briheim-Crookall, head of policy and practice development at Coram Voice, said the research showed there was “still some way to go” to fulfil objectives set in the recent children’s social care review around the care system “promoting the formation of lifelong loving relationships around children in care and care leavers”.

“This can only be achieved if more is done to build rather than break relationships with the people who are already important to children in care,” she said. “Services and workers must listen to children and young people about who they want to see, when and how and seek to make this happen.”

Responding to the survey findings, Katharine Sacks-Jones, the chief executive of Become, the national charity for children in care and young care leavers, said children in the care system were being “routinely let down” and echoed Briheim-Crookall’s call for children to be listened to more.

“We know from calls to our Care Advice Line just how emotionally distressing it can be for young people, who have already faced trauma, to feel increasingly disconnected from their identity, shared history, and community,” she said. “At the heart of this issue is the vital need to involve young people in decisions about their lives, such as where they move to and how frequently they wish to stay connected with family and friends.”

The government “must reform the system to ensure children in care can grow up in stable environments, maintaining connections with family, friends and the communities that love them,” Sacks-Jones said.

Staying Connected: The views of looked after children and young people on their contact arrangements was written by Dr Shirley Lewis, Professor Julie Selwyn at The Rees Centre Department of Education, University of Oxford, and the Bright Spots team at Coram Voice.