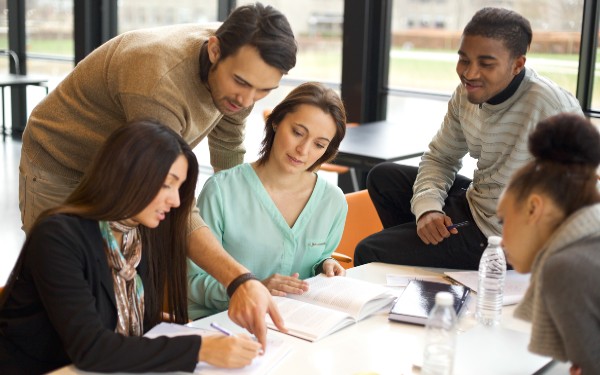 Katy Walpole is recalling the understandable fears she had as a social work student looking ahead to her first job.

“It is really scary – you think the first week you’re going to be doing court work or child protection.”

But in doing the Step Up to Social Work programme with Hampshire County Council, Katy had seen first-hand the support newly qualified social workers (NQSWs) receive through the Graduate Entry Training Scheme (GETS) for children’s practitioners – and had been reassured.

“I knew it was very well structured, and that you progress gradually,” says Katy, who has just entered the scheme’s second (and final) year, and works in a children’s assessment and safeguarding team (CAST) in Fareham and Gosport.

Like Katy, Rosie Kanavan, who has just completed the scheme, was able to see what GETS was like during a placement with Hampshire and agrees that it “wasn’t as scary as getting into social work seemed”.

Hampshire also made it clear up front what NQSWs joining the scheme could expect, adds Rosie, who also works in a CAST team.

“The interview process and application make it clear,” she says. “A couple of other places didn’t really tell you that and it put me off applying. I didn’t want not to know what I was getting into. It was quite reassuring to know what to expect.”

Rosie and Katy’s comments illustrate some of the key facets of GETS: that support is highly structured and gradual, with expectations that social workers should not be running ahead of the skills they have developed and been able to demonstrate.

This starts from day one. In their first four weeks, graduates do no casework and receive full-time training. Weeks five and six consist of three days’ training and two days with the trainee’s team, but any casework will be lower-level and involve co-working with experienced practitioners.

Thereafter, NQSWs are supported to progress, meeting a series of practice milestones once they have been assessed as meeting the required standard.

‘You can say if you’re struggling’

Supervision in the first three months is, in effect, weekly, with NQSWs receiving alternating fortnightly sessions from both their team manager and a practice educator.

While support decreases, and expectations increase, over time, this only happens at the pace of the trainee.

“It is done in a way that if you’re not ready to progress to full cases you’re not forced to,” says Rosie. “You can say if you’re struggling and you can have help.”

The supervision sessions provided by managers and practice educators are complementary.

“The team manager is thinking about the practicalities of the team and how we’re progressing cases to keep children safe,” says Katy. “In your time with the practice educator you can dissect a case a bit more, you can talk about theories or certain skills you want to develop.”

Practice educators also make sure that NQSWs’ caseloads are kept in line with expected limits, which, in the CAST teams are 10 over the first six months

Katy adds: “Each week they get a printout of where your cases are. I had one week sneaked over the limit so my practice educator was straight on the email asking how that can be dealt with. They make sure the benchmarks are enforced.”

Practice educators and managers are not the only sources of support, with NQSWs also allocated a buddy from within their team.

Says Katy: “I got allocated a buddy so I got to shadow her quite a lot. She came to see me do my first child protection investigation and then she fed back to my manager that I was safe to do child protection visits.”

Rosie says buddies are colleagues you can raise issues with before you do so with your team manager, adding that she has also benefited from support from elsewhere in her team and other CAST teams.

While milestones are set for trainees, progression is very much tailored to the individual.

For example, Rosie started her role after having done a stint in a children’s home, meaning she had good experience of working with teenagers but less with younger children.

“In my team we were getting a lot of teenage referrals, so when we did get a younger one, I got to co-work the case with a colleague,” she says. “I got to see what was expected of me.”

During the first year, progress is reviewed at three, six and sometimes nine months, followed by a final review after 12 months, all with your team manager and practice educator.

Katy says: “I’m handing in my final review and paperwork and it’s quite nice to see the progress made. Things that I found really hard at the start I’m now really comfortable with. It makes you feel quite valued as they are taking the time to review your progress with you.”

Two years, not one

A key differentiator between GETS and traditional assessed and supported year in employment (ASYE) schemes is that it is over two years, not one.

While the support social workers receive in year two is not as intensive as year one, Rosie says it is significant, consisting of monthly training sessions on specific topics and two supervision sessions with your practice educator, though with additional informal contact as required.

“It enhances the skills you’ve picked up in your first year,” she says, adding that she found a session on neglect particularly useful.

She says the support she received from her practice educator during year two was vital.

“I had a couple of cases which I found quite difficult, and my practice educator was really supportive to say that, just because one situation ended in a particular way it doesn’t mean others will.”

Katy says she is seeing her diary get populated with more training as she enters her second year and is impressed with the range of courses on offer.

“I had thought that in my first year I would be taught everything I needed to know as a social worker,” she says. “But you need to keep learning and there are things I know I want to develop. The big area I want to improve is my pre-birth assessment skills. I’m hoping to look at sibling assessments too as that’s quite an interesting dynamic. I’ve got a few of those themes in my cases. It develops that ethos in you that you are always learning.”

So, what would they say to a final-year student considering where to go for their first role?

Katy says: “Speaking to colleagues who I was at university with – it does seem that Hampshire’s scheme is very structured compared to other local authorities, and very uniform across GETS’ workers’ experience. And it feels like there are several unique elements to it, like the training you get at the start. There are really clear benchmarks for progression, and you are not rushing through the first months to be child protection or court ready.

To find out more about working at Hampshire, read its employer profile. If you are interested in applying, you can find the latest vacancies here.