Social care and social work are too often absent from the UK’s prisons despite an abundantly obvious level of need. And because of cost restrictions, political considerations and prison culture, which gives security the highest level of priority, this is unlikely to change in the near future. Yet social workers are making a vital contribution to the lives of offenders, ex-offenders and their families, which this special report sets out to reflect.

40% of prison governors say that social care in their prison is poor or below average. Community Care investigates.

The use of social workers by young offender institutions is increasing. We investigate the work they do at YOIs.

A head of social work at a low secure hospital on why social workers play such a vital role in upholding the rights of residents of secure settings.

Former Youth Justice Board chair Rod Morgan on why cutbacks in youth justice could have some positve results.

How social workers have a vital role to play in ensuring families remain together when a parent is in prison – a role that can reduce reoffending rates.

How social workers can help reduce reoffending rates among and improve the lives of prisoners with mental health issues who misuse substances. 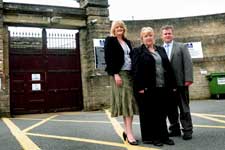 Despite the overall lack of social care in the UK’s prisons, which damages the life chances of prisoners after release, there are pockets of good practice.

The Bill that means higher caseloads

The Legal Aid and Sentencing Bill will increase the looked-after child population and also introduces some ‘perverse incentives’ for councils looking to cut costs.

The state of social care in prisons in pictures.

What are the skills and attributes required by social workers who practise with prisoners and ex-prisoners?

Juliet Lyon on why, so often, imprisoning women is the wrong, most damaging and costly option for courts.

How social workers should plan and carry out prison visits, understanding the prison culture, establishing proper communication channels with staff and remaining safe.
Our website uses cookies, which are small text files that are widely used in order to make websites work more effectively. To continue using our website and consent to the use of cookies, click click 'Continue'. Find out more.