Women account for most senior managers in social services but still face a “glass ceiling effect” in reaching the very top, research by Community Care has found.

Just over three-fifths of staff (61%) in the top three tiers of British local authority departments responsible for social care are women, but they account for only 51% of directors, figures obtained from 171 of the 206 relevant councils show.

Women’s representation is higher, across Britain, among second-tier managers (53%) and significantly greater among third-tier management staff (64%) than it is among directors.

The social services workforce in England is 82% female, while 77% of all managers across adults’ and children’s services departments are women, according to latest figures from the National Minimum Data Set for Social Care.

This means that in spite of making up the majority of staff at all levels, women’s representation falls progressively the further up the management chain they go. 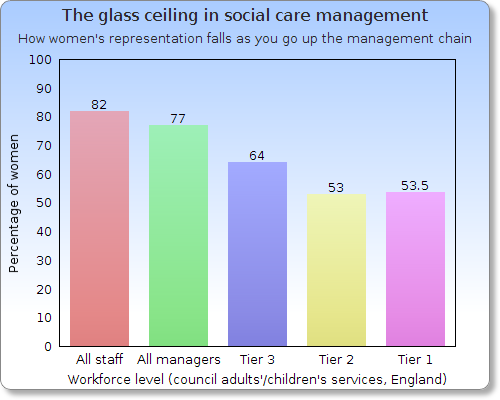 “Although the number of women in management and very senior management compares very favourably with other professions, they are still low in relation to the number of women in the children’s and adults’ workforce,” said Dave Hill, chair of the Association of Directors of Children’s Services workforce development committee. “What I would suspect is that there is still a glass ceiling effect going on.”

Reasons for the trend could include men being more willing to move regions or work away from home to take up a promotion.

“I personally have never been prepared to – when I had kids I decided I didn’t want to drag the family around the country,” said Hill. “But I think that may be part of it, also being prepared to live away from home is becoming more prevalent, with people taking a job in London when they live in Manchester.” “A lot of people come into social care because it can fit in with family patterns but while that’s fine in frontline roles it becomes harder at senior levels,” said Debbie Sorkin, chief executive of the National Skills Academy for Adult Social Care. “I’ve seen few instances of job shares being used.”

Hill said the 12-month programme was “oversubscribed among women”. Sorkin highlighted the importance of good mentoring and coaching, which are included on the skills academy’s leadership programmes, in supporting people to progress through the ranks.

“It’s about getting people to think and reflect for themselves that they could make a role change.”

Sorkin said this picture could also provide impetus for other women in social care to believe they could rise up the career ladder.

“There’s something about having people in those roles to show that this is not an aberration and people won’t have to strive to be different to reach senior positions.”

Lower proportion of female directors in Scotland and Wales

While 53.5% of directors in English councils were women, just 36% of Scottish first-tier managers were women, as were 46% of directors in Wales. There was also a particularly sharp drop-off in women’s representation in Wales between tier three, where 73% of managers are female, and tier two, where just 45% are women. England was the only country in which women’s representation was higher at director level (53.5%) than at tier two (53%).

However, the Association of Directors of Adult Social Services says about 55% of its director members are women, so this result may reflect the fact that responses to Community Care’s survey were obtained from 124 of the 152 English councils.

Councils were asked to provide the gender, along with job titles, of all staff in the top three tiers of management in departments responsible for adults’ or children’s social care. While some councils provided details only for managers with social care responsibilities, others provided details for all managers, including those with responsibilities in education, public health or housing. All responses were included in the published results.

In the few instances where a job was shared both postholders were counted. In England, 40% of councils had a director who was was responsible for all of their adults’ and children’s social services functions; a further three (2%) had a director whose responsibilities cut across both service areas.

A few of the first-tier managers in England were not the statutory director of children’s or adults’ services because of the way their authority was structured. In Essex, for example, though Dave Hill holds both statutory roles, he is not responsible for operational social care functions, which are overseen by other directors.