Research by the Fostering Network also revealed 53% of foster carers said they are not paid for fostering, on top of their allowances

By Luke Stevenson on February 18, 2015 in Children, Fostering and adoption, Looked after children

More than half of foster carers feel they are not treated as valuable members of a child’s life, research by The Fostering Network has found.

Published today, The State of the Nation’s Foster Care, found most foster carers do not feel regularly valued by the social care team who share responsibility for the child.

Being excluded from meetings about a child’s future and having their views disregarded were just some of the examples cited in the survey of 1,082 foster carers.

But individual social workers were praised by foster carers. Nearly three-quarters (73%) of carers said the social work support they received had been very good or good. However, there were also concerns raised about high social work caseloads, which can make practitioners unavailable to children.

The research also revealed that more than half (53%) of foster carers said they are not paid for fostering, on top of their allowances. 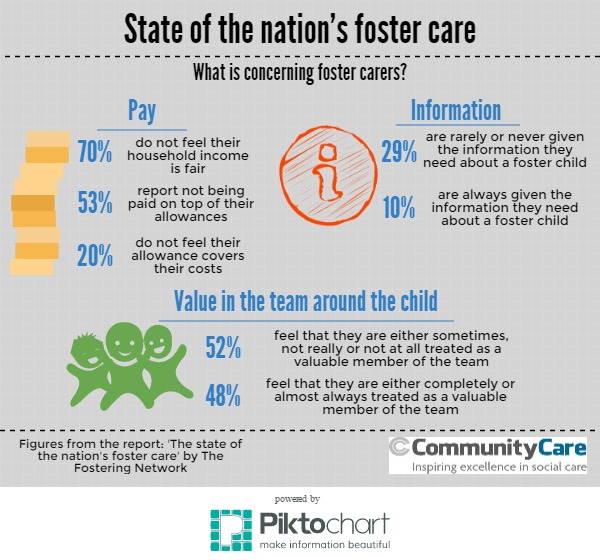 The Fostering Network has called for a new approach, which increases the emphasis on the role of foster carers in social work training. This training to should be mandatory, Swain said, adding there should be a foster care register too to boost foster carers’ status. “We need to have a regulated workforce with minimum qualifications [for] entry,” she said.

Helen Holgate, who fosters for a local authority, said it’s “common” for foster carers not to feel like a part of the team.

They are paid their allowances and a skills fee, which she says is “wholly inadequate” for the task. “To be honest we’re at the point where I feel we can’t afford to foster any longer,” she added.