Inside the drug rehab ‘giving children back their mothers’

An inside look at Trevi House, one of few rehabilitation unit that house women and their children to try and keep them together Some of the staff at Trevi House. Photo: Gary Brigden

“I was living in a squat, using drugs daily, and then I found out I was three months pregnant.”

Samantha* is 38 years old, and a recovering heroin addict. Her drug habit cost her a home and, temporarily, her first two children, who both live in care.

When we meet she is cradling her third child in her arms – the baby she learned about while living in that squat and is desperate not to lose.

“I just couldn’t go through with having an abortion – I couldn’t do it. I continued to use. I was scared she was going to get taken off of me,” Samantha explains.

We are sitting in the busy dining room of Trevi House, the drug and alcohol service Samantha hopes can help her both recover and keep her and her daughter together. This is one of the country’s only residential treatment services to support drug and alcohol addicted mothers while they live on-site alongside their children.

Staying for a maximum six months, the service aims to give families the opportunity to grow strong and lasting bonds. An on-site nursery means mothers can get professional support during the day, while children have their emotional needs catered for by expert staff.

Today, as the other mothers leave the room following a lunch filled with chatting and laughter, Samantha’s daughter is staring up at us having her own lunch from a bottle. The pair were referred here after Samantha sought help when she was 32 weeks pregnant.

This is her second time at Trevi after a relapse. She is seven weeks through her planned 13-week stay and this time, she says, she’s committed to making it last.

“They say you have to come here for yourself, it’s not just for the child. I thought I got it [first time], but I didn’t. I think this time is different, because I am doing it for myself and the bonus is I’ve got my child with me…It’s more than a bonus,” Samantha says. 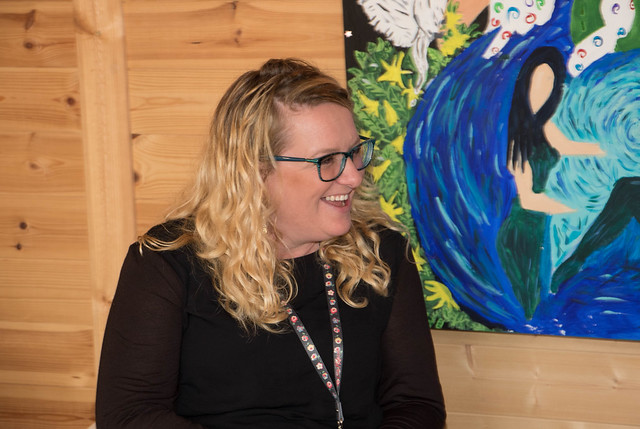 Set up 25 years ago, Trevi sits in a quiet part of Plymouth. The service’s model of intervention focuses on three areas – parenting, addiction and healthy relationships. The aim is to support mothers to develop the practical and emotional skills they’ll need to convince local authorities that their children can stay with them long-term.

Key to achieving this is the staff’s ability to get women to trust them – often by establishing that this is not social services, who many women have had negative experiences with before – and to empower them.

The staff here include key workers, counsellors, a social worker, nursery workers, medical staff to manage detox medication, volunteers and a cleaner. There’s also a cook, Ann, whose singing is just one of the many charming background noises that help make this collection of large buildings, narrow corridors and closed bedroom doors feel bubbly and full of activity.

“Most families that come here have been in abusive relationships as adults and often as children, so we try to educate women to ensure they make better choices going forward,” Shead says.

Campbell explains that most of the mothers Trevi works had dysfunctional, impoverished or abusive childhoods and have used drink and drugs to help “escape their fears or their emotions”.

A crucial part of Trevi is the detox programme, which means mothers can stay with their children while coming off methadone, rather than be separated.

A large part of the therapy is to help mothers identify the root causes of their addiction.

Staff constantly monitor progress. Certain sessions are completely confidential unless there is a safeguarding concern. But for the most part placements here work towards supporting families to stay together, and this needs to be evidenced.

“We try to create an environment that’s nurturing, therapeutic and somewhere women feel they can trust us, and we work hard to do that,” says Shead.

“On the other hand we are an extension of the arm of the local authority; if we’ve got concerns about a woman’s parenting we will name it and do something about it.”

For many mothers, Trevi House is a last chance to prevent their child being taken into care or adopted. While the house often has the desired effect, sometimes the situation doesn’t turn out the way mothers hope.

“We take pregnant women and sometimes they leave without their child, that’s the reality of it,” Shead says.

“But even in those cases, that baby has had a really important experience; they have been with their mum. In terms of their life story further down the line, they have photos of them with their birth mother.

“We will be able to say to the mum: ‘You’ve had a chance, you’ve had an opportunity.’ Something we’re really passionate about here is trying to give mum that opportunity to turn it around in an environment that’s safe.”

Placements here are usually joint-funded between adult and children’s social care services. However, at a combined £1,570 a week cost for a mother and child, the treatment is expensive and cutbacks to council budgets mean some authorities struggle to afford it.

Currently the house is half-full, with no waiting list. Campbell says the service needs about 30 families a year to sustain it.

Samantha is glad to have secured a place. She loves it at Trevi and feels the support she receives is a world away from other services she’s used. In the past, she’s felt social services wanted her to fail before she started and gave her “false hope”.

“I think sometimes they can personalise things in the wrong way, [and are] quite closed minded. They think ‘drugs, child, take the baby way’. Whereas maybe a bit of support would be helpful, not just for the parent but for the child,” she says.

She feels she has that support now. Trevi’s workshops and therapy sessions have helped her identify the root cause of her drug abuse, as well as contributing factors she never thought about before.

For Samantha, a key aspect in this has been her feeling able to put her trust in the professionals at Trevi, which she says can be difficult from a “drug-fuelled life”.

Close relationships between the people and the services are evident everywhere. The nursery walls are colourful and adorned with hand-made pictures. Because of the small group sizes, nursery staff are able to focus on each child’s learning style.

For Shead, one case explains the impact the environment can have.

“The mother came here pregnant, she delivered at the hospital and there were a couple of concerns. When they came back we were all feeling a bit worried about how she was interacting with her son, and what we saw in nursery is the changes in the adult reflected in the child,” she says.

“Her son in nursery just wasn’t engaging, but as mum started to really turn it around, suddenly this little baby was just smiling, and the two of them transformed together.”

Each resident of Trevi House might have a story that sounds similar but they are all individuals, and each makes an imprint on staff. Every mother that walks into the room as Shead, Campbell and I talk is met with a smile and a brief chat about how they are getting on.

A smoking shed is adorned with names of mothers and children who have lived here before. Staff speak about how hard it is to say goodbye. The employees laugh together as they recount the time two of them delivered a baby on site. They talk about the heart-warming successes and how mothers from years ago still pop in with messages about how they are doing, and the heartbreak when the service gives all it can but a placement just won’t work out. There’s a sense of pride when they explain that women who have been through this house go on to work in this field, supporting others in counselling, even becoming social workers.

Support for mothers doesn’t just end with their placements. If they relocate to Plymouth, which many do, they can use The Sunflower Recovery Project, an extension of Trevi’s support. Funded by the Big Lottery Fund, it works to help women with resettlement, and aims to build a ‘recovery community’.

Staff on this project work from 8am to 8.30pm, seven days a week, to ensure that women are constantly supported to remain free from drugs and alcohol. There is also a peer mentor scheme, and in a local church hall a space for women to get together and socialise.

For Shead, the value of Trevi House is shown by what women say about it.

“They report time and time again that they just wouldn’t be able to do this if they didn’t have their child with them,” she says.

“Someone said to me just this week: ‘What you do at Trevi is it’s not that you give women back their children, you give children back their mothers.”

It’s that outcome which Samantha hopes to get from her second time here. On the day we speak it’s one of her older children’s birthdays, but she has been told it’s best for recovery if she focuses on herself and her youngest daughter, still drinking milk in her arms.

In the long-term, she hopes to re-establish contact with her other children and to not relapse again. She believes she is in a better place this time and says she won’t move back up country after finishing her treatment.

“Obviously I’m still nervous because I have relapsed before, and drug and alcohol addiction has been a massive part of my life, but I’ve been given tools, [and been encouraged] to talk more. So if I’m feeling worried about anything, no matter how little it is, I can just phone somebody from here. It will be much easier,” she says.

“It is so important for the mother’s root cause to be fixed, and then hopefully you won’t have another generation of people doing the same things.”

*names have been changed. The baby in the photo is Hannah Shead’s, and not the child of a mother using Trevi House’s services.