By Mithran Samuel on December 3, 2019 in Workforce 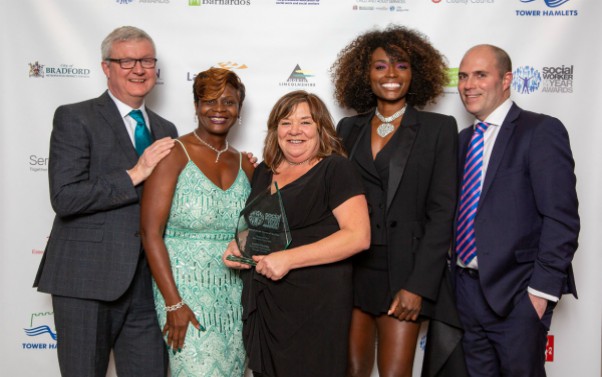 A Rotherham manager who helped steer its leaving care service from ‘inadequate’ to ‘outstanding’ in the aftermath of its child sexual exploitation (CSE) scandal has been named overall social worker of the year.

Louise Pashley picked up the gong, alongside the team leader of the year for children’s services prize, at the annual Social Worker of the Year Awards ceremony last Friday.

In an event that mixed praise for the profession along with sombre reflections on that day’s London Bridge attack and social divisions highlighted by the election, the chief social worker for adults, Lyn Romeo, was awarded the outstanding contribution to social work.

In addition, 15 other practitioners, teams and organisations won awards for their social work practice and management across adults’, children’s and mental health services, while 17 others won ‘silver’ prizes.

Pashley, who is Rotherham born and bred and has worked for the council for 26 years, starting as a personal adviser, manages one of its two leaving care teams.

In 2014, the year in which an independent inquiry issued a devastating verdict on the council and partners’ response to CSE, Ofsted rated the council’s leaving care service as inadequate, saying it could not assure itself that young people were safe. Three years later, the inspectorate rated the same service as ‘outstanding’, saying that “a skilled and dedicated team of staff keeps in constant contact with the young people to ensure that they stay safe and are protected against harmful behaviours”.

Pashley’s awards nomination came with glowing tributes from young people and colleagues for her commitment and high expectations for care leavers, and set out her key role in the transformation of the service.

The council’s service manager for leaving care, Sharon Sandell, said the team and young people were “all incredibly proud of Louise”, citing her “focus and unerring commitment to getting what is right for our young people”.

Romeo was not able to pick up her award at the ceremony, as she is currently on sabbatical in Australia, caring for her mother, but was represented at the ceremony by her two interim successors, Fran Leddra and Mark Harvey.

Romeo qualified in 1977 and then worked across child protection, hospital discharge, mental health and learning disability services before becoming England’s first chief social worker for adults in 2013. Since then her successes include inserting a clear role for principal social workers in the Care Act 2014 statutory guidance, while she has also commissioned a raft of practice guidance and standards across a range of topic areas and striven to increase social work’s role in the NHS.

Awards trustee Rob Mitchell, principal social worker at Bradford council, said: “Lyn is an inspirational leader, a quiet radical, who is extremely personable and sometimes understated in her approach but tremendously impactful in terms of the change she has been able ot affect.”

The awards were started in 2006 by social worker Beverley Williams, who organised them while working full-time and with no sponsorship, since when they have grown considerably.

Williams remains on the awards’ board of trustees, which is now chaired by former Birmingham adults’ and children’s services director Peter Hay.

He said: “Being recognised on a national scale is an outstanding achievement not just for our winners but for all of our 94 finalists and I’d like to personally congratulate each of them, they should be extremely proud of their achievements.”

Social Worker of the Year winners