By Alice Blackwell on February 4, 2021 in Children, Coronavirus

Cafcass case numbers continued to rise to a record level in December, though caseloads for family court advisers (FCAs) have been managed through staffing increases.

The number of outstanding open cases reached 42,256 in December, continuing an upward trajectory that started last May. This has been driven by higher referrals – it received 4,893 new cases in December 2020, 8.2% up on December 2019 – and delays in processing cases through the family courts caused by the pandemic. 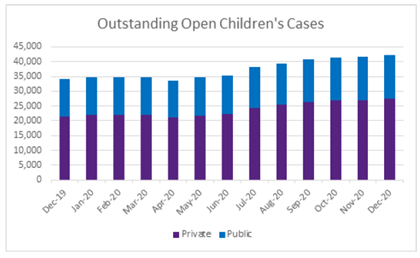 As of 22 January 2021, the national average caseload for FCAs for work after a first hearing was 23.3, a slight drop from mid-November 2020, when it was 24.1. Cafcass attributed this to an increase in agency staff, permanent staff and self-employed contractors.

However, a spokesperson for the organisation said: “We remain under huge pressure and things can change very quickly. We are therefore monitoring the situation very closely with weekly reviews of aspects of capacity, including workload, workforce planning and absence in each of our service areas.”

She said Cafcass could not rule out extending the prioritisation protocol – introduced in November 2020 in South Yorkshire and the Humber – to other regions, though there was no immediate threat of it doing so.

Under the policy, public law and high-priority private law cases are allocated to FCAs, but other cases are left until an adviser became available.

“The serious and unrelenting impact of high caseloads on our frontline social workers and managers may mean that we are forced to consider triggering the protocol in all regions for that reason alone. This is currently under discussion with our Cafcass board and senior management team.”

Cafcass has said that the number of children and families experiencing delays in the family courts is an “unsustainable system problem” and cannot be solved by it alone, despite the £3.4m in extra funding it received in the summer from the Ministry of Justice to help it through the demands of the pandemic.

Ian Lawrence, general secretary for Napo, the trade union for Cafcass staff, said that the latest figures were “truly shocking” and “show a significant increase in what were already high workloads in a very short space of time”.

He added: “Napo is concerned that this could lead to an extension of the prioritisation protocol which is very worrying… [Cafcass] need extra resources and financial support now.”

Lawrence said that Napo would be writing to children’s minister Vicky Ford, to ensure that urgent action would be taken to guarantee the stability of the service. He added that “the organisation risks losing staff if these issues cannot be addressed urgently”.

Nagalro, the professional body for social workers who represent children in court proceedings, said it was concerned the backlog of children’s cases has risen.

With the number of cases received by Cafcass having risen from 36,173 in April to December 2014 to 47,361 in April to December 2020, a Nagalro spokesperson said: “Children caught up in this backlog are simply left in limbo and this dangerous situation is exacerbated by the current lockdown restrictions not least the closure of schools.

“Nagalro’s overriding concern is that the children involved receive a service which is their statutory right… We understand that Cafcass has approached a number of what they describe as ‘high performing experienced practitioners’ who have recently retired to take on cases. We hope that this process will assist Cafcass in discharging its duty to the children subject of those applications.”

A Ministry of Justice spokesperson said: “We recently agreed £3.4m of extra funding (agreed in the summer) to ensure Cafcass has the staff and resources to deliver its vital work, through unprecedented demand during the pandemic. Cafcass operates independently of the Ministry of Justice and is responsible for decisions about how best to deploy resources across its service areas.”

Social work is buckling under the pressure of lockdown: government – and the public – must respond
Council failed to consider woman’s human rights when entering home without legal basis, says watchdog