Social Workers Union says low triage threshold means too many practitioners are being wrongly investigated, while others placed on interim orders for excessive periods, causing "emotional and reputational damage"

By Charlotte Carter on February 12, 2021 in Workforce

Severe delays in the fitness to practise (FtP) process are having a “life-changing impact” on practitioners, the Social Workers Union has warned.

The issue was one of a number of concerns raised by the union – which represents 15,000 social workers – with Community Care in relation to the way Social Work England was managing fitness to practise.

Other concerns included the regulator having a “low bar” for deciding that cases merited further investigation at the triage stage, for example, where “malicious complaints” had been received from individuals who were not happy with social workers’ interventions in their lives.

The union’s general secretary, John McGowan, also raised concerns about practitioners being placed on interim conditions of practice orders for several months, in some cases preventing them from working or causing “emotional and reputational damage”.

In response, Social Work England said that it believed the FtP process was “fair, effective and robust”. However, it conceded it was receiving a higher number of concerns than its predecessor, the Health and Care Professions Council (HCPC), an issue that has been compounded by the pandemic.

‘Not sustainable for the long-term’

In his report to the regulator’s December board meeting, chief executive Colum Conway said that cases were running at a higher level than expected, and that the organisation was planning to restructure its FtP teams and increase resources for the process.

While Conway said he was “confident” that this would “manage caseloads well over an appropriate timescale” he said it was “not sustainable for the longer term”.

He added: “We have therefore planned to undertake further analysis on the nature of the complaints coming to us and determine how we can influence the landscape that is currently producing this level of complaints.”

McGowan said that while he understood the pressures that the regulator was under, the impact on practitioners of long delays in the processing of cases was not acceptable.

“I am fully aware of the difficulties that Social Work England have encountered in terms of a significant number of legacy cases being transferred over from the HCPC and the added complications of the Covid-19 pandemic. However, the delays in these processes are having life-changing impacts on registrants and for this reason, I do not feel that it is acceptable for these delays to be continuing.”

‘Emotional and reputational damage is huge’

McGowan cited a case in which a member checked the progression of their fitness to practise case with Social Work England and was informed that all paperwork had been received and that, as soon as the bundle was redacted, this would be forwarded. However, four months later McGowan contacted Social Work England on the member’s behalf and was told that the regulator was “still waiting for the bundle to be redacted”, which he said was “unacceptable”.

He added: “We have members waiting years for the outcome of their fitness to practise proceedings. I have one member who has been on an interim conditions of practise order for 14 months and her case has still not progressed to the case examiners for a decision to be made as to whether or not her case goes to a hearing.

“In the meantime, the emotional and reputational damage that this can cause is huge. I do think that the delays bring the whole FTP process into disrepute.”

He said practitioners were being placed on interim conditions of practice orders – which place requirements on the registrant’s practice – for too long or having them applied several months after concerns were raised about them.

McGowan said: “One of these members was referred for a conditions of practice order 22 months after she had been referred to HCPC. More concerningly, despite this social worker having worked for over a year as a locum social worker before the hearing with no issues raised about her practice, this order was granted, which resulted in her losing her position.”

Amid the high number of concerns being received by Social Work England, McGowan said the threshold for cases being referred for investigation, rather than closed, at the triage stage, was too low. 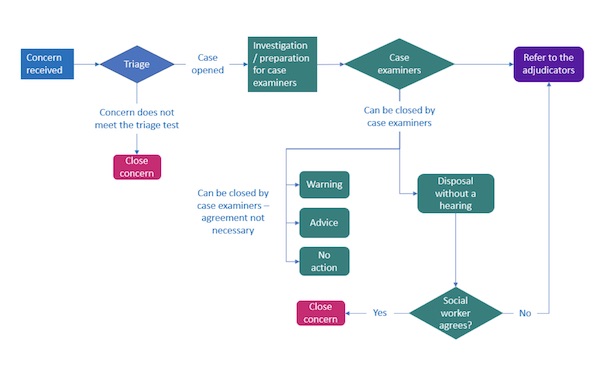 These included investigations being carried out in cases of “malicious complaints” about social workers from service users unhappy with practitioners’ decisions or recommendations.

McGowan added: “Some of these are quite clear on the face of them that they are not fitness to practise issues and in our view, a social worker should not be spending months under investigation for simply doing their jobs.”

McGowan said it is also concerning that there did not appear to be a procedure for dealing with vexatious complaints.

“The purpose of such a policy would not be to necessarily exclude concerns, but to bring about a way of managing a complainant when they are presenting with unreasonable, persistent complaints about the same social worker or are covertly recording/videoing social workers,” he said.

Overall, McGowan said the union had received 100 cases of concern regarding the FtP process from members recently, with half of these being at a serious level of concern.

In response to the union’s comments, Jonathan Dillon, executive director of fitness to practise at Social Work England, said the regulator’s overall objective was to protect the public and legislation set out how it must do this.

Proccess is ‘fair, effective and robust’

He added: “We understand that the fitness to practise process can be stressful, but we are confident that it is fair, effective and robust. Social workers should be reassured that at every stage, from triage onwards, we follow a statutory process in a legal framework. Anyone who requires support can access a number of organisations via our website.”

Dillon said the regulator was receiving higher levels of concerns than the HCPC, which had created challenges when combined with the impact of the pandemic, adding that organisations it routinely shared information with to progress cases had also been affected.

“In response to changes in the working environment and wider sector this year we have put strategies in place to maintain effective case progression and to ensure that cases are resolved appropriately and proportionately,” he added.

“The fitness to practise process was developed as part of our rules and standards consultation in 2019, which involved social workers, trade unions, employers and people with lived experience of social work.

“We meet fortnightly with the trade unions to answer their questions and discussed these matters with the Social Workers Union at our most recent meeting.”

Social Work England has published guidance on the FtP process. This includes information on the support available to social workers and links to organisations that may be able to help them.

22 Responses to Delays in fitness to practise process having ‘life-changing impact’ on social workers, says union