General secretary of the Social Workers Union John McGowan describes the role the union has played in the pandemic, as well as the benefits of unionisation, after being re-elected to the role

By Thomas Smith on June 14, 2021 in Coronavirus, Workforce 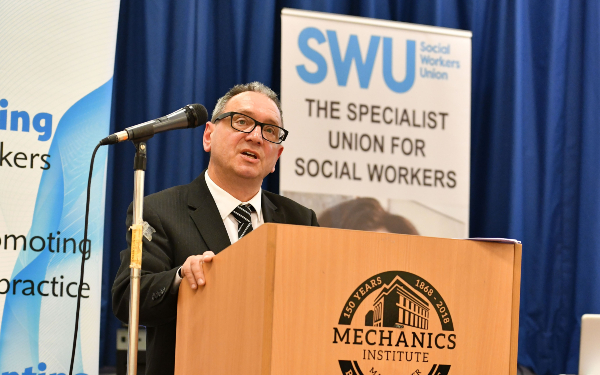 “Our inbox was constant about PPE…The initial stages were a shock to everyone, we had members dying, we had members who were in crisis, we had members who were taking hot water bottles and flasks so they could wash their own hands and that was unacceptable. But we couldn’t do anything about that.” So recalls John McGowan, recently re-elected general secretary of the Social Workers Union (SWU), of the early days of the pandemic.

The number of referrals to the union went “right through the roof” as members were placed under different terms of employment due to changing working practices.

McGowan continues: “We provided enhanced 1-1 consultations through our duty service to support members and raise issues with employers. This led to significant changes from employers with some employers challenged formally to change guidance on safety.”

Among the measures taken by SWU to help members were launching with the British Association of Social Workers (BASW) the social worker wellbeing and working conditions: good practice toolkit and developing a position statement to support members’ health and safety.

SWU was created by BASW in 2011 to enable it to offer union-style services to members. The two organisations remain linked, with SWU membership offered as an additional benefit for BASW members for an extra £25 a year. McGowan, who was involved from the beginning, became the first independent general secretary of SWU in 2016.

McGowan says the rise in SWU’s membership illustrates how the pandemic has made people think about the protections they need at work. Previously, he says, social workers tended to consider joining a union after something goes wrong, “like joining the AA or RAC once your car breaks down”.

He adds: “I think that mindsight is moving now, and social workers are more proactive and understand their working conditions can be in decline, and they can do about that by joining a trade union.”

The biggest social work union, UNISON, has 40,000 members in the UK, but many social workers are not unionised.

He adds: “It doesn’t have to be my union. I just want them to join something to take that forward.”

McGowan highlights the benefits of SWU being a dedicated social work union. Excepting such roles as administrative staff, all those involved in SWU casework are social workers, a factor McGowan describes as “worth its weight in gold, because we understand the profession”, which he says helps his members.

He says: “When we negotiate settlement agreements, when we negotiate employment concerns and workers come out the other end and they stay in the profession, that’s a positive. 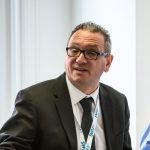 Like his SWU colleagues McGowan remains a registered social worker and continues to actively practise as circumstances allow. His career has included working on the Isle of Skye and the small islands, off the west coast of Scotland, along with the Kintyre peninsula.

The close nature of these communities meant that he might meet someone in a supermarket he had done a child protection referral on, or see someone he’d visited in the public swimming pool.

Having worked in the city as well, he says his career has ranged from young people involved in knife crime to those involved in stealing tractors.

SWU is not involved in collectively bargaining on behalf of social workers in relation to their terms and conditions. Instead, in local authorities, this is done by UNISON, Unite and GMB through the National Joint Council for Local Government Services.

McGowan adds that many local authorities are offering good support and working conditions to their social workers. These authorities are “retaining staff, and people also want to work for them”. He reveals that he writes directly to the directors in authorities where he hears of good work being done, noting “the surprise is overwhelming sometimes”.

The good work being done by social workers is something McGowan laments the sector does not have the opportunity to tell as much as the difficult stories.

He says: “I think the reality is in the UK we’ve got probably the smallest amount of child deaths or adults deaths due to social workers’ mistakes probably in the whole of Europe or the world; we’re really tight on all our assessments and we forget to tell that tale”.

Early Intervention Vehicle Practitioner -Adult Care Services & CLCH sites in Hemel Hempstead
‘A role in which every day matters’: how discharge to assess is improving outcomes for people and job satisfaction for practitioners