Social workers and care staff are being encouraged to share their reflections on the pandemic through time capsules, designed to provide a lasting legacy and learning for future generations 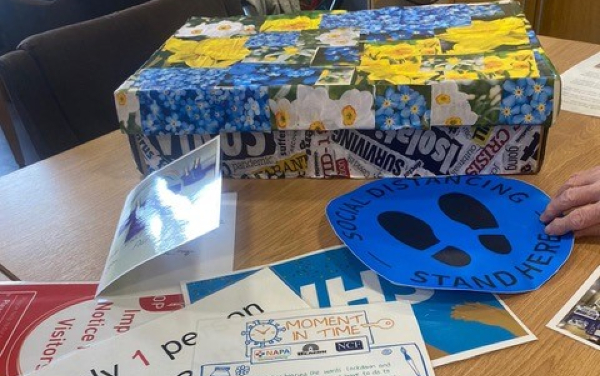 A Moment in Time memory box

Whatever the consequences of the lifting of restrictions, there is little doubt that 19 July marked a significant moment in the pandemic in England. However, whilst the ‘Thank You Day’ for NHS staff and ‘Clap for Heroes’ (formerly ‘Clap for Our Carers’) have provided moments of collective gratitude, and deaths from Covid have been recognised by events including Stars in Memory and Marie Curie’s National Day of Reflection, there has been less focus on capturing memories from the pandemic for posterity.

Memory work has been shown to be very helpful within bereavement processes (Turner, 2014; Denis and Makiwane, 2003), and memory boxes are also commonly used in dementia work. With children, the use of memory boxes can provide an important means of speaking about bereavement and loss, (Denis and Makiwane, 2003; Thomson and Holland, 2005), whilst in fostering and adoption, the use of life story books is now well established (Rose, 2017).

To help capture memories from this significant moment, the National Care Forum (NCF) and the National Activity Providers Association (NAPA), with my support, have partnered to create #Momentintime21. This national project aims to capture stories from the social care and social work sectors, as well as the wider community, through the creation of ‘time capsules’, which will be sealed and then opened collectively on 19 July  2022.

Resources and ideas for making and filling a ‘Moment in Time 21’ memory box can be found, until late September, on the NAPA and NCF websites, alongside artwork and template ‘seals’ for the boxes.

Those boxes that have already been filled and sealed have included papier mâché self-portraits of care home staff, memories of Euro 2020, and poems and letters written by care home residents, the contents of which are unknown until the ‘unboxing’ in July 2022.

The emphasis on memorialising throughout the pandemic has been on much needed recognition of the death toll and disruption to people’s lives. However, feedback from those that have already made ‘Moment in Time’ boxes has demonstrated the equal importance of capturing memories.

As one activity co-ordinator commented: “In 12 months’ time, people will have forgotten them feelings.”

In one care home, residents had previously planted a memorial garden with daffodils and forget-me-nots that would flower every year at the time of the first lockdown, and they chose to cover their ‘Moment in Time’ box with pictures of the flowers. Although some of the memories were challenging, as people remembered those that had died, there was also a lot of laughter.

As one participant shared: “We were laughing about the days that people were buying toilet roll like it was going out of fashion.”

Mix of laughter and sadness

Other participants in care homes found that the making of the boxes provided an opportunity to pause and gather previously unsought feedback from residents, carers and visitors. For others, one box was not enough, and they had to create two for everything that they wanted to remember. For everyone that has taken part so far, there has been a bittersweet mix of laughter and sadness, but the focus throughout has been on sharing and finding spaces to communicate previously untold stories.

This project has been kindly supported by the British Association of Social Workers and we encourage you to join in, sharing photos etc of your ‘Moment in Time’ boxes on Twitter under the hash tag #Momentintime21. If you need advice, call the NAPA helpline on freephone 0800 1585503 or email helpline@napa-activities.co.uk.

We hope you will also join us in opening these boxes on 19 July 2022. Following that, the boxes can be maintained as significant archival and educational resources for future generations when learning about this pandemic.

Denise Turner is a senior lecturer in social work whose research interests include loss, bereavement and death.

‘Very significant risks’ from self-isolation exemption for double-jabbed social care staff, says ADASS
“We work to people’s strengths to bolster their confidence and nurture the best in them.”
Two in five best interests assessors not receiving supervision