By Rob Preston on September 24, 2021 in Children, Social work leaders

Correction: The story originally stated that ‘inadequate’ councils were three times as reliant on agency staff than ‘outstanding’ authorities. We apologise for the error.

Children’s services rated outstanding by Ofsted use a quarter of the proportion of agency staff as those deemed ‘inadequate’ by the inspectorate.

There was a similar – but less significant – relationship between sickness absence rates and caseloads, as measured by the DfE.

On the back of the findings, Ofsted said that councils that did not create the conditions for good social work practice experienced higher workforce instability, contributing to low ratings. However, social work leaders argued that poor Ofsted ratings could demoralise a council’s current staff and detract potential employees while adding pressure on the authority to hire agency workers to reduce workloads.

Use of agency staff was the biggest divide between authorities with different Ofsted ratings.

Local authorities rated outstanding by Ofsted had an average agency usage per full-time equivalent staff of 6.4%; for ‘good’ councils the rate was 15.1%, for ‘requires improvement’ authorities it was 16.4% and for ‘inadequate’ ones 27%.

Overall, English local authorities had an average agency rate of 16% and a vacancy rate of 15.8%.

Average caseload and sickness absence per full-time employee, as calculated by the DfE, both decreased the better local authorities were rated, although not to as significant a degree.

‘Outstanding’ local authorities had an average caseload of 15.2, for ‘good’ councils it was 16.2, for ‘requires improvement’ authorities 16.5, and ‘inadequate’ ones 17.3. However, practitioners have criticised the DfE measure, which gave an average caseload of 16.3 last year, as a significant underestimate and the department has said the figure should be treated with caution.

But ‘inadequate’ councils had a turnover rate of 13.4%, which was lower than the average for all local authorities of 14.5%. 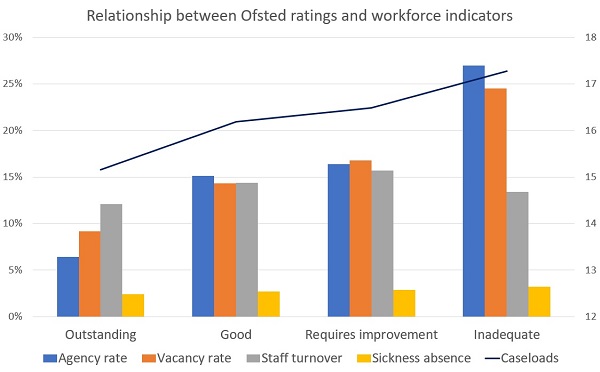 The findings are reflected in the third installment of the Department for Education (DfE)’s longitudinal study of local authority child and family social workers, published in July, which found that respondents were more likely to work long hours in a poorly rated council.

Social workers in local authorities that Ofsted rated as inadequate were more likely than those working in other authorities to report working more than 45 hours per week – 36%, compared with 24% among those in ‘outstanding’ councils, 22% in ‘good’ authorities and 26% in those rated requires improvement.

They were also more likely to state they were working above their contracted hours “all the time” – with 45% saying so, compared with 32% in councils rated as outstanding.

Social workers in ‘outstanding’ services were less likely than average to agree that they were asked to fulfil too many roles – 44% compared with 55% overall.

Eleanor Brazil, who has been a DfE-appointed commissioner at several councils after their children’s services were rated as ‘inadequate’ by Ofsted, said it was simplistic to say high agency usage led to poorer quality of work but the two were related.

Brazil said high caseloads had a huge impact on local authorities’ quality of practice, making it harder for social workers to ‘do good direct work with children’.

And she said it was easier for some councils to recruit permanent staff than others, depending on their location.

“The London authorities, there’s huge amounts of competition to attract the social workers. That can have an impact,” she said. “The big counties in some of the rural areas, such as Devon where I worked recently, are very difficult to recruit to.”

Brazil said sometimes high agency usage was due to a sudden surge in demand. However, she said that an inadequate rating could lower morale at a council and make it harder for them to retain permanent staff and attract new recruits. “I’ve mostly worked in local authorities that have been judged as ‘inadequate’. People have given me terms like ‘feeling devastated’ [or ‘being] hugely disappointed’. People don’t set out to do a bad job, that’s for sure.”

But she said an inadequate rating affected local authorities differently depending on how they responded to it.

“Some authorities can ride through the immediate depression, if you like, of the judgment, if there’s some good communication with frontline staff around what is the reason for it, what is the authority doing about it,” she said.

She also said that long-term permanent staff were not always better social workers and that in some cases, local authorities’ lack of awareness of the quality of their staff led to poor practice.

“Sometimes the Ofsted judgment is a real wake-up call,” she said. “I always say to people they need to do some work to really know their workforce and really get a sense of the skills and abilities and experience of their workforce. Not every authority has that knowledge.”

But she said single-worded judgments, such as Ofsted’s, only tell a “partial story” and risk “weakening the very services the inspectorate seeks to improve”.

“All too often, a poor inspection outcome triggers a predictable chain of events, including some staff leaving the authority, leading to a greater reliance on agency workers, at least in the short term whilst improvement plans are drawn up,” she said.

“That said, some local authorities do succeed in maintaining or restoring stability, despite a negative inspection outcome and many staff will stay and play their part in bringing about positive change.”

“Wellbeing and duty of care to all social workers and social care staff in the work environment is critical and that includes manageable caseloads, good quality supervision and stability and consistency within work teams,” she said.

“Rather than focusing on performance ratings, it is vital we focus on giving social workers quality time to do their job and to explore in detail reasons for variation in staff sickness levels and what can be done to reduce stress levels and high staff turnover.”

David Wilkins, senior lecturer in social work at Cardiff University, who has researched the factors driving Ofsted performance, said it was “obvious” that Ofsted ratings affected councils’ ability to recruit and retain staff.

“As such, Ofsted are in a difficult position, because they know this, but it obviously wouldn’t be right for them to inflate their ratings in order to help ‘struggling’ local authorities with their recruitment problems,” he said.

Wilkins suggested replacing the current inspection system with “regular, systematic feedback from children and families on the quality of service instead” and narrower inspections on “the extent to which the local authority is meeting its statutory duties”.

Ofsted’s national director for regulation and social care, Yvette Stanley, said the inspectorate does “appreciate the impact” its judgments have and that they are “not made lightly”.

“But it’s vital that the sector, government and wider public have a clear picture of what is happening for children, and our local authority reports provide just that,” she said.

“It’s no surprise that local authorities with lower inspection grades face issues recruiting and retaining staff – these issues are likely to have contributed to the negative inspection judgement in the first place. Lower-rated local authorities often fail to create the right environment for good social work practice to thrive, leading to higher caseloads and an unstable workforce.”

Link between deprivation and ratings

Rick Hood, senior lecturer in social work at Kingston University who has studied the impact of Ofsted inspections on performance, said highly deprived local authorities, whose budgets had been cut disproportionately in recent years, were more likely to have higher caseloads because they had fewer staff and possibly higher demand.

Analysis of inspection reports shows Ofsted has commended councils for hiring more permanent staff and reducing their use of agency workers.

“Senior managers have focused on the right things,” the inspectorate said in its recent report. “They have been decisive in recruiting a permanent and excellent set of social workers to replace the short-term and agency staff that were previously in post.”

The inspectorate commended the council, in its 2020 inspection, for the stability of its workforce and the impact this had on children.

“Children benefit from a stable social work workforce, which is highly committed and experienced. Despite this, the local authority continues to strengthen its ability to retain and attract social workers with the implementation of a new career progression and pay structure for social workers. Most staff have manageable workloads, which enables them to do meaningful social work with children.”

Ofsted noted in the council’s last full inspection in 2019 that a third of the workforce had changed since its previous inspection, with an increase in the number of newly qualified social workers. It said though there was “little use of agency and short-term staffing”, in some services “there are insufficient staff to effectively address the levels of demand”.

In a focused visit this year, the inspectorate said sickness absence and vacancies had led to variations in workers’ caseloads and that “the recruitment and retention of experienced social workers [had] been challenging”.

Meanwhile, Devon, rated ‘inadequate’ last year, plans to invest £1.1m in recruiting 100 children’s social workers, which it hopes will help it to raise its rating to “‘good’ and beyond”. In a focused visit this year, Ofsted noted that workforce stability was “still a major problem” at the council, which aims to cut its 30% agency staff rate for full-time equivalent frontline roles.