Social workers more likely to feel overwhelmed than other health and social care professionals, finds third phase of study into how practitioners are coping with Covid-19 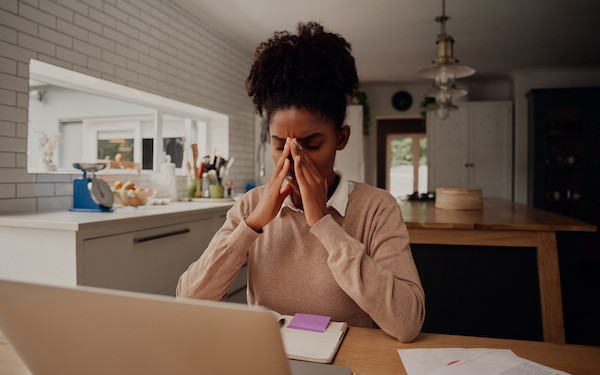 Social workers’ mental wellbeing and quality of working life have decreased over the course of the Covid-19 pandemic, a study has found.

Phase three of the Health and Social Care Workforce Study, covering May to July 2021, found social workers were more likely to feel overwhelmed, than social care workers, nurses, midwives and allied health professionals, with 69.4% reporting this.

Researchers found social workers were more likely than they were earlier in the pandemic to use substances, self-blame, vent, and disengage behaviourally as a way of coping with the pressures of work.

Social workers also reported being significantly more burnt out in the latest study than earlier in the pandemic.

The survey received 753 responses from social workers across the UK, as well as 1,968 from other professions.

Scores from the latest study were compared to those from phase two, covering November 2020 to January 2021, and phase one, from May to July 2020.

Researchers assessed respondents’ mental wellbeing using the Warwick-Edinburgh Mental Wellbeing Scale, with the average score for all respondents in phase three being 20.25.

Social workers’ mental wellbeing was lower than all other professions on average except midwifery in phase three, with a score of 19.31, which had declined compared with phases two (20.07) and one ( 21.14).

Respondents’ quality of working life was assessed using the Work-Related Quality of Life (WRQOL) Scale, with an average score of 72.45 across all professions in phase three.

Researchers found social workers’ quality of working life decreased throughout the pandemic as well, with scores of 69.92 on average in phase three, compared to 73.67 in phase two and 80.63 in phase one.

Most other professions’ quality of working life declined throughout the pandemic as well, apart from nurses, who reported an increase in phase three.

Researchers measured how respondents had coped across different phases using mean Carver coping scores and found social workers were less likely to try and accept their situation or positively reframe it as time went on.

But social workers were more likely to self-blame, vent their frustrations, disengage, and use substances to help them cope than they were earlier in the pandemic.

One of the report’s authors, Jill Manthorpe, said “a long period of stress takes its toll” and that social workers found it harder to cope in the first half of 2021 compared to earlier in the pandemic because it was no longer seen as a “short-term” emergency.

Struggling to work from home

Social workers reported struggling to do their job as effectively at home because they missed out on face-to-face contact.

“The task which is almost entirely ‘relational’ cannot be effectively done in this way. I am still expected to meet targets and keep standards within this exceptional situation,” one community social worker from Northern Ireland said.

And social workers, more than other professions, said they missed sharing their thoughts and concerns with colleagues at work after a bad day before going home. But this was likely to be because social workers were far more likely than others to work from home, with 42.2% doing so all the time.

One social worker in Scotland told researchers that working from home “negated it being my ‘safe place’ after a difficult day”.

Out of those respondents who had been redeployed during the pandemic, social workers were most likely to report that they felt unprepared.

Social workers were also most likely to have taken up employer wellbeing support while midwives were least likely to take up support.

Manthorpe, who is professor of social work at King’s College London, said assessments were a particularly difficult task for social worker to undertake remotely.

“The professional task of doing an assessment isn’t just a verbal one, it’s about seeing where people are living, how they’re managing, what their body language is and the home environment that you see on a home visit,” she said.

“Social workers value home visits as this real opportunity to talk to people but also to listen.”

Manthorpe said there were advantages and disadvantages to working from home and that social workers would likely retain an element of remote working longer term.

She said some social workers relished not having to “find a carpark or spend a massive amount of time travelling” but it was difficult for people with less ideal home office set-ups “dealing with very distressing things from [their] bedroom”.

But social workers in the study were the least likely to have Covid-19 related sickness, whereas nurses were the most likely.

Carolyn Ewart, national director of the British Association of Social Workers Northern Ireland, said it was “not surprising” that social workers reported feeling more burnt out in the study than in earlier stages of the Covid-19 pandemic.

“The increased complexity of the problems social workers are supporting people to overcome points to why they are more likely to feel overwhelmed than their healthcare colleagues,” she said.

“And, more than anything, good social work is relationship-based, so it is no surprise that social workers reported they were struggling to do their job as effectively when working from at home because of a lack of face-to-face contact.”

Ewart said governments across the UK must fund improved working conditions for social workers so staff can remain in their roles “without negative impacts on their health and mental wellbeing”.

She added that the survey also showed the “enormous pressures” experienced by social workers in Northern Ireland, where just under half of social work respondents  (315 of 753) worked.

She said these reflected demands related to increased numbers of children in the care system and the requirements of recently introduced mental capacity legislation.

The Association of Directors of Adult Social Services said the report’s findings reflected the fact that social workers “have been pushing themselves for a long time now and that this takes a personal toll”.

And a spokesperson warned that the pressures on social workers might not be easing yet despite the vaccine rollout.

“This invaluable research flags up some real concerns as we head into a winter that is unlikely to be any easier than the last one,” they said.

Manthorpe said it was important that formal support services and counselling for social workers introduced during the pandemic do not “disappear” even if work pressures ease.

“I think they now need to be there for the long haul,” she said. “The emotional impact for people who are burnt out is going to be around for a long time.”

10 Responses to Social workers’ wellbeing and quality of working life have decreased over course of pandemic, study finds