Councils across the UK will be required to take unaccompanied asylum-seeking children to end the use of hotels for those arriving in Kent.

The Home Office said today that it would make its national transfer scheme “temporarily mandatory” to ensure children arriving in the UK received the care they needed.

The hitherto voluntary scheme was relaunched in July, after Kent ceased taking in new arrivals into its care due to pressures of numbers. Since then, a regional rota has been used to widen the number of authorities taking unaccompanied children into their care.

Between July and September, 300 children arriving in the country were transferred into councils’ care, with Kent resuming taking children. However, as of mid-September, 70 children who had arrived in Kent were being housed in hotels, rather than the care of a local authority, and charities warned they were being inadequately supported.

Plan to end use of hotels

The Home Office said today it intended to end the use of hotels and that it had written to all authorities with social services responsibility in the UK, giving them legal notice to be ready to accept children into their care.

It said any decision to end the mandatory scheme would be based on numbers of unaccompanied children coming into the country and how long it took to end the use of hotels.

Responsibility ‘must be more equally shared’

Children’s minister Will Quince said: “Through the national transfer scheme, we know that many councils across the country have already stepped up to fulfil their duty to care for these children.

“But this responsibility must be more equally shared between councils, which is why we will be mandating temporary transfers where appropriate, so that these children can access the support services they need and become successful members of their local communities.”

The Association of Directors of Children’s Services (ADCS) said it recognised the “importance of everyone playing their part in addressing this national crisis”.

However, ADCS president Charlotte Ramsden added that mandating the scheme was not “a complete solution to the many pressing and longstanding issues we have been raising with the government for some time”.

The Home Office introduced its NTS in 2016, based on the principle that no council should be asked to look after more unaccompanied children than 0.07% of its child population.

But in practice, most asylum-seeking children in England have remained in London and the South East – 52% as of March 2021, a similar proportion to the previous three years.

Kent and Croydon have been the only authorities in England caring for more than 200 asylum-seeking children in each of the last four years. This reflects Kent being a major port of entry and Croydon being where a Home Office asylum intake unit is based.

The situation has seen Kent stop taking asylum-seeking children into its care twice in 2020 and 2021, and Croydon’s level of unaccompanied children implicated in its significant financial problems.

Kent also threatened legal action against the Home Office earlier this year if it refused to make the NTS mandatory.

The Home Office sought to tackle the concentration of asylum-seeking children in a few authorities by its relaunch of the NTS in July this year. This involved extra financial support for volunteering councils and a rota system to arrange placements. However, the Home Office resisted calls to make the scheme mandatory. 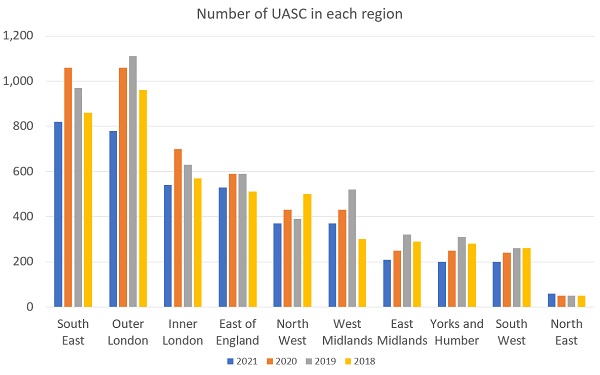 Both Kent and Croydon have now welcomed the Home Office’s decision to temporarily compel all councils to take asylum-seeking children.

Kent said that it had accepted 247 asylum-seeking children and transferred 150 to placements volunteered by other local authorities since it resumed services in September, at which point it was already caring for 309 children.

“Our services have consistently remained under extreme pressure and as offers of transfers have continuously not kept pace with new arrivals, government have had to rely on accommodation in hotels which has furthered compelled the decision to mandate the NTS,” said council leader Roger Gough and cabinet member for children’s services Sue Chandler in a joint statement.

“It has always been our belief that a mandatory NTS is the only fair way to ensure a sustainable national solution to the equitable distribution of unaccompanied asylum-seeking children across the country and an end to the unfair burden on Kent’s residents and services solely due to our geographical position,” they said.

“All councils should share our important national duty to care for children and young people who could not be more vulnerable. But that must be backed with government funding which covers the full cost of support,” said council leader Hamida Ali.

“For years Croydon has been caring for more unaccompanied children than almost anywhere in the country. Compassionate councils who rightly play their part in what is a national effort should be supported with full funding not financially penalised.

The Home Office has not published a list of which councils voluntarily signed up to its national transfer scheme (NTS), but the Local Government Association (LGA) said most councils in England and Wales had already offered homes and support to asylum-seeking children.

“Councils continue to face challenges in finding appropriate homes, with ongoing issues around centrally-led age assessment and delays in decision-making adding uncertainty for both councils and young people,” said James Jamieson, chairman of the LGA.

“These new arrangements must continue to swiftly take into account existing pressures in local areas, with greater join up across government to improve engagement with councils on all the programmes that support new arrivals to start new lives in the UK.”

On Monday, home secretary Priti Patel said in the House of Commons that just one local authority in Scotland had signed up to the voluntary NTS.

The Convention of Scottish Local Authorities (COSLA) said there was “no funding in place for local statutory services to support people seeking asylum”.

“Unfortunately, the current scale of hotel use across the UK is a direct consequence of the approach that the UK government has chosen to take,” said Kelly Parry, COSLA’s community wellbeing spokesperson.

“I have written to the home secretary seeking urgent dialogue on the role that Scottish councils can play in ensuring that asylum seekers are appropriately accommodated and supported.” 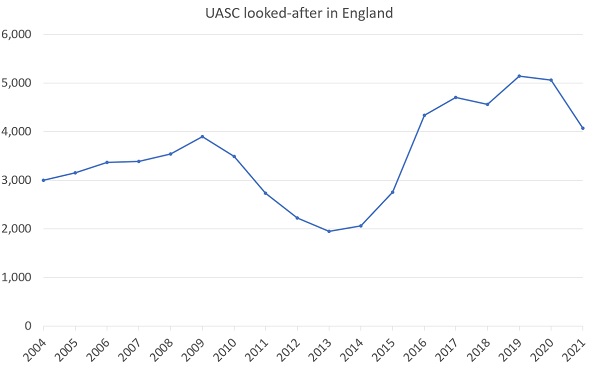 Despite the increasing pressures on councils like Kent and Croydon and the Home Office’s recent use of hotels, the overall number of asylum-seeking children in care has declined in the past two years.

The number in England is lower than when the Home Office introduced the NTS in 2016, with 4,070 children in the care of local authorities as of March 2021, compared to 4,340 five years earlier.

Numbers fell by 20% in 2020-21, likely linked to a 15% drop in the number of children arriving in the UK and claiming asylum during the same period.

Enver Solomon, chief executive of the Refugee Council, said: “Making it mandatory for local authorities to take part in the national transfer scheme should reduce delays in children getting the care and support they need which is a very welcome move.”

6 Responses to Councils across UK required to take unaccompanied children