Social Worker of the Year: ‘As social workers, we promote social justice’

Vivian Okeze-Tirado discusses her shock at winning this year’s award, challenges as a fostering social worker, and her work to tackle racism

By Rob Preston on December 22, 2021 in Children, Social work leaders 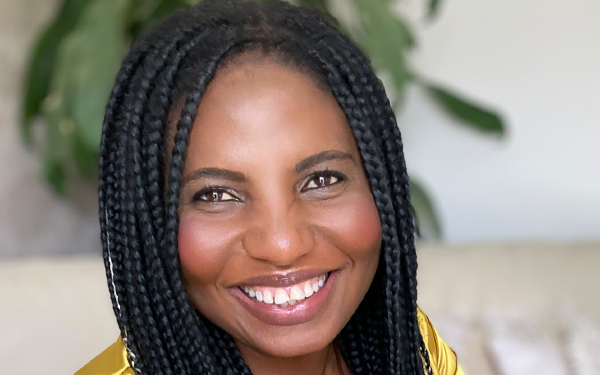 Vivian Okeze-Tirado, overall winner at the 2021 Social Worker of the Year Awards

Advanced fostering practitioner Vivian Okeze-Tirado was working at home when she was crowned overall winner at this year’s Social Worker of the Year Awards.

She had been handed the social justice advocate award earlier in the ceremony for her work creating diversity workshops for foster carers and social work colleagues following George Floyd’s murder in May last year.

Okeze-Tirado was “shocked” to win the first award because she was up against five other “top contenders”.

At home with her son and husband, she had the ceremony playing on one laptop while working on another.

When the hosts introduced the overall winner, Okeze-Tirado had no idea they were describing her until they read out her name.

“At that point I just fell on the floor and started screaming with joy,” she said.

Okeze-Tirado and her family moved from Ireland, where she had worked in the banking sector, to West Sussex 12 years ago.

She considered continuing with her former career but had a change of heart after volunteering at her local children and family centre.

“I remember chatting with some teenage mums and I just felt there was something in me that wanted to reach out to them,” she said.

She already had an undergraduate and master’s degree in business administration but spoke to local universities about entry requirements for social work courses.

To gain necessary experience, she got a paid job at a children and family centre, where she worked for a year and a half before enrolling at the University of Brighton.

Okeze-Tirado said she enjoyed her time in Brighton but did not think there was enough diversity within her course, which she said “had an impact on my learning”.

After graduating, she joined West Sussex council’s fostering team, where she has been for the past seven years.

Despite inheriting a sizeable workload, Okeze-Tirado “enjoyed the role from the very beginning”, and said she “threw [herself] into work”.

“I didn’t just come in to tick boxes or to get paid,” she said. “I came in to make positive change.”

As a fostering social worker, Okeze-Tirado matches the needs of children in the council’s care with appropriate foster carers before doing “everything” to keep prevent placements from collapsing.

In some cases, she said, it can be “difficult to get that partnership working between the foster carer and the child’s social worker”, with fostering practitioners like Okeze-Tirado caught “in the middle like the referee”.

Ofsted rated West Sussex as ‘inadequate’ at its most recent full inspection in 2019, citing “significant staff turnover” as one contributing factor.

Okeze-Tirado said she was proud to have been a “consistent figure” for foster carers over the past seven and a half years, during which time she has also stepped in where there’s been a gap in the child’s social worker.

One of Okeze-Tirado’s first referrals was a 12-year-old boy who had suffered a bereavement and needed a foster placement.

She persuaded a foster carer who had specified that they did not want to take a child over 11 years old to make an exception for the boy. They too had suffered the loss of close family member, and Okeze-Tirado thought they would be an ideal match.

The foster carer agreed but when the placement started was shocked when she realised Okeze-Tirado had only read about the child’s situation, assuming she had met him by how highly she had spoken of him.

But the placement was such a success that the foster carer eventually became the child’s special guardian – and he went on to become a head boy of his school.

Okeze-Tirado stayed in touch and said every time she was told of the boy’s achievements throughout his school and college career, “it was like hearing news about my child”.

“I am happy to say I had coffee last week with the foster carer [now special guardian], where she was updating me on where he is at. He is doing well. He is about 20 now. He has finished college,” she said.

Time for social workers to act against racism

After George Floyd’s murder at the hands of police officer Derek Chauvin, in Minneapolis last May, Okeze-Tirado wrote an open letter expressing her outrage at the “crime against humanity” and calling for action.

“I didn’t want to keep silent, because as social workers we promote social justice and social change,” she said.

She shared the letter with one of her managers, Jill Seeney, and together they thought about a progressive way to utilise it and an acrostic poem she had written called ‘Diversity’.

“We felt that some of our children’s self-esteem had dwindled very low because of George Floyd. So we decided to start the workshop,” she said.

The workshop, initially for foster carers, explored use of the ‘secure base model’, developed by Professor Gillian Schofield and Dr Mary Beek, alongside a discussion about the Black Lives Matter protests taking place across the world and diversity more generally.

Okeze-Tirado said having the support of her manager, a white British woman, was helpful and enabled the workshops to be better received initially.

“If it was just me bringing that model, I’m not sure that people would have engaged as such,” she said.

“But in having an ally that was white British and the two of us standing side to side, [that] was encouraging so that people could see it is not just me speaking about my experiences.”

Okeze-Tirado does now present most workshops by herself, speaking at Brighton children’s services anti-racism day and delivering a talk at the University of Chichester recently.

She said it is challenging for her to juggle the talks alongside her workload and that she sometimes does not know how she finds “the time or the strength or the energy to do it”.

“The only thing that drives me is passion to impart that knowledge. Especially when people are interested in acquiring the knowledge,” she said.

She encouraged West Sussex to hire its first equality, diversity and inclusion officer across the council, as well as advocating for the creation of a role similar to that carried out by Millie Kerr, the an anti-racist lead practitioner at Brighton’s children’s services. “In terms of doing the practical jobs that I’m doing right now, I think there is still a gap,” she said.

Okeze-Tirado also had a book published this year expanding on her acrostic poem with practical steps for social workers, foster carers, and other individuals seeking knowledge about diversity and cultural competence.

“I call it a book of solutions, really. We are not just going to talk about problems in society. My slogan is, ‘Let’s not just talk about racism, let’s do something about it’,” she said.

4 Responses to Social Worker of the Year: ‘As social workers, we promote social justice’