Glen Garrod told delegates at NCASC that some areas of the country had reached ‘tipping point’, leaving more people without ‘the support they need’ 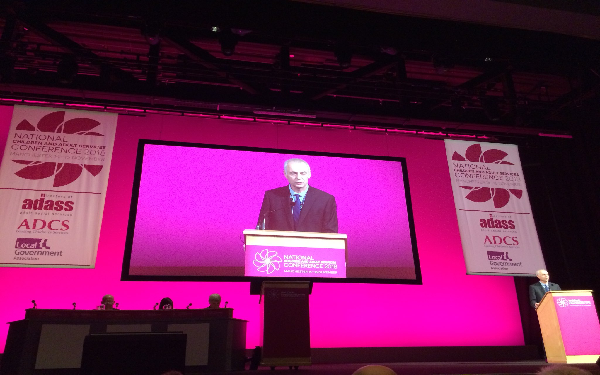 Austerity has “gone too far” and is weakening the “availability and quality” of social care services, the Association of Directors of Adult Social Services (ADASS) has warned.

Speaking at the National Children and Adults Services Conference (NCASC) in Manchester, ADASS president Glen Garrod said cuts to social care funding had led to a decline in services and a reduction in standards, despite a show of “remarkable resilience” from care providers.

Garrod emphasised the social care market was looking “increasingly fragile” and insisted some areas of the country had already “reached their tipping point”.

“Both big and small-scale providers are clearly distressed and whilst many continue to survive, how many are thriving – too few. This is not a buoyant market,” Garrod said.

The consequences of this deterioration on individuals and their families was not yet “sufficiently well understood”, according to Garrod, who said in excess of 1.4 million people were struggling without help from councils.

“I worry that more people will lack the support they need, leading to a more rapid deterioration in their ability to stay independent, retain social contacts, contribute to society and feel good about life.”

Asking delegates to “challenge the shortfalls in the system”, he made reference to the upcoming green paper on adult social care as a crucial catalyst for change: “We have a watershed moment, a chance to change the legacy that has been left to us with a better one,” he said.

A need to concentrate on all areas

Garrod continued to say attention given to delayed transfers of care in previous months had “come at the expense” of better support in the community, which he said had resulted in more people entering and remaining “unnecessarily” in residential care.

He reminded delegates that a “collective endeavour” from all the departments, including health and housing, would be needed to improve care, emphasising special focus on one area “should not be at the expense” of another.

On the subject of each department receiving equal attention from the government, Garrod said social care continued to remain “too much of an enigma” to the public, with efforts of the 1.5 million social care workforces going “unheard and poorly rewarded”.

“Our ability to connect people with communities – to act as community connectors is not given sufficient prominence in such a limited role. Our credibility, our contribution to social justice, our story is increasingly being seen through the prism of the NHS.

“Unless we continue to build a stronger case for the public pound… then we will remain consigned to arguing for funding for the wrong reasons and from the side-lines.”

Young children not routinely told why they are in care, survey finds
Sign up to receive Community Care content in your inbox