The Dudley scams unit are cracking down on financial scammers and rogue traders with a new multi-agency approach, involving trading standards, police, social services and the fire service.

By Charlotte Carter on November 6, 2019 in Adults 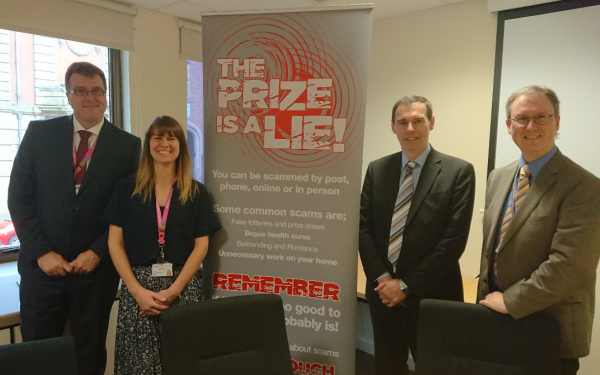 Socially isolated, living alone in a high-rise block of flats with the electricity cut off, self-harming and relying on food banks to survive – this was the reality for a 30-year-old woman with learning disabilities in Dudley, who fell victim to a romance scam.

Described by Dudley trading standards scams liaison officer Kelly Grandison as a vulnerable adult, the woman who has learning disabilities fell victim to a romance scam.

“When we first came into contact with her she thought she was in a relationship with someone and had been with someone for 18 months – she was being treated like she had a boyfriend, when it was more than likely a group of people somewhere that were contacting her,” says Dudley trading standards scams liaison officer Kelly Grandison.

The woman was sending her every last pound to the scammers, who made contact with her over social media, believing the money was going to her ‘boyfriend’.

“She was heavily reliant on the boyfriend, or rather the scammers, emotionally and psychologically, and she was self-neglecting and self-harming, which we worked out had begun when the woman had begun interacting with ‘him’.”

A safeguarding enquiry ensued. Section 42 of the Care Act 2014 places duties on local authorities to make enquiries when they have reasonable cause to suspect that a person with care and support needs is experiencing or at risk of abuse and neglect and is unable to protect themselves because of their needs. The same section makes clear that scams are a form of ‘financial abuse’.

However, the situation was difficult to navigate because of the need for professionals to respect the woman’s right to make decisions she had the capacity to make, even if practitioners didn’t think they were right, says Grandison.

“Though people were concerned, she had the right to make an unwise decision. It’s not up to the authorities to decide whether this is a good relationship or not,” Grandison adds.

Last Christmas, the scammer said they’d be moving in with her, giving her a date they’d be arriving in the UK.

“She got a taxi and went to the airport to meet ‘him’ and someone with social services went with her.

Grandison said eventually the woman began to accept he wasn’t her boyfriend,

“It was difficult because we took on the role of bad news bearers if you like; we needed her to understand this person and relationship were not real that in order to get her to move forward.”
The woman was eventually moved to a new address where she was safer and then encouraged to join groups to remove her reliance on the scam.

“We didn’t get the money back, but we got her independence back and we were able to turn her life around so that it was a million times better.

“When she was still in contact with the scammers she was constantly calling emergency services and self-harming; that all began to stop,” Grandison adds.

The woman is just one of hundreds of scam victims Grandison and the Dudley Council trading standards’ scams unit have supported since they began a campaign in 2017 against financial crime.

The Dudley scams unit is a small team, made up of three officers who are integrated into the existing trading standards team.

The unit is managed by a principal trading standards officer, Chris King, who has experience of investigation and prosecution of doorstep criminals and scammers.

A new approach to scams

When Dudley Council was awarded £13.9m over three years in 2017 through the government’s Improved Better Care Fund (IBCF), a small part of this was used to create a dedicated scams unit to tackle the work of financial criminals who target vulnerable and isolated people.

The IBCF funding was designed, in part, to alleviate pressure on the NHS. Using it for this purpose involved making a business case using research that showed that victims of financial crime were more likely than those who weren’t scammed to call emergency services, be admitted to hospital or visit the GP.

The funding they received was used to set up a financial hotline, manned by a member of the scams team.

Financial institutions in the borough have been encouraged to use the hotline when something seems amiss or somebody wants to withdraw or transfer a large amount of money.

The extra funding was also used to fund call blockers, which come preloaded with thousands of numbers known to have been used by scammers and automatically blocks them while allowing calls from family, friends and other authorised numbers through. These have proven to be particularly effective in cases where the victim has dementia.

Grandison cites a case the team learned of from the hotline via a bank.

“It was an elderly man with dementia who had fallen victim to a long-lost relative scam. The scammers told him he was due £10,000,000 but for insurance purposes he had to deposit £21,000 into an account.

“He found it very difficult to accept at first and these scammers were contacting him daily. He’s in his 80s, he’s got dementia, he’s very isolated and lost his sister not that long ago,” she says.

At first the man didn’t engage; then, after a safeguarding referral was made, a call blocker was made available to him. 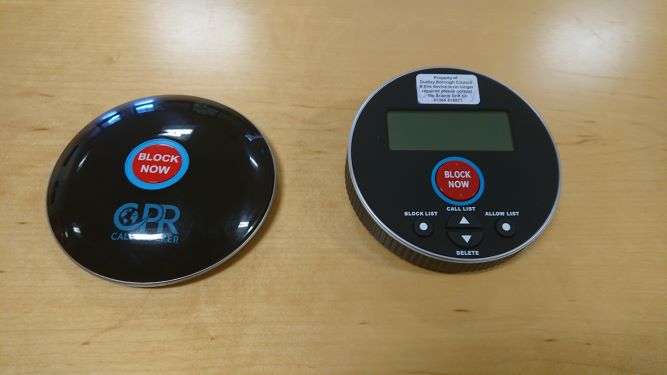 Examples of the call blockers the Dudley scams unit are loaning out to residents.

“We always look at what other support we could offer – we gave him groups to join but he wasn’t interested.”

Grandison said initially the man didn’t want the call blocker installed, fearing the loss of contact with the scammers, but he eventually agreed to it.

“But then he wanted it taken away, because he had withdrawals from the scammer, we said it wasn’t a good idea but we had to take it out because that was his choice,” Grandison says.

“There are a lot of people who miss the contact with the scammers, where there’s been a lengthy engagement over several months and they get the call blocker, all of a sudden the phone calls stop.

“They want to go back to where they were, they’d rather have the contact,” he says.

To date, the team has fitted 67 call blockers in Dudley resident’s homes.

Bowsher says the political vision was to make Dudley a ‘no-go zone’ for scammers and rogue traders.

“If you make your money out of exploiting vulnerable people, you don’t want to come here because it won’t work,” he says.

‘This is something social care doesn’t typically do’

In order to fulfill that vision, the scams unit took the Improved Better Care Fund investment and decided to do something properly preventive, Bowsher adds, because “to stop this getting worse we have to stop it from happening to somebody in the first place”.

He says the big aspiration was having a mixed range of people involved including trading standards, police, social services and the fire service.

“This is something that social care doesn’t typically do but the team are out and about, meeting people, organising safeguarding.

“All the training materials about being scam aware we made available to the workforce, we encouraged all council members to sign up as SCAMbassadors [people who use their influence to raise the profile of scams]. We also did a lot of work with safeguarding to make sure people know what constitutes financial abuse,” Bowsher says.

“All of these things happen in a shade of grey; often the systems are dealing with the consequences but not stopping it. But with our approach we’re seeing prosecutions, we’re seeing money go back to people and real tangible results.”

Not sure if you have access to Inform Adults through your organisation or have other questions? Find help here.