By Alice Blackwell on December 6, 2019 in Children, Workforce 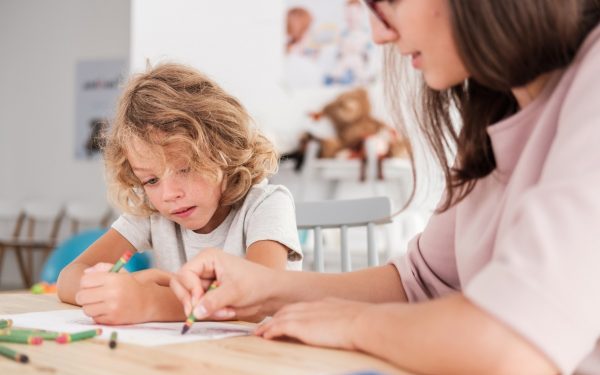 Social work is about making a real difference to people’s lives, which many practitioners and experts feel comes chiefly through building positive relationships with individuals and families. However, many practitioners’ working lives are dominated by case recording, compliance and the need to have decisions signed off by layers of management.

While the need to unlock more of practitioners’ time to enable them to build relationships is well known, achieving this has been harder, particularly against the backdrop of austerity and risk-averse cultures often incubated by high-profile cases.

Last month, the latest solution to this problem – A Blueprint for Children’s Social Care – was published by fast-track training provider Frontline, think-tank the Centre for Public Impact (CPI) and care organisation Buurtzorg Britain and Ireland.

Their paper proposed a model that it says would give social workers a 60% increase in ‘face-to-face time’ with children and families and a 20% reduction in caseloads, while also improving quality assurance through a 50% increase in group supervision. All of this would be achieved within existing budgets, legislative frameworks, inspection regimes and reporting requirements to government.

The blueprint takes inspiration from The Buurtzorg model of care, launched in the home care sector in the Netherlands in 2006, under which teams of nurses are given significant autonomy to organise their work and support service users. At the blueprint’s heart is the creation within local authorities of small ‘self-managing’ teams, with no team manager function, providing social workers with substantial professional autonomy.

Over 80 social workers and leaders contributed to the blueprint, and the three organisations behind it partnered with one local authority – which is being kept anonymous – to examine how feasible it would be to transition from the current model to the proposed one and used the existing council’s system as a case study. It was this that resulted in the claims about its impact on caseloads and contact time. The next step for the proponents of the model is to have a real-life pilot of the blueprint.

However, while it has attracted understandable interest and enthusiasm, the proposal has also sparked controversy, amid concerns about it opening up more private sector involvement in social work and in relation to the motivations of the organisations behind it.

How will the model work? 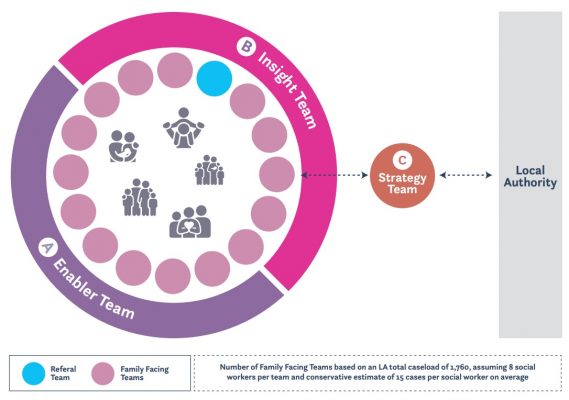 Family facing teams would have “near total decision-making power” over their cases, rather than have to refer them to managers, and would work with families from initial referral through all categories of risk to ensure continuity of support. They would also be fully accountable for use of their budget and the allocation of cases between team members.

As outlined in the diagram above, the model provides a structure around these teams to enable them to do their best work, rather than replicate current management hierarchies. This includes an ‘enabler team’ which would handle administration for the family facing teams, help with training, recruitment and IT and conduct performance analysis. An ‘insight team’, consisting of experienced practitioners such as current principal social workers and independent reviewing officers, as well as legal experts, would provide coaching and specialist expertise on cases when needed.

Accountability would be provided within the family facing teams by strong peer support and extensive peer supervision, but they would also be overseen, on a light-touch basis, by a ‘strategy team’ – the equivalent of today’s senior management. While its role would be to create a culture that enabled family facing teams to flourish, they would be required to get involved in cases above a financial threshold or those that most affect families. The boundaries of the strategy team’s involvement in family facing teams’ business would be set out in ‘team agreements’, ideally drawn up in partnership with the frontline teams.

‘Potential for social work to be turned upside down’

The model has had a positive, if cautious, welcome from parts of the social work sector.

Kathy Evans, chief executive of Children England, says she is “excited at the potential for social work to be really turned upside down and to learn from Buurtzorg, because it’s closer to the true nature of what the aspirations of social work should be”.

In a statement, British Association of Social Workers chief executive Ruth Allen said that the association was not endorsing the blueprint, but was “supporting the principles around relationship-based practice and increased autonomy for social workers”.

She added: “The value of this is that it opens up a debate, which is really helpful.” The aims of the model also chime with BASW’s current 80-20 campaign which aims to reverse the situation for many social workers of spending 80% of time on administrative tasks and 20% with service users, to promote relationship-based practice.

However, commentators have also raised concerns about the practicalities about implementing the blueprint.

Evans suggests that the wider council would need a culture change for a model like this to be implemented and that it would need to be local authority-wide, not just within social care.

“Trying the Buurtzorg model with children’s social work in isolation from the rest of the system is very unlikely to set social work practice free in the way that is hoped.

“If the wider council hasn’t had a culture change, and also if the wider network of services remains commissioned and managed on high targets and specialisms, then having a freed up social work team might not have the benefits that are hoped.”

‘Trying to squeeze something radical into an old system’

Concerns have also been raised about the blueprint’s compatibility with existing IT systems within local authorities.

At the model’s launch, Anna Bacchoo, head of practice at What Works for Children’s Social Care, said that “existing systems would not work with this model… without [improved systems] I think the model could potentially be undermined”.

Evans also commented at the launch that it would be like “trying to squeeze something radical into an old system”.

Ryan Wise, practice development manager at the Social Care Institute of Excellence, who contributed to the blueprint, says updated IT systems would definitely help but that “[the model] working is not dependent on a fully-fledged new IT system”.

Aside from the practical concerns, deeper anxieties have also been voiced about the model from some social workers. At the blueprint’s launch event, there were many questions from practitioners in the audience about how it would affect them: newly qualified social workers concerned about career progression and managers questioning how their roles might change and if this would affect their pay. Some suggested that the model could see ‘natural hierarchies’ being formed within self-managing teams.

There has been some concern and confusion over the model’s structure with some questioning on Twitter whether the diagram above meant that the model involved local authorities outsourcing social work services to external agencies.

Wise responded to these concerns on Twitter by saying “[the model] is creating a flatter hierarchy within a local authority, not out of it”, but acknowledges how the diagram could be interpreted in that way.

Evans adds that there’s nothing in the model which signals an outsourcing risk to her: “This to me looks like no outsourcing angle at all, it looks to me like it’s finally focusing on how people do their work”.

There have also been wider concerns expressed by social workers and academics on Twitter about American consultancy firm Boston Consulting Group’s (BCG) involvement in the development of the model and in UK social work. BCG founded the Centre For Public Impact and has provided pro bono support for the blueprint project as well as pro bono strategy support to Frontline, on whose board of trustees it has a member. 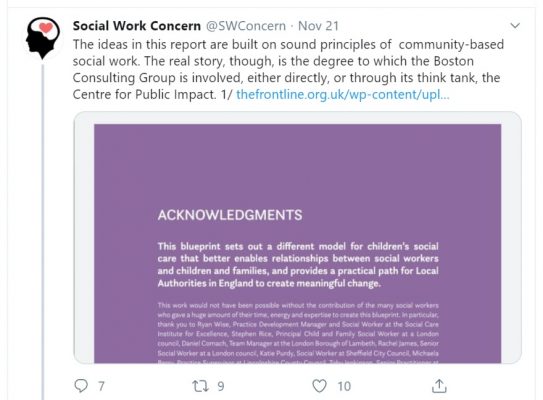 These concerns related to the potential for the company to exert undue and negative influence over government and local authorities, in a way that ran contrary to the values of social work, through ostensibly charitable work in the name of improving the profession.

“So, while BCG provided expertise in organisational design for the blueprint, the effort was led by Frontline as the experts in children’s social care, CPI as the experts in the applications of shared power in government and Buurtzorg Britain and Ireland,” she adds.

Evans says that her concerns are less about the organisations involved and more about a real risk of it becoming a ‘new consultancy pitch’ sold to local authorities to transform children’s social care in a one-size-fits-all way.

“You have to grow your own version of good and that’s what’s at the heart of the Buurtzorg model so it is not a replicable model, it’s a philosophy to be grown from the roots up and that’s the risk of it being viewed as a pilotable consultancy solution.”

In the middle of an election campaign – in which social work is conspicuous by its absence in the debate – it is hard to know whether the new government will pick up and promote the model. In theory, given the assumptions that the model is compatible with local authorities’ existing statutory duties and reporting requirements, councils should be able to pilot the model without Department for Education approval. But given the radical nature of the change it envisages, some government support is likely to be needed.

In its conclusion, the authors of the blueprint say: “A transition to this model will be highly challenging, and a significant mindset shift will be needed to put it into practice. However, the benefits will secure better outcomes for children and families, while also addressing longer-term morale and staff retention issues. This blueprint offers a brave way of doing things differently and has demonstrated that the system doesn’t need to wait around for change to happen. It is the hope that LAs, groups of social workers and the DfE can find ways of creating the space to give this a go.”

Sometime next year we should find out whether this will be the case.

An online webinar by the Social Care Institute for Excellence (SCIE) will be taking place on 15 January 2020. SCIE and CPI will explain the workings of the blueprint and look at empowering social workers and placing relationships at the heart of children’s practice. Find out more and register for free here.

Employers should proactively help ASYE social workers manage workloads, says annual report
Social work cartoon: ‘Retirement’
Before they can be independent, we need to give children in care opportunities to be interdependent