‘For some fleeing Ukraine, the trauma will never end’ 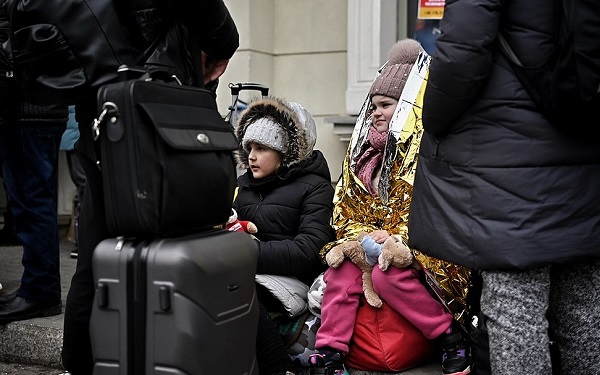 Practitioners must recognise that some refugees fleeing Ukraine will be traumatised for the rest of their lives, a social work professor has warned.

But they have a key role to play in ensuring refugees fleeing to the UK feel welcome, which can mitigate the trauma they have gone through, says Lena Dominelli, chair of British Association of Social Workers’ ‘Social Work’s Place in Emergencies and Disasters’ special interest group.

Since the Russian government invaded Ukraine on 24 February, Dominelli has been in contact with practitioners on the front line.

She speaks twice a week to social workers in Ukraine, “in the bunkers during the night and during the day when the sirens sound”, to listen to their information and offer advice.

Social workers are helping people on the ground, from trying to reunite children and families, to providing practical aid like food, water, clothing, shelter where they can.”

Dominelli says social workers in Ukraine ask for advice on policies that have been implemented in other countries in response to disasters to help the social work response.

She says social workers will be involved from the current immediate relief process through recovery, when the military threat has ended, then onto the longer-term process of reconstruction of the country’s infrastructure.

To support practitioners in Ukraine, Dominelli has helped to set up the Social Work for Peace network, which is asking for donations to purchase food, clothing, water, shelter, medicines, painkillers, oxygen and power generators, through various humanitarian organisations.

The network – based in Stirling, the university where Dominelli works – aims to help frontline practitioners refer people affected by the war to other services and assist those demanding an end to the war through their elected representatives.

It also pledges to prepare other countries to welcome Ukrainian refugees, assist those that have fled to settle down in their host country, secure scholarships for students from Ukraine, and recruit bilingual speakers who speak Ukrainian.

This is one of several actions global social work is taking to support those affected by Russian’s invasion.

The International Federation of Social Workers said last week it had co-ordinated professionals and communities across Europe in responding to the needs of refugees as they fled Ukraine as well as assisting people who remained in the country.

“These collective actions are unprecedented in the life of IFSW and show the growth and the strength of our development,” said Rory Truell, IFSW secretary-general.

Social work organisations and others in the UK have urged the government to offer support to Ukraine refugees with Social Workers Without Borders calling for it to “enact [its] duty under the UN 1951 Convention to protect all refugees”.

The government responded to public pressure by announcing a scheme to house Ukrainian refugees this week, with no cap on numbers.

‘Homes for Ukraine’ will allow individuals, charities, community groups and businesses in the UK to offer those fleeing the conflict a place to stay with over 90,000 households expressing an interest in the first 24 hours.

The charity Refugees at Home is recruiting voluntary home visitors in London, including those with social work experience, to assess potential hosts and ensure placements are safe and suitable.

Dominelli says a crucial part of social workers’ role in the UK is to ensure Ukrainian refugees arriving in the country feel welcome.

“We have to respond to their needs, make them feel very welcome and that they are not a burden to society, that actually society has a commitment to them and their wellbeing,” she says.

Social workers may have to think “creatively,” she says, about how to access the additional resources that Ukrainian refugees might need.

For instance, Dominelli says it is important for social workers to work with Ukrainian communities that are already in the UK. She has been talking to Ukrainian groups in Edinburgh about how she and others in Stirling can prepare.

She says some people may have “legitimate worries” about struggling to feed their own family and might ask, ‘why are you telling me that you can give them something, but you are not giving me something?’.

She adds: “And I say it is not an either or: we can look after your needs and their needs too because we are one of the richest countries in the world.”

In terms of practical tips, Dominelli says it is worthwhile for social workers in the UK to learn some basic Ukrainian such as, ‘hello, how are you?’.

Dominelli’s father, a linguist, advised her that you only needed to learn 200 word to speak basically in a language.

Trauma can last for years

Dominelli says the longer-term support that Ukrainian victims of war will require will depend on each person – but some will be traumatised for many years, she warns.

“I know the (government) is being very optimistic and thinking three years but from the trauma side people may never get over it,” she says.

“They can survive where they are contributing to society, they are getting on raising their families, going to work, doing whatever they need to do, but they are not really happy, they don’t feel fulfilled because they are always getting flashbacks.”

Dominelli says the difference could be the extent to which Ukrainian refugees are welcomed into the UK to give them a sense of belonging.

“A lot of this has to do with the way they are accepted in their society, whether they feel they belong to that society even if it’s a new one that they are having to adjust and adapt to,” she says.

“If they can get those very fundamental human needs met, they are the ones who will go on to thrive.”

Working through Covid: how is it affecting your wellbeing?
£80m for Frontline-style training scheme not value for money, warns BASW
Stable social work management crucial to improvements at ‘inadequate’ council, says DCS

3 Responses to ‘For some fleeing Ukraine, the trauma will never end’