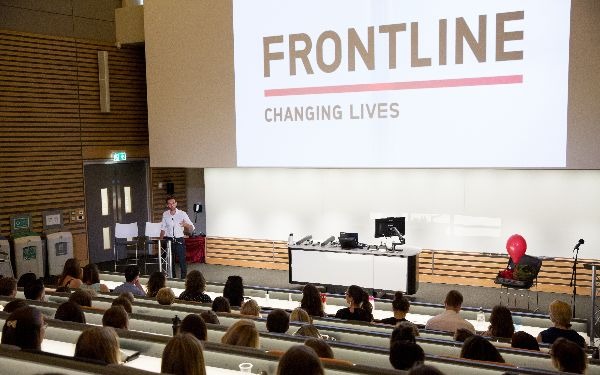 A lecture given to Frontline students in 2018 (Photo: Frontline)

An £80m proposed contract for a Frontline-style social work training scheme does not constitute value for money, the British Association of Social Workers (BASW) England has warned.

Before the contract is tendered for, the government should carry out an assessment of the impact on outcomes for children, families and adults, workforce retention and equalities of different qualifying routes into the profession, said BASW England.

The association’s concerns, which were backed by university social work leaders, follows the launch, in December 2021, of a Department for Education consultation with potential providers for the contract to train four cohorts of social workers from 2024 onwards.

BASW England said it supported a diversity of routes into social work but the evidence did not support this level of investment into one qualifying route.

“Value for money and quality assurance must underpin all decision making about the use of public money,” said the association “At a time when recruiting and retaining excellent social workers is a key challenge, investing so heavily in a training scheme about which there is little evidence for improved retention, systemic change or better outcomes for children and families does not meet these principles.”

It cited DfE-commissioned research published in December into retention and progression among trainees on both Frontline – whose students take just over a year to qualify – and the 14-month Step Up to Social Work course.

This found they were no more likely to leave children’s social work within 18 months of qualifying than graduates from other routes. However, BASW England highlighted the report’s observation of a ‘disconnect’ that Frontline graduates reported between their training and experience of working in a local authority, a finding the association said was “significant” and needed addressing.

BASW England also raised concerns about the inequality in government funding between routes that “ostensibly have the same aim…to educate the future workforce”.

A key reason for this disparity is the much more generous financial support given to Frontline and Step Up students – along with those on mental health fast-track course Think Ahead – compared with HEI counterparts.

BASW England said this raised equalities concerns, as did concerns that Frontline’s intake was not sufficiently diverse and “excluded” people with lived experiences of social work or from poorer backgrounds. This was based on a 2017 study comparing the characteristics of Frontline trainees with those who enrolled in mainstream courses in 2013-14.

Given the much greater financial support provided for fast-track students, the association warned that the proposed expansion in such training would reduce applications to- and directly threaten – courses in research-orientated universities, potentially weakening social work’s research base.

Before proceeding with the contract, BASW England said the DfE must carry out a full consultation and equality and impact assessments on all routes into social work, involving all education providers and social work employers.

Earlier this year, the DfE extended this for a further year, enabling Frontline to train a cohort starting this summer, and the department is also considering extending the contract for one more year.

The DfE said the new contract – for a fast-track programme to train students to become children and families’ social workers – would replace the provision currently offered by Frontline and commence in 2024, running for four cohorts.

Neither the £80m funding, nor the details of the proposed programme, are confirmed at this stage. Potential providers have until 9 May to express interest in the contract.

Universities ‘losing out on students and placements’

BASW England’s concerns follow warnings from university academics body the Joint University Council Social Work Education Committee (JUCSWEC) that HEIs were losing out on students and placements to fast-track courses because of their superior funding.

This was in response to a Social Work England report that found that half of education providers missed their student intake target for 2021-22, and a similar proportion reported struggling to find placements for their students.

It said HEI students faced significant  financial struggles because of their lack of financial support compared with fast-track counterparts.

“University students are often forced to take on additional jobs, even during full-time placements,” said JUCSWEC.

“This would not necessarily be the case for students on more generously funded routes who therefore have more time available to study.”

“The impact of HEI students not receiving the same level of bursaries as fast-track is that many work must work multiple jobs while studying,” she said.

“The ethnic breakdown of my class is around 60% being black. Of that, there is a proportion of black female students who are having to work two, three and sometimes four extra jobs,” she added.

Sometimes her students are working night shifts to get by, “causing them to make decisions day in and day out about whether they can afford the course,” she said.

Juggling a full-time education alongside work had left her students “feeling burnt out by the time they finish the course,” said Bald.

In relation to securing placements, Bald endorsed JUCSWEC’s view that “Frontline students are at the front of the queue, especially when it comes to children’s placements”.

This was “frustrating” because, under ’s education and training standards, all qualifying courses are obliged to give students contrasting placements in at least two different settings.

Bald said that if fast-track courses were supposed to increase the number of practitioners going into children’s services, it was “perverse” that they were “blocking out the number of student placements” in children’s teams.

In response to the concerns, Frontline agreed that multiple routes into the social work profession was the “most desirable approach to ensure that there are enough social workers improving outcomes for children and families,” said Lisa Hackett, its chief social worker.

She added: “The Frontline programme is embedded in theory, while participants also learn in practice in a local authority setting, which ensures they are best prepared for a role in child protection social work.”

Frontline said that it was working to increase the diversity of its intake – with a focus on encouraging more men and people from black and ethnic minority communities – onto the programme.

For its 2020 cohort, 22% of students identified as black, Asian or from an ethnic minority, an increase on previous cohorts, though is well below the 36% recorded by postgraduate and undergraduate HEI courses in recent intakes.

Frontline also pointed out that the 2016 DfE-commissioned report that cited the disparities in government funding for different routes also showed that the total cost to the economy was much higher for undergraduate courses than for masters or fast-track courses. This was because of the former’s three-year length – meaning it takes graduates longer to join the workforce – and higher tuition fees.

Regulator introduces higher standards for social work education providers
From refugee to asylum campaigner to Children’s Commissioner
‘For some fleeing Ukraine, the trauma will never end’

2 Responses to £80m for Frontline-style training scheme not value for money, warns BASW