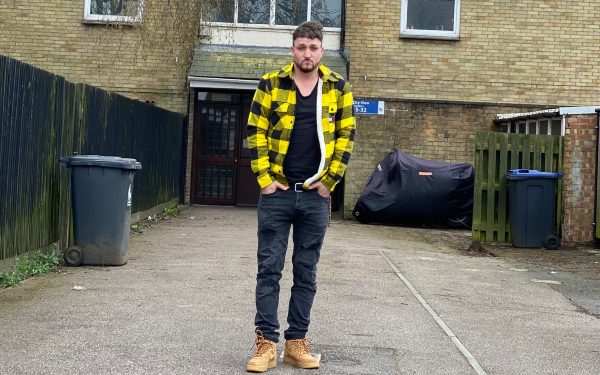 “The letters of eviction, the urine in the stairway, the windows that don’t shut, the kitchen that isn’t fit for purpose, the overpriced pay-as-you-go gas and electric, and the lack of access to nutritious food.”

Newly qualified social worker Dominic Watters is describing his longstanding experiences with food insecurity and poverty. Seeing the people around him also struggle has led him to become a voice for those in similar circumstances, he says.

“The fact it’s taking a single dad from a deprived council block and not those in power to highlight the changes needed, in itself demonstrates the discrimination poor people experience,” says Watters.

He has spent the past few months preparing to share his knowledge with other frontline workers for an event on World Social Work Day last week.

I’m not sure I’m qualified enough to tell social workers what to do but I hope sharing my reality gives an insight into how it is for many of us out here.”

“Feeling unheard is a norm for people living in poverty,” says Watters.

Taking place via Teams in the kitchen of his council flat in Kent, the event was a great success, he says.

“Loads of questions were asked which directly relate to the work I’ve been doing. There was so much positive feedback that I was a bit blown away,” he adds.

The British Association of Social Workers (BASW) and Social Work England helped promote his event through their websites.

“I think people wanted to attend because they want to hear from someone who is currently going through these inequalities, rather than from the outside looking in,” says Watters.

‘There were days only my daughter ate’

Watters is raising his daughter as a single parent.

“It’s been tough at times. There have been days where only my daughter has eaten, and I’ve had what’s leftover or nothing at all,” he says.

Often having to rely on food banks, with constant worries about how to keep a roof over their heads, he previously put his career on hold.

When his daughter became a teenager and less dependent on him, Watters had time to reflect on his career options. His longstanding experiences with social workers meant choosing the profession made sense, he says.

Watters qualified as a social worker in December 2021 and has an interest in working with children and families. He is currently looking for an assessed and supported year in employment (ASYE) position.

Watters has previously been invited to share his knowledge in discussions organised by leading social work organisations, including by joining a panel for BASW’s 50-year-festival in 2020.

The event encouraged Watters to translate his concerns into writing.

He began creating a pamphlet detailing his experiences, which was originally going to be included in BASW’s Professional Social Work (PSW) magazine, but turned into something much bigger.

A callout yielded several contributions, enough for a book, Social Distance in Social Work: COVID Capsule One, published in June 2021.

The title was sparked by an analogy Watters identified between social distancing restrictions and the distance between people in society because of poverty, culture, class and other factors.

The book details his experiences with food insecurity and how Covid amplified these issues, but also includes the voices of leading academics and practitioners in social work and excerpts from people with lived experience of poverty.

Watters’ ambition did not stop there. With his first campaign idea in mind but unable to fund it, he was stuck. With his longstanding rapport with the Social Workers Union (SWU), Watters turned to it for help.

Watters’ Food is Care campaign, launched in November 2021, was the first financed by the SWU’s campaign fund, set up last year in partnership with communications agency Campaign Collective.

The campaign is calling for urgent action from the government and local authorities to address food insecurity and poverty.

“The campaign is about making the government stop seeing poor people as undeserving,” says Watters.

“It’s also about letting people in power know that the poor and often single parents in council estates are hungry, feel unheard, and shouldn’t have to rely on food banks,” he adds.

An online survey for the campaign, which targeted qualified social workers working with children and families experiencing food insecurity, receiving 119 respondents, found that 64% of social workers reported concerns about families being able to provide food for their children.

Almost three-quarters (71%) reported that families were also compromising on the quality of food, with 59% saying they were scrimping on the quantity, to help save money.

A large majority (84%) of social workers said families they worked with were relying on food banks, found the survey, whose results were published last month.

Based on these findings, Watters would like to see urgent action from the government. He is also calling for food insecurity to be included as part of social work training, so that practitioners see these issues at the forefront of their roles.

“The campaign is not only calling for better awareness and training on the issues behind food poverty, but also for food insecurity to be considered in law and policy,” he says.

In light of Watters’ World Social Work Day event, local authority managers pledged that they would work with him to help roll out his food insecurity training to staff, he says.

“This is really exciting as it will result in improving services for disadvantaged and marginalised families,” says Watters.

Looking to the future, Watters has been booked to speak at other events in the upcoming months.

“If you are interested in learning more about the Food is Care campaign, keep a lookout,” he added.

Community Care Live is back – and in person

Social workers satisfied with employers but often required to do more with less, finds health check
Higher early help spend and less poverty strongly linked to positive Ofsted ratings, research finds
Less than 1% of social workers reported to regulator referred to hearing or found to have fitness to practise issues