‘Moving at pace’: how a children’s services company is working to turn things round

Sunderland’s Together for Children, judged ‘inadequate’ by Ofsted, is prioritising consistency and a better front door for people using its services

By Sarah Dennis on August 16, 2018 in Children, Social work leaders 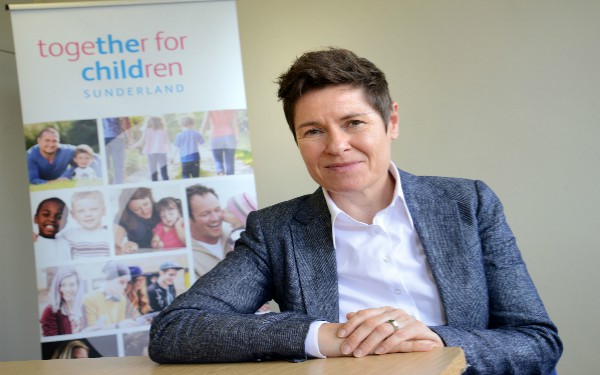 “We didn’t wait for Ofsted to tell us what needed to be changed to start getting on with it,” says Jill Colbert, the newly appointed chief executive of Together for Children (TfC), which took over running children’s services in Sunderland from the council in April 2017.

She is referring to carrying out a review of the organisation’s ‘front door’ – its integrated contact and referral team (ICRT) – which was top of a list of recommendations by Ofsted after its latest inspection, carried out in the spring, deemed TfC ‘inadequate’ overall.

Ofsted’s report, published last month, acknowledged that services to children had progressed, albeit from the “low base” of an across-the-board ‘inadequate’ judgment at the last full inspection in 2015.

Inspectors noted “solid improvements” for children in care, those with adoption plans and care leavers. “Significantly more” children and families were found to be receiving access to early help provision, with a more stable workforce and lower caseloads leading to better practice in some child protection work.

But, inspectors said, this was often “to the detriment of children in need, who are not afforded the same priority”. Overall TfC was found to have made insufficient progress with its services for children who need help and protection, which remained ‘inadequate’.

Senior leadership and management – also rated ‘inadequate’ – lacked a “good enough understanding of the quality of services being provided in some areas”,  Ofsted said.

With ‘alternative delivery models’ for children’s services making uneven progress in the local authority areas where they are being explored, we were keen to hear more from Colbert, who joined TfC in July following the inspection, as to how the fledgling service will be moving forward.

The ICRT, Colbert says, is an “absolute priority”. It was said by Ofsted to be “ineffective” with statutory guidance “not followed”, resulting in delays.

“The single biggest thing we needed to get right, in light of what we learned during the inspection and [from] the report, was the functioning and effectiveness of what we call our front door – often the gateway to families through to the rest of their journey through children’s services,” says Colbert.

To get things rolling, Colbert says TfC engaged with neighbouring and high-performing local authorities to gain feedback on their approaches.

“We’ve had a diagnostic piece of work done,” says Colbert, adding that a report on progress was due soon.

But more tangible changes have begun, she says. “We’ve been looking at the management structure within the [ICRT] team, so we’ve got decisions being made at the heart of where they need to.”

This meant stripping out a middle-management level, which according to Colbert wasn’t helping people make decisions in a timely fashion. “We’ve moved to an assistant team manager and team manager structure, which is relatively straightforward but makes allocation of work and the opportunity for responsive supervision conversations and decisions [quicker],” she says.

Thresholds are also being comprehensively looked at, with the local safeguarding board having led a consultation with staff and partners on guidance. “It’s important to engage partners with that because they’re the ones referring families and children in, so we’re not shying away from some of those difficult conversations,” Colbert says.

Scale of weaknesses ‘not understood’

Ofsted judged senior managers and leaders as not understanding the “scale in weaknesses in practice” found during the inspection.

The new service delivery model had not moved things on so as to ensure risks to children were being consistently identified and responded to, inspectors found. Several top-level staffing changes – TfC’s first CEO Alex Hopkins resigned in late 2017 – had slowed the pace of change, especially for children in need of help and protection, the regulator said.

Colbert, herself in a role that dovetails the chief executive of TfC with the director of children’s services in a statutory appointment by the council, acknowledges there are quality assurance gaps.

“TfC does produce very comprehensive performance reports,” says Colbert. “I think the missing picture for Ofsted, and again a consistent challenge for us all, is how you provide a strong understanding of the quality of practice.

“What we really need to build on is enhancing the understanding of what quality looks like,” she adds, “and moving away from looking at the data to looking at the lived experience of families, and for the child within that.”

“The effective adoption service has demonstrated that it now offers timely, child-sensitive and supportive interventions for adoptive families as well as for birth families,” the report said.

Services for children in care and care leavers, meanwhile, had moved up to ‘requires improvement’ since 2015.

“Recent and improved partnerships with schools to develop mental health and well-being groups are beginning to improve the awareness of the needs of children in care,” inspectors added.

“I would say that also happened in the parts of the service that Ofsted had a view on that weren’t yet over the line in terms of ‘requires improvement’,” she says. “The issue was, we hadn’t achieved a level of consistency in practice, whereas we have in [terms of] adoption and in children in care and care leavers.”

Within adoption, she points to staff making good use of analytical tools to understand children’s journeys through the pathway. “They focused on early permanence placements, and have done really well in implementing foster-to-adopt placements,” she says.

The service made 12 foster-to-adopt placements in 2017/18, which Ofsted noted was a significant improvement from just one in 2015/16.

Before Ofsted’s report was published, TfC held briefing sessions with staff around its contents, which Colbert says resulted in “some really good ideas” about ongoing engagement between senior managers and practitioners.

“I think the trick is to weave that into an everyday way of talking to each other, so engaging with staff isn’t seen as something separate to what we normally do,” she says. “Because the organisation is new and has had a series of substantial challenges, sometimes what you would tend to lose [is] the time and the focus to do good engagement with staff. So that needs to be a real priority for us.”

Ofsted noted that while the demand for permanent staff outstrips supply in Sunderland – and indeed in neighbouring authorities – TfC’s “dedication” to recruitment and retention was improving stability, though this was not evident in all teams.

The regulator found gaps remained in training and development – notably around child sexual exploitation – but said the assisted and supported year in employment (ASYE) framework was ensuring that newly qualified staff got the support and training that they need.

Colbert, who says she is “really struck” by staff members’ talent and commitment, says another recruitment campaign for permanent employees will begin in September. TfC, she says, is “working at pace” to remedy the shortcomings identified by Ofsted.

But some things will not have short fixes, she says, in a city that experiences “quite profound” levels of deprivation in some of its wards. “There are some services that are working well for children. We’ve got to build that consistency across the system. But it is a massively exciting opportunity.”

2 Responses to ‘Moving at pace’: how a children’s services company is working to turn things round