‘This is real life social work, you should film this’ – practitioners on letting Panorama’s cameras in 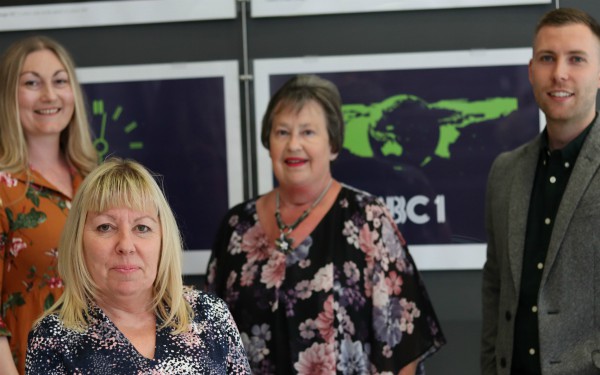 While social work with children appears misunderstood by large sections of the public, its adults’ counterpart is often invisible, despite practitioners playing a vital role in supporting people with care needs to lead independent and safe lives.

Amid the challenges of applying legislation and promoting human rights under significant budget pressures, adult social workers are given precious few opportunities to share the challenges they face at work.

However, a two-part Panorama documentary focusing on the pressures faced by people needing care and support in Somerset – and the professionals striving to provide this – shines a light on the realities of social work with adults.

The first episode of Crisis in Care, which aired on BBC One last night, featured Somerset adult social care staff exploring how stretched finances are affecting their ability to provide support to older and disabled people.

Community Care spoke with practitioners, managers and director of adult social services Stephen Chandler about their decision to go in front of the cameras and highlight the realities of working in social care.

The documentary was filmed against the backdrop of the enormous financial challenges the council was facing in 2018, driven by significant overspends in children’s services.

Its external auditors, Grant Thornton, concluded in July 2018 that: “The inability of the council to deliver against its budget is now pervasive to the whole council and without urgent actions could result in it running out of money in the next two to three years.”

But with the council and its services already attracting attention from the media last year, the thought of inviting BBC cameras to film social services at work may not have been many council leaders’ first choice.

However, Chandler, who was approached by the BBC along with all other directors of adult social care in England, says he believed it was time for social care to “stand up and be counted”.

“It was difficult from my point of view because I knew the programmes weren’t going to be about all the fantastic stuff the council is doing,” he says.

“The purpose of the film was to look at the impact of social care on people’s lives up and down the country, for good or bad – that was a compromise we had to live with.

“You see in the film social workers struggling to do right by the people they are working with, by service users.”

“It’s a very realistic portrayal of what our life is like here in Somerset, but it’s no different to other councils across the country.”

Adult social care locality manager Chris Denovan admits she was initially unsure about having cameras in the office. With her staff already under huge amounts of pressure, she says she had to carefully consider what was in the best interests of her team, who had shown some anxiety at the proposal.

In particular, Denovan says team members were worried about how the profession would be presented on film, especially during difficult moments.

“It would be true to say that there wasn’t a staff member across the whole county [who didn’t have doubts about the films], asking questions like, ‘Will it be taken out of context? Is it going to show us in a bad light?’ – all of the usual anxieties”.

But after speaking with Chandler and the director of the series, Denovan says she felt confident that going ahead with the films was “safe to do”. The task now was convincing her team.

Adult social care locality lead Sharon Gibbs was one of the staff members who Denovan had to bring round to the idea. She was “quite worried” about the prospect of being followed by cameras, but her attitude soon changed once filming began.

“The crew were so friendly and when they come in the office, everyone took to them. They weren’t in your face and people sometimes didn’t even know that they were here filming. They were very respectful of the service users and, they didn’t film bits that the service users weren’t comfortable with”.

“I think it was important that we had planned and unplanned filming. Because our world changes so quickly, I think it was useful for the production team to see it how it is honestly,” he says.

“For example, something would happen, a conversation or a serious meeting, and we would be brought together, and they would ask if they could film and that was important seeing that, for us, it wasn’t all staged and it wasn’t produced.

“It was very much, ‘this is our world’ and they are being given an insight into that. Again, everyone was quite anxious about how it would be portrayed, but I think people wanted to show what day-to-day work really entails.”

In one of the most poignant scenes of the first episode, Denovan calls a crisis meeting with her team when she realises some of them are struggling to keep up with their workload.

One social worker, who calls into the meeting via Skype, tells the team that she may quit the profession as she is unable to help service users in the way she would like.

Although showing the pressures of the job, Denovan says she encouraged the BBC team to record the meeting in order to portray reality.

“The scene with all of us having a discussion around the table wasn’t planned. The crew were due to film a peer forum, but I was dealing with social workers in tears, telling me they couldn’t do the job anymore and that they were going to give up the profession.

So, I made a decision on the spot to say this is real life social work, you should film this.”

“We put the peer forum on hold for half an hour and asked my social workers if they were alright to be filmed. I said to them, if you’re telling me you’re stressed, I want the world to know because this is what we are dealing with.”

Wrestling with recruitment and retention problems

Denovan, who has been working in social work for over 40 years, says this type of incident is not uncommon, with the council having major problems in both retaining and recruiting staff.

This is reflected by the latest statistics on the social care workforce from NHS Digital, which show that Somerset’s  vacancy rate for adult social workers as of September 2018 (17%) was more than double the national average (8%).

“I’m struggling to recruit social workers,” she  says. “In this team alone I have four vacancies that I ran for a whole year, well that was more than 25% of my social work team and that’s huge! So, the cameras needed to listen”.

Following the filmed discussion, Denovan says she was able to use the footage captured by the BBC to show senior managers the pressure her team were under and push for a recruitment drive.

“Straight after that scene I got permission to find a locum social worker, and he’s supported the team and we’ve managed to get our waiting list down in the last six months.

“I’ve recruited other staff as well, so we are in a much better position then we were six months on but it’s all very wobbly. You only need one to go sick, or another one to go on maternity leave or one to go on a big training course and suddenly it seems like the Mary Celeste. That’s how fragile it is.”

Bray hopes the programme will make viewers more aware of the “emotional labour” that social workers take on board.

“The job does take a lot out of you and there are a lot of pressures,” he says. “We try and give the best service we can, but when we are short staffed or have a high amount of work, the stresses show, just as they did during that scene.

“The scene showed that social workers are desperate to do their best for everyone, but we just couldn’t manage that”.

Gibbs suggests that one of the reasons the pressures on social workers may not be well known to the public is professionals’ insistence on keeping a stiff upper lip and not sharing their concerns with service users.

“Social workers are very good at hiding their stresses from the general public because we are going out there to help people in crisis, not make their situations worse.

“Workers are working a lot of hours above and beyond, cancelling holidays because they are prioritising their work.” 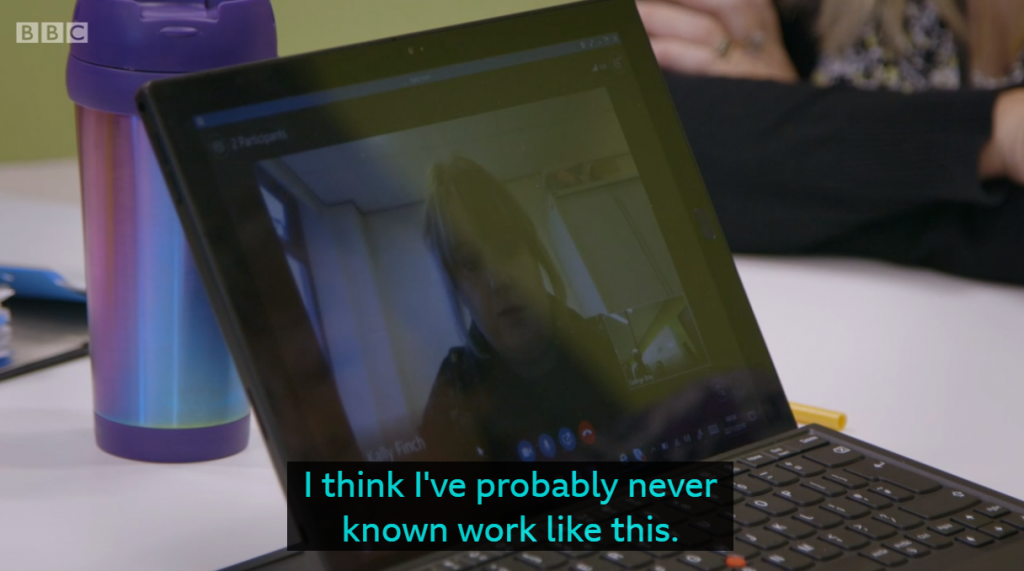 Although the team agree that the film could have done more to show the pressures on frontline social workers, they say it was important that viewers were able to see how service users were being affected by a lack of social care funding.

“I think we knew the programmes had to be mostly about the service users and their families, the crisis they are in and what’s causing it,” says Gibbs.

Denovan agrees that it was important to show the wider workings of the council in order to demonstrate how social workers are influenced by decisions that are made higher up in the council.

“I think the bit with the councillors and the chief executive, I think that was really important as it put social work and our team in context of where we sit.

“It shows that the pressures financially are coming from wider government and they then filter down to us. It’s not just social work teams that haven’t got the money, it’s very much a wide-scale issue and I think that’s very important to see and hopefully it will give the general public wider context.”

With one episode still to air, Chandler says he hopes the films will “bring to life” the pressures being faced by social workers in Somerset and educate the public on the role they play in providing services.

“I think the programme will help people understand what social workers are in a place where they are having to deliver a difficult message that isn’t necessarily their personal message, but they are having to do it on behalf of the service or the council, which is why in some ways I sometimes tend to take those really difficult situations”.

He adds that, in proving that the council had been able to work alongside a camera crew and build up a relationship with the media, he would like to see other councils follow suit.

“I think the social work profession is very wary of a film crew coming in and being in their space for a while because often social workers are portrayed in the media when things go wrong, whether that’s childcare or adult protection.

“I would hope this programme helps provide some reassurance that it is possible to work with the media in the context of showing what the role is without being subject to criticism, and have it presented in a positive, realistic and accurate way.”

Meanwhile, Gibbs encourages social work teams from other authorities to be honest about their situations in order to help bring about change.

“I think other local authorities need to be honest and put their hands up and says, ‘yes, this could be us or this is us’ and not just to bury their heads and think we don’t want other people to know we’re in such as mess as well.

“They have to stand up and say that’s us too.”

Service users left isolated as councils fail to meet eligible social support needs, say social workers
The Ofsted Interview: ‘Data is nothing about numbers and everything about individual children’

6 Responses to ‘This is real life social work, you should film this’ – practitioners on letting Panorama’s cameras in