‘The beating heart of the team’: how personal assistants can free social workers from the admin grind

In 2016, Hampshire council began rethinking how its administrative staff could better support social workers. The move has made a big difference to time spent on direct work, practitioners say 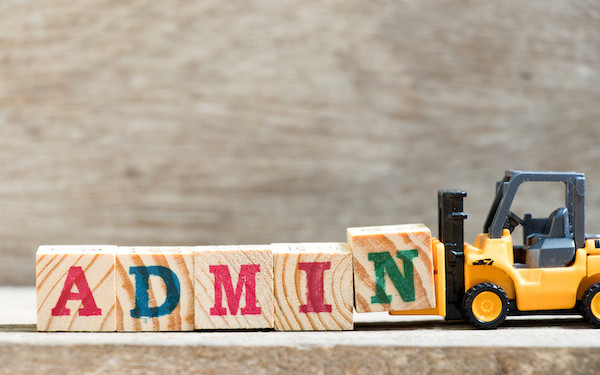 “I just try to take a laid-back approach and say, ‘You’ve got a lot on, and I’m here to help,” explains David Green, a personal assistant (PA) in Hampshire council’s children’s services, of his relationship with social workers.

“I think sometimes social workers don’t appreciate just how hectic and upsetting what they do is,” he goes on. “You get the occasional person who wants to do things their way, who is used to working on their own – but in time they come round to asking for a bit more support.”

Numerous recent studies have highlighted how many social workers would appreciate a little more support in terms of managing the job’s administrative overload, which is a key factor in stress and burnout.

Eighteen months ago, the British Association of Social Workers (BASW) launched its 80-20 campaign, its name highlighting the bleak ratio of case-management grind vs time with families that professionals can face.

But in Hampshire, rethinking the role of admin staff in order to support individual social workers and families has, over the past four years, in conjunction with other practice changes, played a significant part in pushing that imbalance back.

Ofsted’s inspection last spring of the South East county – which saw its longstanding ‘good’ rating rise to ‘outstanding’ – mentioned the impact of PAs as it found that frontline practitioners now had “the time to work directly with children and families”.

Community Care paid a visit to Hampshire’s Winchester headquarters to hear more about how that battle with the clock is being waged.

‘I cannot do without them’

“I was really conscious of the bureaucracy around social work – people were telling me about it every day, and we could see it,” remembers Stuart Ashley, Hampshire council’s assistant director for children and families. “We estimated they spent around 60% of their time in front of a PC – that’s not what we wanted – and we had some really good admin staff, so we thought, what can we do differently?”

Helping that thinking to percolate was a significant chunk of government cash. In 2015, Hampshire – along with the Isle of Wight, with which it has shared services since 2013 – received just under £4m from the Department for Education’s children’s social care innovation programme fund.

The money was to support a range of interlinked changes to practices and structures (see box), designed to increase social workers’ capacity to work with children and families at an earlier stage and to cut repeat interventions.

‘It allowed us to try new things’

Hampshire council’s innovation programme funding underpinned seven initiatives, including its introduction of personal assistants – not all of which bore fruit. A scheme to provide social work surgeries in schools, for instance, saw no drop in referrals and was axed as not cost-effective –though What Works for Children’s Social Care is now piloting a project along similar lines.

Other elements, though, have been more effective. A growing network of volunteers now augments children’s services operations, such as by mentoring young people or conducting interviews after a missing episode. Meanwhile social work teams now incorporate multi-disciplinary ‘intensive workers’ who carry out interventions with families, following on from an approach piloted using the DfE money.

“In fairness, the innovation funding allowed us to try new things – and that gave us the confidence to [implement our] Hampshire Approach [model], the next phase of which is driving change around children in care and placements,” says assistant director Stuart Ashley. “It’s iterative and will keep going on.”

Several of these have achieved some success, and cash has also been spent in other familiar areas, such as IT upgrades – including mobile technology. But according to Ashley, the implementation of PAs – beginning with a 32-staff pilot in 2016 – has had arguably the greatest impact.

In simple terms, the move has involved a shift from staff servicing a team to directly assisting social workers – typically four per PA – with their work. Similarly to the ‘unit coordinators’ who supported small teams within the Reclaiming Social Work model pioneered a decade ago in Hackney, they also provide an extra point of contact for families.

“By the end of the first year [the period covered by DfE money] we had social workers saying, ‘I cannot do without them,'” says Ashley. “Where we tried PAs in child in need teams, others were asking, ‘Why can’t we have it?'”

When the council invested in 100 new social workers 18 months ago, recruiting 25 PAs to support them formed an integral part of the £6.5m package. Provided a council is willing to invest, and to tweak the shape of its teams, the change is “replicable anywhere”, Ashley adds.

‘We make sure things are picked up’

An initial 2017 evaluation of the impact of Hampshire’s innovation programme, by academics from Oxford Brookes University, found stress levels and sick days reduced where PAs were introduced, and estimated that for every £1 spent on them, £2 was saved. CIN social workers in pilot teams told researchers that time spent working with families increased from 34% to 58% over nine months.

But what does a normal working week look like for a PA – and why are they held in such esteem by social workers?

“It’s a broad range [of duties]: booking meetings, filing to court, putting together client paperwork – it could be anything,” says Lauren Coleman, a colleague of Green based in Hampshire’s Andover offices.

Both PAs work within Hampshire’s children’s assessment and safeguarding team (CAST) system, which was introduced in 2017. This sees teams of typically eight social workers, a team manager and a deputy – each of whom have a rotating monthly duty week – handle children’s cases from the front door until they are in a long-term placement.

“I will catch up with my social workers each week, go through each case – and I do feel I know all of them – and be forward planning, and just working together to ensure we’re on top of everything we need to be,” Coleman says.

Visits and assessments, Green adds, are pulled from a shared data resource at the start of each week, with emails sent to social workers to let them know what is outstanding, and copies printed for managers so everyone is in the loop.

“If there are issues with people off sick and so on, those on duty can refer and make sure things are picked up,” he says.

The result, according to Ashley, is an “incredibly strong” performance in terms of the timeliness of visits and assessments, child in need meetings and child protection conferences.

“It’s not that social workers don’t want to achieve these things, but it’s always quite a chaotic role as it’s so reactive,” he says.

‘It’s not just about admin’

But the benefits of the PAs extend well beyond providing a box-ticking service, explains Simon Cresswell, a social worker who has previously worked in the CAST structure and has now moved to a team working with children in care.

“PAs are in some ways the beating heart of the team – they are in the office all the time hearing and seeing it all,” says Cresswell, who rates his wellbeing and stress levels as “pretty good, for a social worker”.

“If you come rushing in, in the midst of doing visits, they go, ‘Oh someone phoned, this has happened,’ you kind of bounce off each other – and also, they are building a rapport with families,” he adds.

PAs’ details are on social workers’ communications – providing some continuity if they are unavailable, says Coleman.

“I know David’s cases and we know each other’s families,” she says. “Working together, we’ll ensure there’s someone they know on the end of the phone rather than going round the office randomly.”

It’s not only families who feel better for having a familiar ear to bend about their situations, admits Cresswell.

But, he emphasises, it’s the ability of the PAs to pick up the slack here and there that enables him to focus on relationship-building with less fear of the tyranny of paperwork.

“Sometimes if you’ve got an hour spare and it’s a case of typing some letters for parents or going to a young person’s school play, you now have the choice,” he says.

“Before it would be, ‘I’m sorry, these have to sent today.’ In children in care teams, building relationships is such a key part as you could be with them 10 years – it’s [little things like being able to say], ‘We can go to McDonald’s in three months’ time, if we can build this plan and work together.'”

7 Responses to ‘The beating heart of the team’: how personal assistants can free social workers from the admin grind