People would be left without care or unnecessarily in hospital on back of cutting off EU migration into sector, say providers

The new system, to take effect from 1 January 2021, will require skilled workers from overseas to reach a points threshold in order to obtain a UK work visa.

No care worker would qualify under the system and only a tiny minority of senior care staff would. While this is true of the current system in relation to staff from outside the European Economic Area (EEA), free movement of workers from within the EEA has provided a rising proportion of staff for the care sector (8% of England’s independent sector workforce in 2018-19, up from 5% in 2012-13).

‘More would go without care’

“Cutting off the supply of prospective care workers under a new migration system will pave the way for more people waiting unnecessarily in hospital or going without care.”

He also criticised the government’s view that employers should adjust to the end of free movement.

“Telling employers to adjust, in a grossly underfunded care system, is simply irresponsible,” he said.

“Companies and councils can’t recruit enough staff from the UK so have to rely on care workers from elsewhere, but even with these migrant employees, there’s still way too few care workers to meet demand,” McAnea said.

McAnea said suddenly ending this “desperately needed supply of labour” will cause huge problems across the country and urged the government to think again.

“The government needs to get to grips with social care urgently. It must fund care properly, with increased wages and training to make care an attractive career for UK residents and migrant workers alike,” she said. 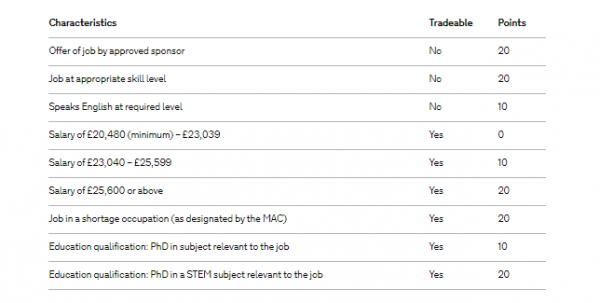 Applicants to come to the UK as a ‘skilled worker’ will have to meet a number of criteria to reach a total of 70.

While care workers could attain 30 points from a job offer from an approved sponsor (20 points) and being able to speak English at the required level (10 points), this appears to be the maximum they would get.

Senior care workers would likely reach 50 points, as they would obtain the 20 points from having a job at the appropriate skill level, which is based on being qualified at RQF3, equivalent to having A-levels. According to the latest categorisation, senior care workers have this level but care workers do not.

Salary threshold is another criteria in which most care workers, including senior staff, are unlikely to pick up points. According to the latest Skills for Care annual report on the workforce, a senior care worker in the independent sector earned £17,600 on average in 2018-19, while care workers earned £16,200. To earn an extra 10 points, an applicant must earn between £23,040 and £25,599, then £25,600 or more for an extra 20 points.

In a January report for the government, looking at how to implement ministers’ ambitions for a points-based immigration system to replace free movement from the EEA, the independent Migration Advisory Committee (MAC) said the sector’s problems were rooted in low pay, not immigration policy.

However, while the government has, in effect, gone ahead with the MAC’s proposals, it did not refer to tackling social care’s funding challenges in its immigration statement, nor is there any news as yet on how it plans to implement the Conservative manifesto pledge to find a long-term solution to the sector’s problems.

Some sector leaders challenged the idea implicit in the government’s plans that care work was low-skilled.

Julie Ogley, president of the Association of Directors of Adult Social Services (ADASS), said: “We cannot get the care and dignity we need without brilliant carers and it is shameful that care work is described as low-skilled.

“Yesterday’s announcement underlines exactly why the government needs to urgently bring forward proposals for reform of the social care system and provide investment to reward and remunerate staff for their hard work with a workforce plan that compliments the NHS one shortly to be published.”

Saffron Cordery, deputy chief executive of NHS Providers, said: “The government’s decision to lower the salary threshold does nothing to address the dire staff shortages we see in the social care sector, on which the NHS and public depends.

“Low pay does not mean low skill, we urgently need people to take up these vital and rewarding careers within social care.”

How existing workers can remain in the UK

While the immigration plans will halt care workers coming in from the EEA to work in the care system, existing staff will have until June 2021 to register to stay in the UK under the EU Settlement Scheme.

So all existing staff from the EEA or Switzerland will be able to stay so long as they remain in the UK and do not have any criminal convictions.