Most councils report rises in weekly foster and residential costs, because of factors including fewer placements ending and increased fee requests from providers

By Alice Blackwell on October 22, 2020 in Children, Coronavirus

Four in five local authorities have reported a rise in weekly foster and residential placement costs due to Covid-19, a Department for Education (DfE) survey has found.

The increases, which have been reported by 80% of councils since May, have been driven by factors including requests for fee hikes from residential care providers, the increased cost of foster care support packages during lockdown, increased placements costs for children with additional needs and fewer placements ending during this time.

For most councils, the cost increases have been of 10% or less, though for one-fifth, they have risen by 11% or more for residential care placements.

The survey was the 10th ‘wave’ of the DfE’s research into the impact of the coronavirus on local authority children’s services, which started in April and has been taking mainly fortnightly snapshots of costs, referral levels, staffing data and contacts between social workers and children. The latest data refer to the situation in late August and the first half of September.

The findings show total referrals to children’s social care across the first 10 waves was 13% down on the average for the same period in 2016-18. However, it seems this trend may be coming to an end as waves eight and nine showed referrals were 10% and 12% above 2016-18 levels, respectively. 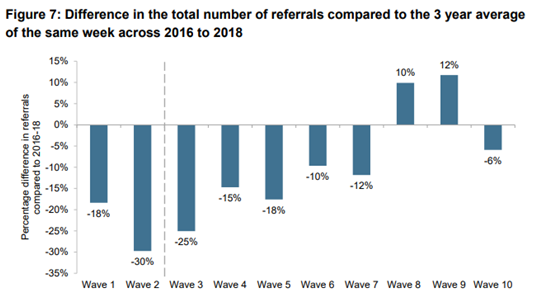 In wave 10, which concerns data for 7-13 September when children returned to school, referrals were 6% down overall on 2016-18 levels, though they were 5% and 7% up, respectively, from health and the police service for same week in 2018. School referrals were down 12% in wave 10, but this is likely to reflect attendance levels, with approximately only 88% of pupils in attendance on 10 September.

Across all waves of the survey, councils reported increases in domestic abuse referrals, while in more recent waves (9 -10), some local authorities described increasing case complexity, with examples including more cases involving non-accidental injury, the number of new-born children presented in care proceedings rising, more cases involving young people self-harming and escalations of risks in cases that are already open.

The wave 10 survey report said that councils remained braced for a spike in demand, due to children returning to school, which some had planned for by shifting resource from assessment to front-door teams.

In response to the latest data, Association of Directors of Children’s Services president Jenny Coles said: “Children’s services departments across the country are now returning to business as usual as schools have now fully opened and children are in contact more with professionals who can raise any safeguarding concerns. As such, working patterns and contact with vulnerable children is now more consistent with usual ways of working.”

However, she said government needed to step in to help councils deal with “the anticipated peak in referrals to children’s services”, adding: “Children’s services already faced a significant funding gap before the pandemic hit and Covid-19 has only increased those cost pressures…The government must act now to provide children’s services with the certainty of an ambitious and sustainable long-term funding settlement. Children and their families deserve more than just the bare minimum levels of resourcing and support.”

British Association of Social Workers vice-chair Lewis Roberts also predicted increased demand for services over coming months, saying: “We’re likely to see a backlog of issues that the pandemic will be intensifying: issues around parental mental health, parental drug and alcohol use, and young people’s mental health and wellbeing… BASW would be asking government to make sure that services are appropriately funded and that they’re working with the sector to make sure that those services are in place.”

He added: “Sector leaders and the government need to work together to ensure that in any increase in referral rates and in anticipated work, social workers are supported to ensure the caseloads are kept manageable…If there’s a surge in referrals, then there needs to be the staffing in place, and the working conditions in place to manage those.”

The research showed that the impact of social worker sickness or self-isolation has fallen through the pandemic; while 13% of local authorities in waves one and two reported that over 10% of staff were not working due to Covid. In wave 10 it had reduced to just 2%.

The temporary register of formerly registered social workers set up by the Coronavirus Act 2020 remains open to enable councils to draw on additional staff if they face a spike in referrals, though it appears to have been little used to date.

How structural racism faced by Roma families in the child protection system can be tackled
Overhaul needed to end ‘inhumane’ hospital care of people with learning disabilities or autism, says CQC