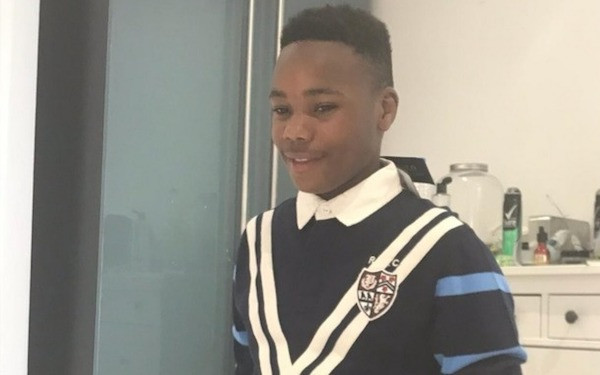 Jaden Moodie, who was murdered in 2019 after being criminally exploited (credit: Met Police)

A teenager killed in January 2019 was “served poorly” by the absence of national guidance around how to deal with criminally exploited children who are found out of their local area, an investigation has concluded.

Jaden Moodie, 14, was knocked off a moped in Leyton, East London, and stabbed to death by a group of attackers in an apparent gang dispute. Ayoub Majdouline, 19, was sentenced to at least 21 years in prison last December after being found guilty of Jaden’s murder. Three other men who were with Majdouline at the time remain at large.

Three months before Jaden’s death, he was found in possession of crack cocaine and money with an older boy in a ‘cuckooed’ flat – where the property of a vulnerable person is taken over for drug dealing – in Bournemouth, more than 100 miles from his home, and arrested.

A serious case review by Waltham Forest safeguarding children board found the opportunity his arrest provided to divert him from exploitation within county lines drug dealing networks was lost due to a lack of co-ordinated arrangements between local authorities.

While children’s services and other agencies within Waltham Forest then enacted plans to safeguard Jaden – who was staying with his grandmother at the time of his death – these were complicated and lacked strategic leadership, the review found.

In a series of recommendations, it said the findings should be referred to the Department for Education (DfE) and other government bodies, alongside requests that key guidance documents be updated to ensure children at risk of harm from outside the family are adequately protected.

Earlier this year, a panel of government advisers also called for one of those documents, Working Together to Safeguard Children, be reviewed specifically in order to better address risk from outside the home.

Jaden had moved to stay with his grandmother in Waltham Forest, in April 2018, after threats were made against him in Nottingham, where he had previously lived with his mother, Jada Bailey, and siblings, due to debts he was said to have built up.

In the period leading up to his move, Jaden’s home schooling by Bailey had gradually broken down, leaving him increasingly unsupervised and getting into trouble.

‘We weren’t set up to deal with this’: how councils have responded to county lines

Social workers ‘did not respond’ to risks murdered teenager faced

Bailey removed Jaden from mainstream education when he was 12 after a series of incidents of allegedly bullying other children, including one – reported by Nottinghamshire police to his school – in which he was said to have threatened to stab another boy and shoot him with an airgun. Her decision was influenced by a perception that there was an element of racism in the way the school, which predominantly educated white children, treated him, including disciplining him for minor incidents.

The serious case review found Nottinghamshire police did not share information around the alleged firearm threat – or a second report, in July 2017, in which he admitted stealing another boy’s bike and it was alleged that another child involved in the theft had a gun – with other agencies. The information was not shared with youth offending services even after Jaden became involved with YOS in early 2018 over an offence involving a gun.

“This knowledge would also have assisted the Waltham Forest multi-agency safeguarding hub (MASH) later in 2018 when they were considering what was known about [him],” the review’s author, John Drew, wrote. “On this basis I consider this lack of communication a systemic weakness.”

Waltham Forest’s MASH only became aware of Jaden after his arrest in October 2018.

The review heard that the appropriate adult who attended Jaden’s police interview in Bournemouth felt he was a “vulnerable young person frightened he was being groomed and coerced into by others, including the co-defendant”, the older boy he was found with.

Dorset police contacted Waltham Forest’s emergency duty team but they had no facility to respond, so rather than place him with foster carers overnight a decision was made for officers to take him back to London.

“Had it been possible for [Jaden] to have met specialist child exploitation workers while in custody, and brought back to London by [them], and ideally if they could have continued to work with him, I believe such workers would have been able to exploit the ‘reachable moment’ of his crisis,” Drew said.

The report noted that even though such ‘rescue and response’ arrangements had since been implemented on a pan-London basis around criminally exploited children, both Bournemouth’s youth offending service and Waltham Forest’s duty team remained unaware of them at the time the review was being conducted.

Moreover, it found Ministry of Justice guidance issued in November 2019 said police from the area where a trafficked child is found should return him or her to their home borough, in apparent contradiction of the rescue and response approach.

“There can be no guarantee that the officers returning the child will have any specialism in working with children, in particular those who are being criminally exploited,” Drew said in comments critical of the guidance. “There can be no continuing relationship between the child and the returning officers after this journey and so no potential to capitalise on any reachable moment during what will often be a long journey with plenty of time for reflection.”

After Waltham Forest’s children’s services became involved in Jaden’s life, the review found there were no fundamental flaws in their approach but nonetheless concluded that “insufficient focus” was given to contextual safeguarding elements.

Social workers did not discuss drug debt bondage with Jaden, despite “it being an obvious consequence of his being found selling drugs in Bournemouth”, nor did a multi-agency strategy meeting take place, in line with guidance, as soon as there was reasonable cause to suspect he might be at risk of significant harm.

Bailey told early help social workers, who were initially involved after Jaden’s return from Bournemouth, that he was “being groomed and she was powerless to stop this”.

Both children’s social care’s and youth offending services’ involvement was stepped up after an incident, in November 2018 in which Jaden appeared in a video brandishing a firearm while wearing his school uniform (he had started at a Waltham Forest school in July 2018). He was also permanently excluded from school as a result of this episode.

By the time of Jaden’s death, professionals had plans in place for working with him, and he had been offered a place in a pupil referral unit while his mother had been granted a tenancy in Tilbury, Essex.

While the review identified some good practice, and said no one could be blamed for failing to prevent or anticipate Jaden’s fatal assault, it nonetheless concluded that a more strategic joint approach by agencies could have made an impact. In particular, it found that Waltham Forest’s housing services, which held key information about the past threats to Jaden in Nottingham, should have been included in discussions.

“There appears to have been a compelling case for bringing together, under strong leadership, all those who had information and insight to contribute to developing a unified response to Child C’s vulnerability,” the report said.

“[Waltham Forest safeguarding children board] will be referring this report to the Department for Education, and in so doing should formally ask the Department to clarify whether (and how) it intends to review the current guidance on multi-agency case discussion,” it added.

Responding to the review, Clare Coghill, the leader of Waltham Forest council, said the authority “owe it to [Jaden’s family and freinds] to make sure the lessons learned from his murder prevent more children’s lives being cut short”.

Coghill said the council fully accepted the review’s findings, which also called for tighter regulations around home schooling in order to combat the risk of children being drawn into criminal exploitation.

“The report highlights the need for more national action and better communication between all agencies to tackle the scourge of county lines drug dealing gangs who are creating misery and exploiting vulnerable young people across the UK,” she said. “If the Government can take action to ensure that there is a co-ordinated nationwide effort to tackle the county lines gangs, we can all work together to better protect children like Jaden from criminal exploitation.”

ADASS president: social care can’t go back to austerity post-Covid crisis
Most social workers say Covid-19 has negatively hit their work and the lives of those they support