Number of children in need falls for third straight year, to lowest point since 2013

By Rob Preston on November 4, 2021 in Children, Social work leaders 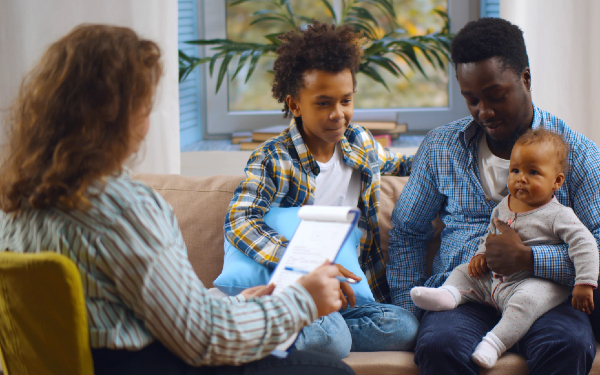 This article has been amended to clarify the position taken by the Independent Review on Children’s Social Care in relation to the recent trends in children’s social care.

The number of children in need in England has fallen for the third successive year, to its lowest level since 2013, according to official government figures.

Figures from the annual children in need census, covering the year to 31 March 2021, also showed that referrals to children’s social care and child protection plans fell sharply during the first year of coronavirus restrictions in the country.

Closures due to lockdown measures during this period led to a 31% decline in referrals from schools and a 7% decrease overall, which contributed to the falls in interventions.

But referrals had also declined in the previously two years, as had the number of child protection plans (CPPs) and overall number of children in need.

Recent Department for Education data also shows that referrals have continued to lag behind the average for previous years in 2021 as society has opened up. Its regular vulnerable children and young people survey, tracking councils’ response to the pandemic in children’s social care, found that the number of children taken into care from May 2020 to July 2021 was about 29% lower than equivalent periods from 2017-20.

This previous trend, accompanied by a shift in spending from early help to statutory services, was highlighted by the care review in its ‘case for change’ report in June. In the context of the increased number of child protection enquiries that did not result in a child protection plan, review’s lead Josh MacAlister, has repeatedly warned that children’s services are over-intervening in family life without providing enough support to help them meet their needs. He has also argued for a shift in resource towards early help from later intervention services.

The latest statistics suggest local authorities’ approach may be changing. Speaking at Community Care Live last month, the government’s chief social worker for children and families Isabelle Trowler questioned whether more recent trends were due to children’s services not recognising harm or that they were supporting families differently during this period.

There were 388,490 children in need – which includes children subject to child in need plans, CPPs, looked-after children, young carers and disabled children – as of 31 March 2021, the third successive yearly decline but only a moderate decrease from the year before. 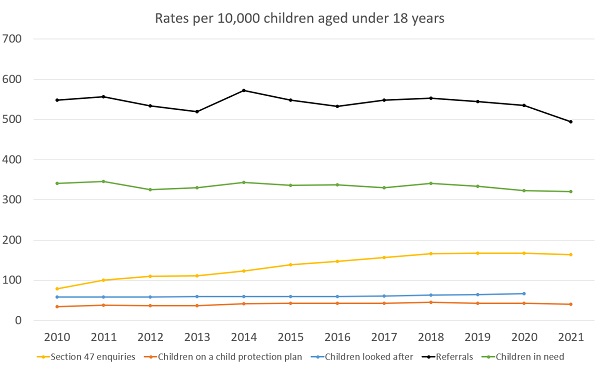 ICPCs are held when concerns that a child is suffering, or likely to suffer significant harm, are substantiated following a section 47 enquiry. The proportion of section 47 investigations that have led to an ICPC has declined steadily from 47% in 2012-13 to 37% in 2020-21.

Concerns about the child’s carer being the victim of domestic violence remained the most common factor recorded by social workers in their assessments in 2020-21, being identified in 168,960 assessments, a third of those with factor information.

The next most common factor was concerns about the mental health of the child’s carer (157,600), followed by emotional abuse (107,140). These have remained the three most recorded factors since 2018.

The census report noted that social workers’ record keeping of relevant factors in children’s cases had improved, which it said may have led to some reported increases.

In response to the statistics, a government spokesperson said that the care review would “address the sector’s major challenges as part of its wholesale review of children’s social care”.

4 Responses to Number of children in need falls for third straight year, to lowest point since 2013