Social Work England calls on practitioners to share information on protected characteristics to help shine light on disparities, but BASW and SWU urge immediate action to tackle "known issues of inequality" in profession

By Mithran Samuel on February 18, 2022 in Workforce 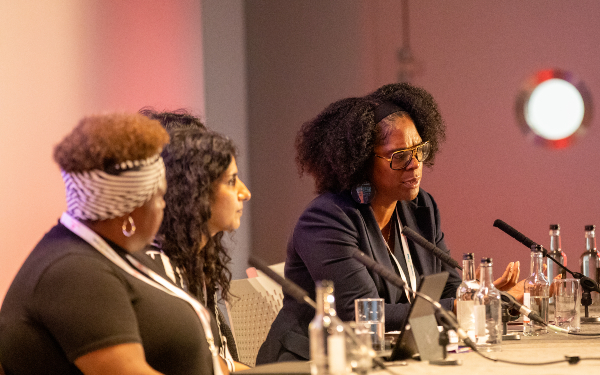 Shantel Thomas, of BASW, (right) has said Social Work England can do more to tackle racial inequalities after the regulator's head of equality, diversity and inclusion, Ahmina Akhtar (centre), launched its action plan on the issue. They are pictured with Millie Kerr, anti-racist lead practitioner at Brighton & Hove Council.

The lack of data on the profession’s diversity is hindering Social Work England’s efforts to tackle inequalities in the fitness to practise system, the regulator’s equality lead has said.

Ahmina Akhtar called on registered social workers to share data on their protected characteristics to enable the regulator to identify the scale of inequalities and how to tackle them, in an interview to mark the launch of its equality, diversity and inclusion (EDI) action plan last week.

Just 4% of registrants have submitted their diversity data through their online accounts with Social Work England. Without more doing so, the regulator would be unable to draw “reliable conclusions” about the impact of its activities on different groups, added Akhtar, appointed last year as its first head of EDI.

However, in response, the British Association of Social Workers and Social Workers Union said action should be taken now in relation to “known issues of inequality”, notably, the disproportionate impact of fitness to practise cases on black and ethnic minority social workers.

This was an issue raised by Social Work England itself in July 2020, when its executive director for fitness to practise, Jonathan Dillon, said practitioners from minority groups were disproportionately represented in referrals. He said the regulator did not have precise data on this or evidence on how it treated registrants from different groups through the fitness to practise process, but was committed to action on the issue.

‘We haven’t got as much data as we would like’

Social Work England’s EDI action plan includes an objective to “use available diversity data to identify and monitor any disproportionate impacts of our work on different groups and take steps to understand and deal with potential bias and discrimination”.

This encompasses measures to ensure EDI issues are referred to its decision review group, which scrutinises fitness to practice decisions, and to commission research on a sample of cases to identify any themes related to social workers’ protected characteristics in referrals from the public. This is due to take place at the start of near year, budget permitting.

More broadly, the regulator has revised its approach to assessing the impact of its work on EDI and is training staff in this.

However, Akhtar said the lack of data on the profession’s diversity was a block to taking further action in addressing inequalities in fitness to practise and its other regulatory activities.

Learning for social workers on EDI

Community Care’s inaugural Festival of Learning is full of learning on equality, diversity and inclusion from expert speakers. Our virtual event runs from 28 March to 1 April, and includes webinars on:

Register now to book your place on these or other sessions. We are offering three sessions for free – courtesy of sponsors Surrey County Council, the London Borough of Barking and Dagenham and Medway Council. Other sessions cost £25 + VAT each.

“We haven’t got as much data as we would like. Having that data will enable us to analyse and understand and, if necessary, revise any systems or policies, or look at any trends or differences in outcomes for people with protected characteristics,” she said.

Social Work England called on registrants to submit their data as part of last year’s registration renewal period, from September to November, and also last June, when it simultaneously launched a survey on experiences of racism in the profession.

However, just 4% of England’s roughly 100,000 registered social workers have done so, and Akhtar urged others to follow suit.

Under the action plan, Social Work England will review, early next year, how it seeks diversity data from social workers in order to increase the response rate, and that it would make use of key “communication and engagement moments” to encourage practitioners to submit.

“To be able to draw reliable conclusions about our processes and fitness to practise referrals we would need that data,” said Akhtar. “Without it, it would be very challenging.”

However, while welcoming the plan, BASW’s anti-racism lead, Shantel Thomas, said the regulator should go much further, saying “everyone knows” about the disproportionate impact on black and ethnic minority staff of fitness to practise cases and other issues.

“Eighty per cent of the referrals we get to [BASW’s] advice and representation service are to do with race,” she said. “Social workers are failing their ASYE and being disproportionately hit by fitness to practise…The number who are being referred for disciplinary action is massively disproportionate.”

“I don’t think it goes far enough,” she added. “What I would expect from a regulator is a zero-tolerance stance.”

Thomas said “mistrust of authority” may be behind black and ethnic minority social workers not submitting their diversity data.

“[People ask]: ‘What are they going to do with the data? We already know the system is systemically racist. We don’t need the data to do tell us that’.”

For the Social Workers Union, general secretary John McGowan said the regulator’s plan “rightly highlights the need to co-produce work with people with a range of protected characteristics, and to embed EDI across the profession from social work courses to organisation cultures”.

But he said it was important that “known issues of inequality – such as black and ethnic minority social workers being over-represented in fitness to practise cases and also facing disproportionately white adjudication panels – are addressed without delay”.

Data released by the regulator in 2020 showed that 80% of independent adjudicators sitting on the regulator’s fitness to practice panels were white, with 18% from black, Asian, mixed-race or other backgrounds. This is below the proportion of non-white social workers in the profession, which was 22% in statutory children’s services and 27% in adults’ services as of September 2020.

Akhtar said this was among the steps it was taking to tackle fitness to practise inequalities.

Thomas also criticised the plan’s lack of reference to anti-racist practice, and Social Work England’s failure to incorporate the concept into its professional standards.

The standards currently require social workers to “recognise differences across diverse communities and challenge the impact of disadvantage and discrimination on people and their families and communities”, and to “promote social justice, helping to confront and resolve issues of inequality and inclusion”.

But they make no direct reference to anti-discriminatory, anti-oppressive or anti-racist practice. The EDI plan includes an objective to develop learning outcomes for what should be expected of social workers, on qualification, including in relation to equality, diversity and inclusion and anti-oppressive practice.

In response, Akhtar said: “As a regulator, Social Work England has set out professional standards that require social workers to ‘confront and resolve issues of inequality and inclusion’ and ‘challenge the impact of disadvantage and discrimination’. We expect social workers to consider all forms of discrimination when they are applying these standards to their daily roles. Our action plan addresses many different forms of inequality that people with lived and learned experience of social work encounter.

“Our focus remains on all issues relating to equality, diversity and inclusion in order to have the biggest impact on people’s lives. Race is important. So is disability, neurodiversity, religion, and all the other topics that EDI encompasses. We know that we can’t achieve change alone and we know that we can’t achieve change by looking at just one piece of the puzzle. The key is a large scale, coordinated effort where the sector works together for lasting change.”

Social workers urged to ‘not leave it until the last minute’ as registration renewal opens
Celebrating a mindset, not a model, of social work
Social care staffing situation continues to deteriorate, show latest figures

34 Responses to Action to tackle fitness to practise inequalities limited by lack of data on social workers, says regulator