Social work turnover, along with agency use, vacancies, sickness absence and caseloads, now higher the worse a council’s Ofsted grade, prompting calls for inspection regime to be overhauled

By Rob Preston on May 6, 2022 in Children, Social work leaders, Workforce Turnover at English councils currently rated inadequate by Ofsted increased by 4.6 percentage points on average, from 2019-20 to 2020-21, more than double the 1.9-point rise nationally that took turnover to 15.4%, the highest in five years. Three of the 19 current ‘inadequate’ authorities acquired their ratings after September 2021, the end of the period covered by the turnover data.

The average turnover rate was relatively static at councils now rated requires improvement, while it rose by 2.1 points at ‘good’ authorities and by 1.7 points at those now graded outstanding, found our analysis of current Ofsted ratings and Department for Education workforce data.

Unlike last year, when we carried out a similar analysis, there is now a clear relationship between Ofsted grade and turnover rate: the higher the service’s inspection rating, the lower its social worker churn in 2020-21.

As was the case last year, the higher an authority’s Ofsted grade, the lower its agency worker, vacancy and sickness absence rates, and caseloads, as measured by the DfE. 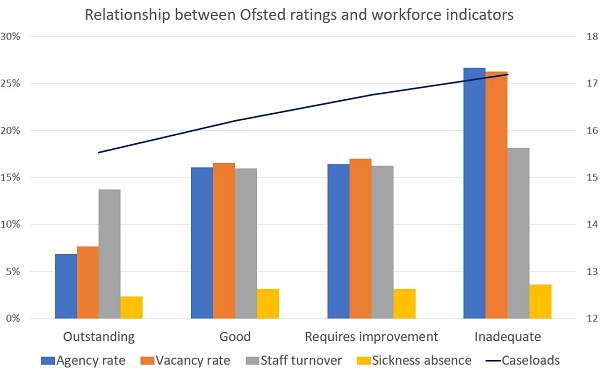 The findings prompted calls for Ofsted’s inspection regime to be reformed to ensure that it did not deepen the sector’s retention problems, ahead of the forthcoming report of the children’s social care review.

The review has implied it may recommend changes by highlighting the impact of negative Ofsted ratings on retention and by questioning the current inspection regime’s value in assessing what matters to children and families.

Ofsted has pledged to reassess its inspection regime in the light of the care review’s recommendations and, in response to our analysis, said that it recognised that workforce pressures were greater at ‘inadequate’ councils.

While the DfE data showed the national vacancy rate rising from 16.1% to 16.7% from September 2020 to September 2021, the gap between the best and worst-rated authorities grew.

Those now rated outstanding bucked the national trend by reducing their average vacancy rate by 1.5 point to 7.7%, while the average rate for currently ‘inadequate’ councils grew by 1.9 points to 26.3%.

However, a sharp rise in vacancies among authorities now classed as ‘good’, amid a fall among ‘requires improvement’ councils, saw the middle two groups coalesce around the national average: 16.6% for ‘good’ councils and 17% for those rated requires improvement.

Use of agency staff remained the biggest divide between ‘inadequate’ and ‘outstanding’ authorities, with the former (26.7%) having average rates that were almost four times the latter’s (6.9%).

Again, there was compression in the middle, with those currently rated requires improvement seeing their agency rate fall by 0.9 points to 16.4% on average, with currently ‘good’ councils using more locums on average (16.1%, up from 14.5%).

Sickness absence also increased by the most at currently ‘inadequate’ authorities, with 3.6% of working days lost on average per full-time equivalent social worker in 2020-21, up from 3.1% for the same authorities in 2019-20. Rates flatlined at ‘outstanding’ councils at 2.4%.

‘Outstanding’ local authorities had an average caseload of 15.5, for ‘good’ councils it was 16.2, for ‘requires improvement’ authorities 16.8, and ‘inadequate’ ones 17.4 as of September 2021, according to the DfE. However, practitioners have criticised its measure as an underestimate and the department has said the figure should be treated with caution.

The findings chime with other data on the experiences of practitioners at differently-rated authorities. Notably, the latest wave of the DfE’s longitudinal survey of children’s social workers, published last year, found that staff in ‘inadequate’ authorities were more likely to work more than 45 hours a week (36%) than those in ‘outstanding’ (24%), ‘good’ (22%) or ‘requires improvement’ (26%) councils.

It also found that those at ‘inadequate’ and ‘requires improvement’ councils (70%) were less likely to find their jobs satisfying than those at ‘good’ (72%) or ‘outstanding’ (79%) authorities.

In response to our findings, an Ofsted spokesperson said: “All local authorities face challenges in staff turnover, vacancies and the use of agency staff, and we recognise that these are particularly difficult for those judged to be inadequate.

“We also recognise that, when a local authority is rated inadequate, and subject to the Department for Education intervention, it can lead to a regional, or sub-regional, challenge as it seeks to draw in staff from stronger surrounding councils to enhance its improvement journey.

“The availability of a stable, skilled workforce is one the toughest challenges facing the sector, particularly as we come out of the pandemic when many staff have reassessed their work and career priorities.

“Government – both central and local – need to work together to meet the needs of the sector.”

The figures come with the care review – led by Josh MacAlister – considering the future of Ofsted’s inspection regime for local authorities, ahead of its upcoming final report.

In the review’s ‘case for change’ last year, it said the sector was “over-reliant on Ofsted ratings as a metric of success” and questioned whether they “measure the things that matter to children and families”.

It also noted that turnover and levels of inexperienced staff were higher at local authorities rated ‘inadequate’, which it said created “a spiral of increasing workload pressures for the remaining staff”.

Since the case for change’s publication, social workers have made representations to the review on the need to reform the inspection regime, to tackle levels of paperwork, make practice less risk-averse and improve retention.

In its recently published five-year strategy, Ofsted pledged to review its social care inspection system in light of the recommendations of the care review, while our analysis prompted further calls for reform.

David Wilkins, senior lecturer in social work at Cardiff University, who has researched the factors driving Ofsted performance, said social workers did consider inspection ratings when choosing which council to work for, so ‘inadequate’ judgements could repel potential applicants.

“If you look at it from the perspective of an individual social worker, particularly if they are working in an area with lots of different local authorities, why wouldn’t you want to work for an authority that has been rated outstanding and has been officially recognised as providing good supervision?” he said.

Wilkins argued that this “knock-on effect” from Ofsted inspections meant the inspectorate’s current process should be reassessed.

“Ofsted’ ultimate purpose is to improve services, not just to inspect them,” he said. “So, I think you have to then ask, ‘is the current mechanism of inspection a good way of improving services?’ If it is leading to things like retention problems in councils that are already struggling, then maybe not.”

In its response, the Association of Directors of Children’s Services (ADCS) warned that “Ofsted’s use of a single word judgement for a complex set of services and differing local contexts tells at best a partial story and even risks weakening the very services the inspectorate seeks to improve”.

“That said, some local authorities do succeed in maintaining or restoring stability, despite a negative inspection outcome and many staff will stay and play their part in bringing about positive change,” she added. “We should be learning from these successes to see what measures can be applied more widely.

A spokesperson for the British Association of Social Workers (BASW) said performance ratings can “demoralise a workforce” and said more focus should be on “giving social workers quality time to do their job”.

“We know that environments where wellbeing and duty of care are paramount allow for good social work practice to thrive,” they said.

“For those that are struggling, we need to ensure they have extra support, funding and resources, mixed with strong leadership, to enable social workers to have manageable caseloads, good quality supervision and consistency within teams.”

Rick Hood, senior lecturer in social work at Kingston University, who has studied the impact of Ofsted inspections, said there tends to be a spike in child protection interventions at all councils following inspections, but this increase is prolonged at authorities rated ‘inadequate’.

He said authorities rated inadequate tended to have increased vacancies and use of agency social workers the year after their inspection, while those rated good and outstanding would see a fall.

Hood’s research has found that inadequate-rated authorities tended to have higher levels of deprivation and potentially more children in need per social worker. This resulted in practitioners having higher caseloads, in turn causing greater workforce instability, vacancies, and sickness.